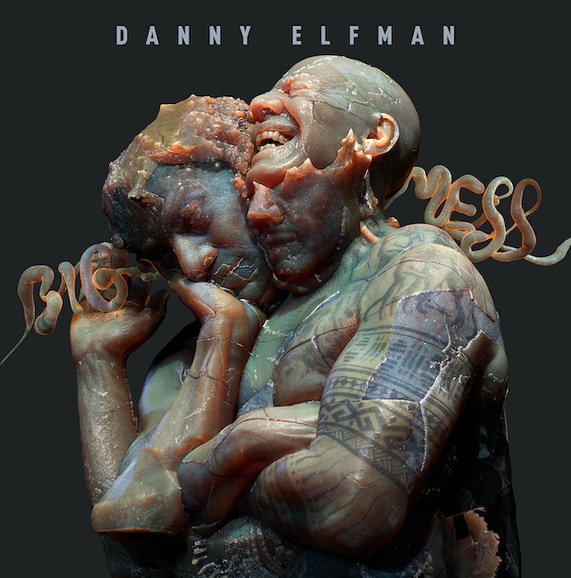 You can’t say you didn’t see it coming. The title of Danny Elfman’s first non-soundtrack solo project in 37 years, like much of the album itself, can either be seen as cloyingly on-the-nose or perfectly fitting: Big Mess. The striking cover artwork, which was created by Sarah Sitkin and transforms 3D scans of the composer into a disturbing digital sculpture, also prepares you for the overarching mood of the album: thoroughly creepy and bizarre, Elfman’s many sides colliding into one inscrutable package. Even as his appearance is distorted, he still remains at the center of it all: “I knew from the start that this wasn’t going to be a neat, easy-to-categorise record,” he said in a statement. “It was always destined to be this crazy cacophony because that’s who I am. The ‘Big Mess’ is me.”

Of course, Elfman is far from the first musician to capitalize on that messiness – much of his own celebrated work with director Tim Burton is built on subverting our perception of traditionally unattractive qualities and turning them into a source of compassion. On his latest effort, too, the music takes on an obviously cathartic role: Created almost entirely during lockdown in 2020, the album is the result of a spontaneous experiment that inexplicably took the form of a 2-sided project boasting 18 tracks – Elfman has compared the process to opening Pandora’s Box. The lack of a creative filter is partly what’s appealing about it, leading to a few scattered moments of exhilarating brilliance, but it’s also what makes Big Mess by turns insufferable, underwhelming, and exhausting. The keyword here isn’t just mess, but big mess.

The album’s most memorable songs are those that were intriguing as singles. One can hardly imagine a stronger return for Elfman as a solo artist than lead single ‘Happy’, which echoes the darker edges of the Nightmare Before Christmas soundtrack while infusing its theatricality with more of the rock instrumentation that bolsters much of the new record. A more interesting point of reference, though, isn’t rock music, but what Elfman calls “anti-pop” – it’s no surprise that highlight ‘Kick Me’ got the remix treatment by Death Grips’ Zach Hill. But where the best experimental pop feels liberating, the atmosphere on the album’s most hyperactive moments is more often oppressive, while the more conventional tracks, like the meditative, string-led ‘In Time’, offer little in the way of variation.

On a compositional level, Big Mess is technically flawless and mostly interesting, even if it’s best consumed in small doses. But what’s most likely to test your patience are the lyrics, which are topical in the most exasperating way possible: the worst offender might be ‘Love in the Time of Covid’, which opens with the lines “Living a life in a nutshell/ Stay inside and you’ll do well,” before devolving into, “Oh, she likes me/ Her videos excite me/ Under the virtual moonlight/ We got a date at midnight.” It’s like it exists in a parallel universe where Disney acquired the rights to Bo Burnham’s Inside, turning it into a Burton-esque (emphasis on esque) nightmare that’s naturally way less introspective and self-conscious than the original (that special is only 15 minutes longer than the entire album, by the way). It might not be supposed to invoke empathy, but even as satire, it’s a tough sell.

And that’s before we even get to the record’s political commentary, which is where it undoubtedly falters most. As a critique of the Trump era, ‘Serious Ground’ feels unoriginal and redundant in its vagueness; follow-up track ‘Choose Your Side’ sets an actual soundbite of Trump saying “It’s a great thing that’s happening to our country” against an industrial groove to evoke an ominous atmosphere of national division, but it falls short of suggesting much else. Then Side A concludes abruptly with the mournful ‘We Belong’, before ‘Happy’ comes to once again upset the flow of the album; in this context, the track is more baffling than satisfying.

Yet it’s hard to imagine longtime fans being disappointed by what Big Mess has to offer, which is everything one might expect from Danny Elfman and more – perhaps too much more. That directionless maximalism might be seen as a minor gripe for an album whose biggest strength is that it isn’t afraid to go completely off-the-rails. But really, after repeated listens, you start to question how much of it is done with an audience in mind, and how much of it is just for Elfman himself. “I take a weird pleasure to play things for people that they’re not expecting, so I always led the presentation with ‘Sorry’ because I just wanted to see their faces,” he said of trying to market the album to different companies. “It was almost like performance art. I’d look at their expressions, usually horrified, and take great pleasure at that.” That mischievous spirit is all but lost on Big Mess, but somewhere along the way, the thrill of it starts to feel curiously one-sided.

Album Review: Danny Elfman, 'Big Mess'You can’t say you didn’t see it coming. The title of Danny Elfman’s first non-soundtrack solo project in 37 years, like much of the album itself, can either be seen as cloyingly on-the-nose or perfectly fitting: Big Mess. The striking cover artwork, which was...