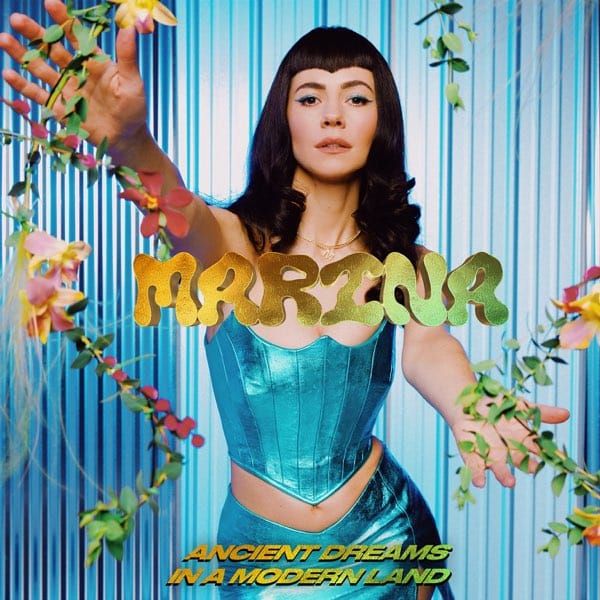 Marina Diamandis’ Ancient Dreams in a Modern Land marks the second album the Welsh-Greek artist released after dropping ‘and the Diamonds’ from her stage name. If 2019’s Love + Fear centered on emotional attachment and universal insecurities, Ancient Dreams serves as an exploration of society’s most pressing issues through an ecofeminist lens. Fusing her rich, angelic mezzo-soprano voice with the trademark electro-pop that made MARINA’s music widely acclaimed, her stirring commentary on recent turbulent years reveals how, in many ways, humanity has made little real progress. The artist’s unrelenting refusal to censor herself is what makes the project so melodically and lyrically memorable.

Kicking things off with the track that gives the album its name, ‘Ancient Dreams in a Modern Land’ is infused with disco beats and infectious, almost robotic harmonies. Gliding from throaty low notes to breezy highs in the chorus, Diamandis plants the central message that continues to unfold steadfastly in later songs: “We’re now living in a seminal age/ The walls are being broken and we’re ready for change.” The funk-driven, sassy ‘Venus Fly Trap’ builds on this momentum, packed with striking piano chords, punchy drums and a resentment towards patriarchal standards. Echoing the harsh sentiments expressed in her 2010 album The Family Jewels, MARINA calls out Hollywood for its unattainable ideals, this time celebrating the self-love that comes with distancing yourself from the entertainment industry. “Why be a wallflower when you can be a Venus fly trap?” she asks in a cold, snappy tone.

The sonically more mellow ‘Man’s World’ might just be the summit of the LP, exhibiting dramatically sharp lyricism, most notable in MARINA’s tongue-in-cheek reference to the Sultan of Brunei’s anti-gay penal code: “I guess that’s why he bought the campest hotel in LA then,” the artist mocks against a backdrop of animated guitar strums. Channeling a similar anger-turned-motivation, ‘Purge the Poison’ is a rapidly paced anthem bursting with intentionally frenetic energy. The track is not faultless: it’s hard not to be irritated by the incorrectly stressed syllables in the pre-chorus, and the overwhelming amount of social issues tackled makes each one, ironically, seem more trivial. Diamandis makes up for this with contagious sonic elements, though, as she creatively sings from the perspective of a damaged, wrathful planet Earth, chanting: “Need to purge the poison from our system/ Until human beings listen/ Tell me, who’d you think you are?”

The second half of the LP welcomes a reshuffling from political fury to personal heartbreak, but rather pales in comparison to the adventurous, vibrant introduction. The far sparser production on ‘Highly Emotional People’ creates swaying, soft melodies as Diamandis’ vocals dance with the piano and impart a heartfelt commentary on toxic masculinity, using poignant if rather unoriginal phrases: “People say men don’t cry/ It’s so much easier to just lie.” ‘I Love You But I Love Me More’ is further testament to the album’s impressive vocals and production rather than its lyrics, which unfortunately skate into clichés about doubting an ex-lover who claims to have changed. All the same, the final few vulnerable, euphonious piano ballads – largely inspired by the end of Diamandis’ longest romantic relationship – offer more facets to the project and neatly balance the sweeping intensity of the inceptive socio-political pieces.

‘Goodbye’, in particular, allows the listener to sit back and watch Diamandis’ sweet candour unfurl in what is simultaneously a breakup song and a shedding of old skin, as she bids her past self farewell. “Somewhere between new and old/ Another life waits to unfold,” she hums in the first verse; the charming conclusion to MARINA’s most daring work to date cements her place as an ever-changing, refreshingly innovative creator.