Damon & Naomi have announced a new album, A Sky Record, which is out August 6. The long-running duo of former Galaxie 500 members Damon Krukowski and Naomi Yang recorded the album with electric guitarist Michio Kurihara. Hear the new single ‘Sailing By’ below, and find the LP’s cover art and tracklist, too.

“”Sailing By” is also the title of a light classical waltz that’s played every night shortly before the 1AM end of the broadcast day on BBC Radio Four, followed by the “Shipping Forecast” Krukowski explained in a statement. “The Shipping Forecast is simply the weather forecast for the sea around the UK. But it’s also a mesmerizing list of place names (“Viking” and “Tiree” are examples) and slightly coded information about wind direction, etc. — it has its own language. But for some reason, Naomi and I found ourselves listening to it almost every night during lockdown… It comes on just as we’re usually cooking dinner, which is how we stumbled on it… and then this marker became important to us, even though (or because?) it’s a report about conditions for places we couldn’t possibly visit…”

Damon & Naomi’s last album together was Fortune, released in 2015. 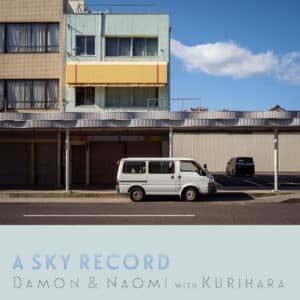 1. Oceans in Between
2. Between the Wars
3. The Gift
4. Sailing By
5. Split Screen
6. Season Without Time
7. Midnight
8. Invincible
9. How I Came to Photograph Clouds
10. The Aftertime