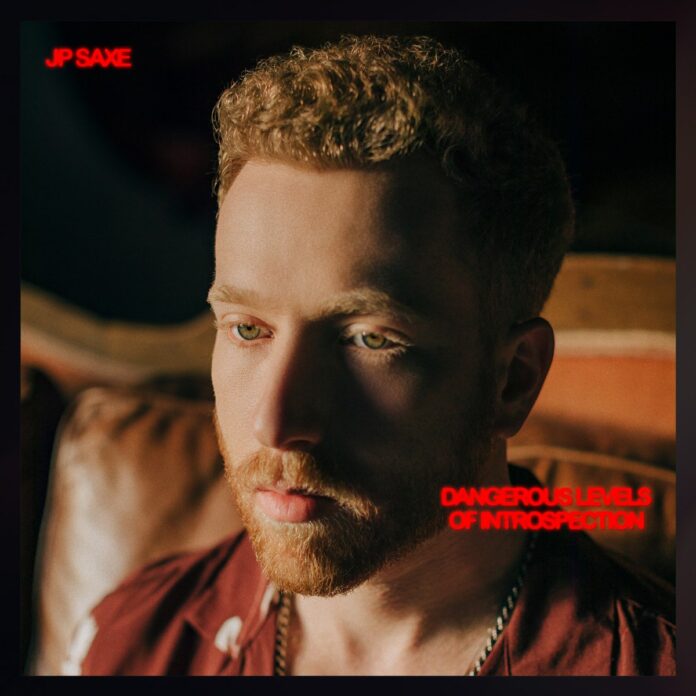 It was about as fortuitous as it can be for Canadian singer-songwriter JP Saxe to release his breakout single, ‘If the World Was Ending’, a matter of months before a global pandemic. In the music video, he clutches fellow artist Julia Michaels while sirens drone in the distance. “If the world was ending, you’d come over,” Saxe implores, with desperation and tenderness synthesised into the single syllable of the word “Right?”. It seems catastrophe leaves no time for hesitation, forcing a unique kind of directness. And yet emerging from what many would deem a real-life apocalypse, in his debut album Dangerous Levels of Introspection Saxe abandons the urgency with which he dealt so prophetically. This time, he is preoccupied with gathering exactly the right words.

The album opens, however, with explicit contradiction. Amid a growling drum beat and bursts of jazzy piano melodies, Saxe declares, “I just want to hold you/ It doesn’t have to mean anything,” before reasoning: “I don’t think that it can not mean anything.” His lyrics are built on these small incongruities which merge and shift with the force of his unrelenting self-analysis. He betrays a rigid devotion to truthfulness, even if there is little order to be found among his utterances. Moments of clarity, then, blaze all the brighter when able to surface: “You’re the first thing I don’t second guess,” Saxe announces triumphantly in early single ‘Like That’, spurred on by layers of acoustic guitar and increasingly energetic drums.

For an artist so captivated by language, it is unsurprising that Saxe places extraordinary weight on the power of a connection figured specifically in verbal terms. “Gonna need you to explain exactly everything those eyes mean,” he sings in ‘More of You’, before proclaiming, in a delightful second of drumless temerity that is the sonic figuration of a leap of faith: “Nevermind/ Surprise me.” Where at times his craving for accuracy ironically topples into inconsistency, his profundity still glitters. “I probably love you, but it freaks me out sayin’ it,” he confesses in the same track, “This feels too different to have the same name for it.” He might not have all the answers, but he is eloquent even in his uncertainty.

The record’s probing examination of expression is tugged along further by twanging guitar riffs in ‘Here’s Hopin’. “When somebody asks you/ Do you think it’s really over/ Do you say it is?” Saxe wonders. “Do you think it is?” To be so fixated on aligning his feelings with the correct definitions is, it seems, both empowering and exhausting, but Saxe’s capacity for reflection appears limitless. Contemplating a surrender to the numbness of heartbreak, he admits, “Getting over you just feels like one last way that I’ve got left to lose you,” and this is perhaps why the record tunnels so deeply into the past. The pleasant ache of nostalgia is tangible in nearly every song, though lyrically it is most explicit on the title track: “I don’t want any of it back,” Saxe insists, “But I miss how it felt/ It happened so fast, I kinda miss myself.” The harmony-drenched grandeur of the singles is often suspended to prioritise simple guitar backing and create a charming, emotive pop feel. Even Saxe’s angrier monologues usually open with uncomplicated instrumentals which pivot into cacophony. ‘Tension’ chronicles the tail end of a relationship by way of taut vocals and drums that repeatedly gather and recede, shaping a series of false endings that reenact the pain of moving forward.

Yet the frenzy falls away into Saxe’s familiar territory of jazzy keys, spilling over into ‘What Keeps Me From It’, a ballad that tackles similar subject matter with gentleness rather than fury. It is in this track that Saxe’s storytelling really shines. “It’s unlikely there is a version of this/ That’s not gonna tear me apart,” he muses, striking a perfect balance between bluntness and poeticism. With murmured vocals and pirouetting piano melodies, it is as if Saxe is wandering through the ruins of a relationship as the walls crumble gracefully around him. “Maybe you’re not love anymore,” he decides, “Maybe you remind me of it.” There emerges a hint of wonder that comes with coaxing beauty from something broken.

Nowhere is this clearer than in the album’s final offering, ‘Sing Myself to Sleep’. Written as a tribute to Saxe’s mother, who recently passed away, the track sees him gather up his powers of rumination to create a lullaby laden with sadness. “I’m okay, but that’s not the point/ And either way, I’m still your boy,” he sings, and the track unfolds in the negative space created by loss, blossoming into an unlikely source of light in the black hole of bereavement. With heartbreakingly tender falsetto held aloft by celestial harmonies, Saxe’s grief is palpable. Yet he seems to have finally found a way to express the incommunicable. His musings may not always be perfectly coherent, but they are undeniably earnest, and though apparently perilous, his introspection has certainly not gone to waste in this debut.