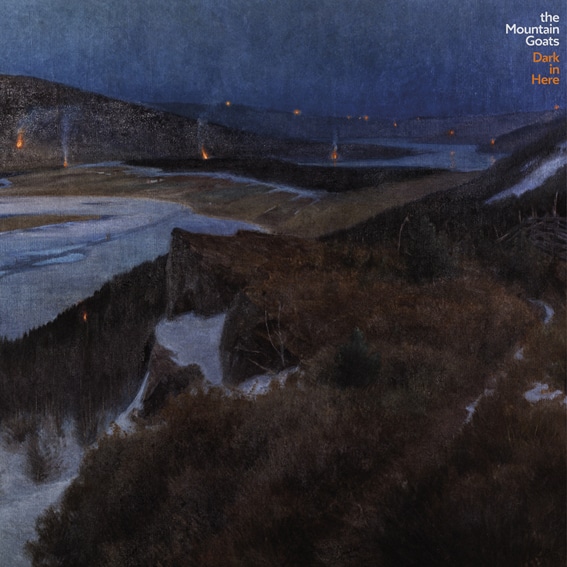 The Mountain Goats have come a long, vibrant way since the emergence of John Darnielle’s project in 1991. The new 12-track album Dark in Here, brought to life by Darnielle, John Wurster, Peter Hughes, Matt Douglas and several guests, epitomises the buoyant power of collaboration. Speaking to their productivity amidst the pandemic, the record marks their fourth release in just over a year, yet shows no signs of burnout. Dark in Here can certainly be categorised as one of The Mountain Goats’ more understated albums, but it’s distinctively gloomier, more multifaceted and arresting than its 2020 predecessor Getting Into Knives. This time, the band hones in on catastrophe; characters are never quite at the centre of disaster, but find themselves either in its anticipation or aftermath.

Acoustic guitar strums, maracas, and dissonant piano chords envelop the short and fast-paced opener, ‘Parisian Enclave’. The lyrical subject finds himself amongst a group of men working in the sewers beneath the streets of Paris, “in the neverending shadow.” The theme of darkness makes an immediate appearance, then, and is compounded by the cult-like undertones created by a religious lexical field referencing hymnals, devils, and brethrens. Nonetheless, a sense of warmth and kinship manages to slip in, as Darnielle compares the surrounding walls to “a mother who protects the young.” Even the decidedly heftier follow-up, ‘The Destruction of the Kola Superdeep Borehole Tower’, addresses but does not collapse in gloom. The minor-key track, whose name alludes to the Soviet Union’s attempt at drilling as deep as possible into the Earth’s crust, is heavily rock-influenced, noticeable in its use of electric guitar and thumping drums. Mostly written in imperative form, ‘Destruction’ follows The Mountain Goats’ theological thread, often sounding like a sermon: “Show thе world your true face/ Burn such fuel as you need to burn/ Learn to wait your turn.”

The middle of the record sees an elegant leap towards jazzy melodies. Likely a reference to the Reptilian Conspiracy, ‘Lizard Suit’ is patient and absorbing, swirling with smooth harmonies and soft cymbal brushes. The possibly neurodivergent narrator feels foreign in his surroundings and highly untrusting of others: “Almost invisible aboard the train/ So many people who you just can’t read.” The track stumbles into sonic cacophony in its final moments, with only the bassline striving desperately to maintain coherence. All this serves as a great set-up for the slow, woodwinds-infused energy of ‘When A Powerful Animal Comes’ as well as the sparse, calming production of ‘To The Headless Horseman’, which accommodates a sentimental bridge: “But a stranger’s just a friеnd who hasn’t shared their secrеts yet,” murmurs Darnielle, his voice cloaked in silky piano.

In fact, despite the always heavy and sometimes extremely distressing themes of Dark in Here, the majority of the album is kept afloat by sympathetic, tender sounds. ‘Mobile’ is a gentle folk song saturated with country elements, emphatically adopting a slower tempo and a lower, calmer register. Heavily based on the Book of Jonah, the track serves as a continuation of the story after Jonah chooses to disobey God’s command, refusing to prophesy the destruction of a town. Thematically analogous to The Mountain Goats’ 2020 release Songs for Pierre Chuvin, insistent drums pound away in ‘Before I Got There’, as Darnielle writes from the perspective of a narrator having just returned to a holy place only to find it in complete ruin and disarray, its inhabitants’ bodies “in the pit behind the altar.” The unsettling story, flooded with discomposure and guilt, is counterbalanced by the lulling fusion of flute, piano, and clarinet which adorns the song.

Clarinet is, similarly, one of the central features of the penultimate ‘Arguing with the Ghost of Peter Laughner About His Coney Island Baby Review’. Emerging towards the very end of the project, the song is a heavily acoustic, breezy tribute to Cleveland musician Peter Laughner, who happened to write a stinging review of Lou Reed’s ‘Coney Island Baby’ in 1976. The track gives Darnielle yet another chance to showcase his brilliant songwriting as he croons over muted guitar strums: “Systems closing down on several fronts/ You will always have been here once.” Indeed, the penultimate piece mirrors the record as a whole: rooted in pain, but gracefully elevated in purpose and resilience.

Album Review: The Mountain Goats, 'Dark in Here'The Mountain Goats have come a long, vibrant way since the emergence of John Darnielle’s project in 1991. The new 12-track album Dark in Here, brought to life by Darnielle, John Wurster, Peter Hughes, Matt Douglas and several guests, epitomises the buoyant power of...