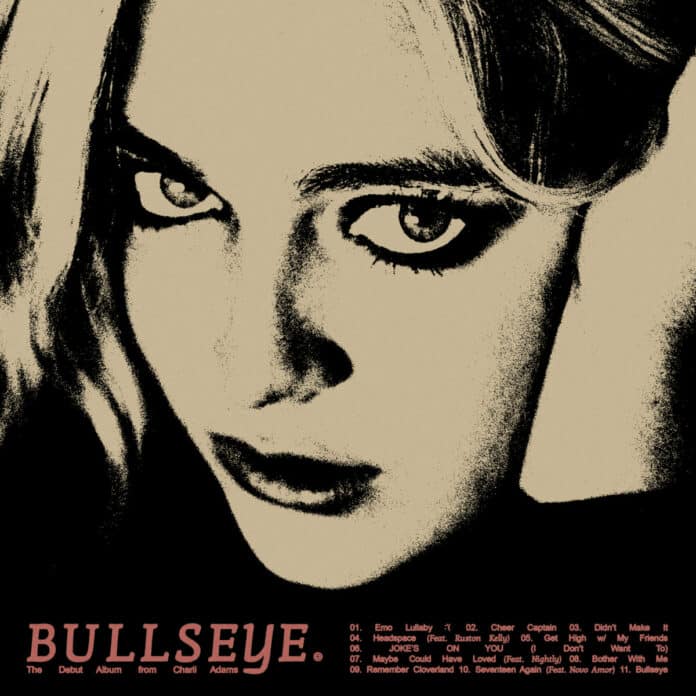 Despite Charli Adams’ 2020 EP, Good at Being Young, marking the singer-songwriter as a kind of millennial mouthpiece, her debut album, Bullseye, opens with an apology for the stories she has yet to tell. “It’s all spilling out/ Sorry for oversharing,” she intones as soft electric guitar melodies curl around her mournful vocals. And yet the album’s eleven offerings are neither messy nor excessive. Synthesising emo, grunge, and ’80s electronics into a chromatic and ever-surprising sonic backdrop, Adams retraces her trauma until she ventures upon shining moments of confidence.

The opener, in line with Adams’ apologetic tendencies, undercuts its own solemnity with the title ‘Emo Lullaby :’(‘. The result is a deceptively earnest ballad with piercing observations and falsetto yearnings reminiscent of Phoebe Bridgers. Muffled harmonies and hints of distortion create the sense that Adams is projecting her tender vocals across a great distance, like ribbons of light shooting across a black sky. There is certainly the impression that an absence is trying to be filled here; “Never liked silence too much/ It tends to scare me,” Adams admits, but her silences are perfectly populated with crackling guitar and slick drums. ‘Cheer Captain’ provides a dose of punk with powerful strings and a more lively beat that reinforces Adams’ attempts to overwrite her vulnerability. In a piercing yet delicate moment she notes, “I’ll take it all off so he says that he wants me/ ‘Cause I’m a people pleaser,” adding later, “I don’t wanna be her.”

Such a desire for urgent change haunts Adams in most tracks, snowballing, often, into painstaking self-criticism. Amid patterns of whirring synth and keys in ‘Didn’t Make It’, an early single, she deplores, “I was looking desperately/ For something I would never see.” Yet, in this record, vacancy is always voiced with paradoxical precision. Even when looking into the past, nothing escapes Adams’ view: “You forgot but I remember/ Everything about it now,” she sings in the next track as frenetic guitar is smoothed out by her airy falsetto and the velvety vocals of Ruston Kelly. For all the chasms and fault lines Adams attempts to cross in these songs, there is a pleasing sense of fullness and vibrancy in even her gloomiest tales.

She is at her most spirited, however, when returning to the roots of her previous EP and chronicling her not-so-distant youth. In the anthem ‘High w/ My Friends’ she laments, “I was so good at being young/ Now I’m growing up,” but she is proficient in sketching her teenage days in all of their chaotic glory. Spurred on by a snappy digital drum beat and snatches of twinkling keys, Adams conjures a dance-pop portrait of recklessness and spontaneity that wrestles with its own fleetingness. “What if we sit in the moment and feel it/ Watch our shadows on the ceiling,” she proposes, “God knows I need it right now.” She opts for an even more colourful disco feel in ‘Remembering Cloverland’, which layers keys and flurries of synth with buzzing guitar solos to give the sense of bright planets dancing in orbit. “We made it magic, but what a shame/ The days are fading away,” she remarks, but affirms in a rush of elation, “If we could go back, baby, we would do it the same.”

But youth, in Adams’ eyes, is dangerously volatile; scenes of innocence and warm nostalgia are noticeably absent in the later track ‘Seventeen Again’, which betrays the burdens of adolescence. “You’re all I’ve ever known/ I’m a tourist with a camera phone,” she sings, and the entire track – Adams’ most popular single – is imbued with an eerie sense of displacement (“I’m an echo,” she chants in the bridge) fortified by harmonies from Welsh singer and producer Novo Amor. Such hushed despondency also simmers in ‘Bother With Me’, which melds soft acoustic guitar with more glittering ’80s keys as Adams asks, “So what about me/ Makes everyone leave?” Desolation and uncertainty often threaten to swallow any flashes of assuredness, though empowerment endures in ‘JOKE’S ON YOU (I Don’t Want To)’ as Adams dismisses men who act “Like everything’s for sale/ But baby I’m not.”

Traversing such a wide expanse of experience is no mean feat, but Adams crafts her narratives with eloquence and the kind of emotional awareness that appears practiced but never forced. Closing the project, the title track gathers elements of both anguish and courage from its predecessors to create a sense of bitter determination, with more humming electric guitar ringing out after Adams’ vocals evaporate. Swinging between strength and fragility, then, seems to be her greatest accomplishment. For all of her doubt and detachment, she certainly hasn’t missed the mark in this debut.