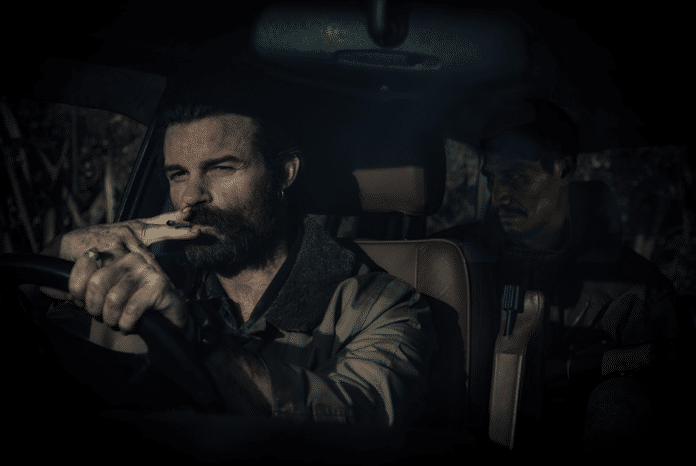 New Zealand’s Coming Home in the Dark is the first feature film directed by James Ashcroft, perhaps better known as an actor and most recognisable to international audiences for his minor role in the hit horror-comedy Black Sheep (2006). But there’s nothing funny about this powerful, nail-bitingly tense and disturbing road thriller, in which an ordinary family is subjected to a truly extraordinary ordeal in the desolate wilds of the Kiwi countryside. Our Culture reviews the film here as part of its selection from the 2021 Fantasia International Film Festival.

Hoaggie (Erik Thomson) and his wife Jill (Miriama McDowell) are enjoying an at least semi-relaxing hiking holiday with their two sons: sweet and sensitive Maika (Billy Paratene) and surly, aloof Jordan (Frankie Paratene). Having driven for miles, they park their car in a remote location and make the most of an overcast day in the middle of nowhere, eventually stopping to enjoy a picnic by the coast. As they enjoy the scenery, the family is approached by two intimidating strangers: Mandrake (Daniel Gillies) and Tubs (Matthias Luafutu). After some decidedly threatening small-talk, Mandrake pulls a rifle from beneath his tattered trench coat and demands the keys to the family’s car, their phones and their wallets. But what begins as a robbery turns into something far worse when Mandrake realises that there is something familiar about Hoaggie, and soon they are taking a fateful road trip together – their final destination a slowly unfolding mystery.

Once the film’s action moves into the unbearably claustrophobic space of a moving car, Coming Home in the Dark is immediately in danger of feeling a little too much like any number of other films in a long lineage of vehicular thrillers, from Detour (1945) and The Hitch-Hiker (1953) to In Fear (2013) and Alone (2020) via Road Games (1981) and The Hitcher (1986). Commonly, these films have concerned innocent people who are targeted by unbridled maniacs on lonely highways for reasons that, in the vast majority of cases, remain ambiguous at best. What is impressive about Ashcroft’s take on this well-worn formula, though, is that it cleverly subverts expectations, forsaking what could have been a derivative and generic road thriller and driving in a different direction.

Adapted from Owen Marshall’s short story of the same name, Coming Home in the Dark – co-written by Ashcroft and Eli Kent – puts its emphasis firmly on slow, methodical character development. While his costuming (by designer Gabrielle Stevenson) subtly recalls The Hitcher‘s John Ryder, we come to learn that Mandrake is far from an unknowable psychopath, while Hoaggie is not as innocent as he might first appear. As the film races towards its destination and we begin to understand why a loving family man is being subjected to protracted physical and psychological suffering, it becomes increasingly difficult to distinguish between heroes and villains in this complex narrative scenario. It is this moral ambiguity that makes the film feel refreshingly original.

Constant shifts in allegiance are aided by three excellent central performances. Daniel Gillies is particularly impressive as Mandrake, who is by turns sardonic, terrifying and surprisingly sympathetic; Matthias Luafutu, working with very little dialogue, manages to imbue Tubs with both a disquieting menace and a terrible sadness; and Erik Thomson’s Hoaggie effortlessly oscillates between righteous anger and self-pitying sorrow. All three characters share something in common that is evident in these nuanced performances: they are deeply haunted by past events that connect them together – and that they have struggled to forget.

All of this is not to say that Coming Home in the Dark doesn’t offer the genre thrills that one might expect from a road thriller of this type. There are plenty of suspenseful set pieces throughout the film, including a particularly anxiety-inducing sequence that takes place in an isolated gas station. But, as its mysteries are revealed, it becomes clear that this is a film to appreciate rather than to enjoy. It is brutally violent from the outset, and from there generates a relentlessly hopeless atmosphere that is aided by minimalist sound design (recalling 2007’s No Country for Old Men) and Matt Henley’s cinematography, which gives the wilds of New Zealand a truly bleak and oppressive quality. More gripping than it is entertaining, Coming Home in the Dark is harrowing, disturbing and not for the faint of heart – but will reward those who can stomach the journey.