Chastity Belts’ Julia Shapiro has announced her sophomore album, Zorked. The follow-up to 2019’s Perfect Version is out October 15 via Suicide Squeeze Records. Today’s announcement comes with the release of the new single, ‘Come With Me’, alongside a music video directed by Ertugrul Yaka. Check it out below and scroll down for the record’s cover art and tracklist.

Shapiro said of the new song in a statement:

Last September I went on a backpacking trip with my cousins, up in the mountains of Colorado, and one of the days we were out there we did mushrooms. I ended up having a pretty insane trip, but I had the worst time when I was coming up on them. I kept seeing evil faces in the mountains. This song was partially inspired by that experience, but it’s really about anytime I’m stuck in a negative headspace and spiraling out of control. It’s about giving in and letting your mind take you to the darkest places. The song itself is really evil sounding, with super dissonant chords, which inspired the darker lyrics. I’ve never written a song that sounds like this. This might be my favorite drumbeat on the album… it just gives the song a nice groove. Melina Duterte (who recorded/mixed the album) had the idea to add some staccato synth throughout the whole track, which adds another dimension to it.

Of the video, Ertugrul Yaka added: “Julia found me on one of the freelancer sites. It came as a surprise to me because I’ve been listening to Chastity Belt since 2016. So I know her from the Chastity Belt. It was a great experience for me. The video is about the war between good trips and bad trips. When you’re looking for joy, two kinds of feelings are always chasing you at the end. When you reach joy, a piece from your inside breaks off; I mean, it’s giving you something and taking another thing from your inside. I made this video based on my own experience.” 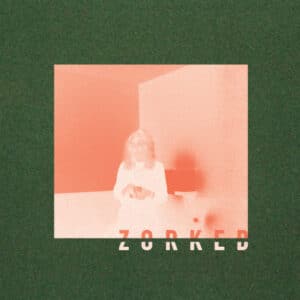