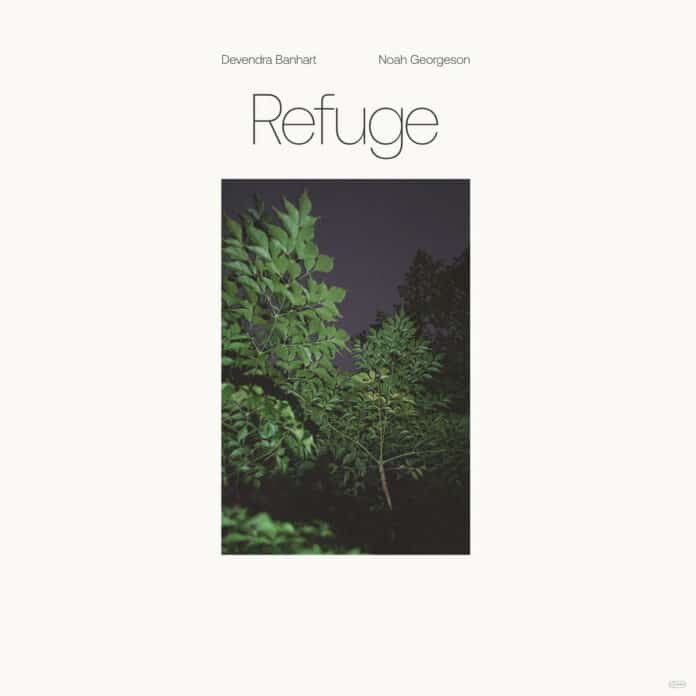 Devendra, I’ve a feeling we’re not listening to freak folk anymore. After gaining acclaim as the slightly comical but effortlessly talented pioneer of the genre in the mid-2000’s – not so much a pioneer as a sudden revivalist, as its lineage can be traced back to the wonderful Vashti Bunyan in the 1960s – Banhart has come a long way in the last decade and a bit. On Refuge, his collaborative album with frequent collaborator Noah Georgeson, there are no psychedelic flourishes or wandering acoustic guitars to be heard; instead the pair have created a delicate ambient record that seeks to be the sonic equivalent of its title.

It sometimes feels like the COVID-19 pandemic has aged us all quickly and terribly. There have been bouts of mourning for a way of life lost; we have grappled internally and externally with now existing in an even more fragile and uncertain world. A freak folk album, as reflective art, wouldn’t have made sense, but these soothing sounds do. It’s why Banhart said “we’re hoping to create a sense of comfort and coming back to the moment” about the album, which is, essentially, an elongated way of saying ‘Refuge’.

Banhart and Georgeson’s relationship stretches a long time back, when the idea of a life-altering pandemic would have been cause for scorn. Georgeson has co-produced several of his friend’s albums, including some of his finest (2007’s Smokey Rolls Down Thunder Canyon and 2013’s Mala). And it’s really not that much of an ungraspable sonic leap to Refuge either: Banhart has been steadily transitioning from freak folk since the start of the last decade, Mala, Ape in Pink Marble, and Ma all possessing more considered songwriting and melancholic notes. The beard has more flecks of grey, the thoughts are more pensive.

When considering an ambient record, it’s always helpful to return to the form’s greatest practitioner: “it must be as ignorable as it is interesting,” Brian Eno said, and on this front Refuge succeeds. It can be played under deep focus, as you look for lurking patterns and conjured emotions; it can also be supreme soothing background art, finishing its journey before you even really noticed it had begun. Its strength lies less in the qualities of the individual tracks than the collective picture that Georgeson and Banhart paint – that they recorded their parts separately during last year’s lockdowns is testament to their understanding of each other’s vision. They recruited a plethora of other wondrous musicians to embellish the canvas too, including Mary Lattimore on harp and Nicole Lawrence on pedal steel; their contributions might be minimal but they’re still felt. Flashes of strings and woodwind dip in and out throughout the haunting droning.

Refuge is entrancing and enveloping, its subtle strokes allowing for quiet rumination. One’s compassion for an ambient record like this will depend on their need for escapism, for refuge. Maybe this was the case for Banhart and Georgeson too: to witness two old friends, their artistic lives intertwined, come together at a most frightening time for contemplative collaboration, is a gift in itself.

Album Review: Devendra Banhart & Noah Georgeson, 'Refuge'Devendra, I’ve a feeling we’re not listening to freak folk anymore. After gaining acclaim as the slightly comical but effortlessly talented pioneer of the genre in the mid-2000’s - not so much a pioneer as a sudden revivalist, as its lineage can be traced...