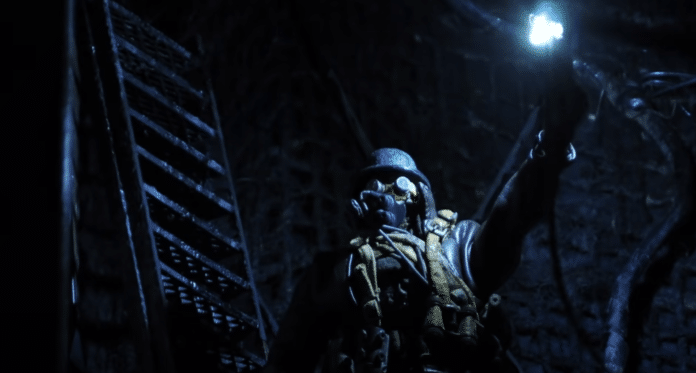 Fans of stop-motion animation, genre cinema, or perhaps just the original Star Wars trilogy will no doubt have heard of Phil Tippett. A master special-effects artist, Tippett’s work spans the mighty AT-AT walkers in The Empire Strikes Back (1980) to the imposing ED-209 of Robocop (1987). Initially shelved after he was called to work on Jurassic Park (1993), Tippett has been working on Mad God since 1987. Finally seeing the light of day, this stop-motion opus is astonishing. Our Culture reviews the film for its selection from the 2021 Fantasia International Film Festival.

The world of Mad God is one ravaged by an unknown war. A heavily-armoured soldier is placed inside a diving bell and lowered into the planet’s underworld. The soldier meets a slew of weird creatures, machines, and horrors. A worn-out map in hand, the soldier presses on with their enigmatic mission.

When watching this film, you’re immediately struck by its visual splendour. The stop-motion animation, puppetry, and miniatures are sublime on their own, but the design of the world is as disturbing as it is amazing. Twisted shapes dominate the foreground, framing awful atrocities to which the soldier bears witness. Straw men are produced to operate mechanical terrors of unknown purpose, only to die in the process; grotesque monsters kill each other without hesitation; skulls form a near-permanent part of the set design. The word “hellish” is an understatement.

This is a film with no dialogue, carried solely by its visual prowess. So much is communicated in the horrors we see unfold, from the cruelty that transpires under the cover of war, to the madness of those who wage it. Mad God almost has an anti-war ring to it. In its abstract madness it presents the nightmare of what war does. Nobody is human. Only monsters exist.

Even the soldier, the ostensible hero, never shows us their face. All we see is an imposing set of goggles beneath a helmet. The only separation between them and the monsters is that we spend more time with the soldier.

But don’t let my interpretation get in the way of what you take from this film. In Tippett’s own words, “the final form of Mad God is the memory after you watch it, like waking up and exploring the memory of a dream you just had.” That really is how Mad God feels: like a dream. Bits and pieces of inexplicable madness that form a narrative coherent only to yourself.

The radicalism of the finished film is matched only by its own production. In an interview for The Guardian, Tippett explained how he’d become disenfranchised with Hollywood. In fact, he considers Starship Troopers (1997) to be the last film he was proud to have worked on. For Mad God, his crew were largely artists who had grown up on his earlier work, and Tippett even pooled talent from students. Not bothering with studio backing, Tippett funded the project’s completion through Kickstarter.

Though Tippett faced personal battles of his own during production, a stop-motion film of this calibre, made without studio backing, and partially crafted by young artists points toward a more hopeful way of making movies – even if the look and feel of Mad God are anything but.

Album Review: Regina Spektor, ‘Home, before and after’