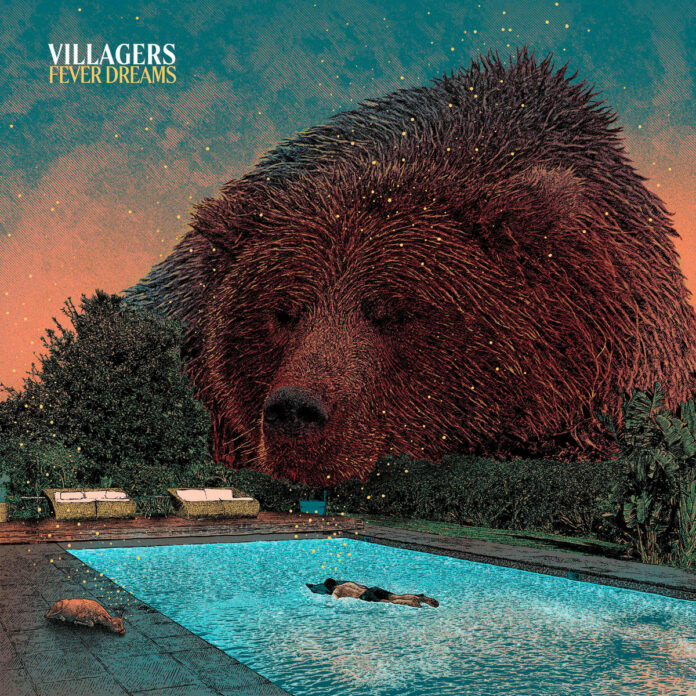 The title of Villagers’ fifth record, Fever Dreams, may imply a listening experience that leaves you feeling under the weather, but the effect created by lead musician Conor O’Brien is quite the opposite: each track brims with the energy of pirouetting keys and ebullient saxophone solos. Spanning the last decade and earning him an Ivor Novello award, the Choice Music Prize for Irish album of the year, and two Mercury nominations, O’Brien’s previous projects showcase a kind of dusky, earnest indie-folk. This release, however, ventures into altogether more radiant territory, conjuring a sonic dreamworld.

The opening tracks usher in layers of fantasy by contemplating a “sense of something bigger than you.” O’Brien’s vocals seem mournful at first, backed by reluctant strings and wistful sax melodies, but the sounds gather into churning static that quivers with promise. The next track, early single ‘The First Day’, prolongs this feeling of destabilization until buzzing guitar chords are suddenly abandoned in favour of shimmering xylophone and exultant drums. “Feels like a riverboat as it takes you to the sea/ Feels like floating on the essence of a dream,” O’Brien sings, and a magnificent brass section magnifies his jubilation. The track evokes an image of light erupting from shadows, patterns exploding behind closed eyes, all colour and warmth and wonder.

‘Song In Seven’ offers slow, ambling drums that carve out a wider space for O’Brien’s storytelling. His lyrics are often saturated with metaphor, but he is skilled in crafting narratives that are self-reflective without being saccharine. “It was a very good sea/ And it covered all of me/ My head to my toe/ My heart to my soul,” O’Brien murmurs, “I asked it to breathe/ It answered me.” Whether in dialogue with the sea or himself, there is a sense of elation and buoyancy here; layers of strings and pitched-up vocals establish a sense of spirituality, a feeling of being gently nudged by the tide. More strands of sax eventually take over, providing an indulgent ending that glides into the twinkling xylophone of ‘So Simpatico’. This track is bewitching in its smoothness and almost utopian in its charm, as O’Brien muses, “Little did I know you were here all the time/ In the garden you’d lie/ In the depths of my mind.” Keys and airy backing vocals make for delightfully easy listening but there is no trace of hollowness or inanity. An opulent four-minute sax solo enters and seems to revel in its own extravagance; O’Brien’s portrait of paradise certainly isn’t sketched in pastel colours. The magic exists in the record’s vivid hues, its psychedelic richness.

This isn’t to say, however, that O’Brien does away with reality entirely. He welcomes flashes of frustration and difficulty with an eloquence and candidness that is strikingly comforting. “It’s the little things that devour/ The silly things that burn,” he admits in the opening lines, chronicling an “Underplayed sense of dread” that develops into thoughts of “The forest fire on the front page/ And how we’re all gonna pay.” Sparse piano melodies emerge and recede ominously, but a sense of serenity materializes in the chorus with the declaration, “But I think of you/ And it all goes away/ Momentarily.” In this light, the joyfulness of the previous tracks suddenly feels fragile, and the next song, ‘Circles in The Firing Line’, epitomizes the friction between optimism and anguish. O’Brien wields his poeticism with wit here, trilling, “A united state of demagogic logic awaits” before mourning, “I’m doing circles in the firing line/ And I’m only ever losing time/ In fact I’m late/ I’ve got a date with doom.” Perfectly capturing the entropic truths of modern life, O’Brien rounds off the track with a crazed guitar solo and distorted repetitions of the announcement “They’re fucking up my favourite dream.”

But the dream is not quite destroyed, or in any case it is resurrected in the remainder of the record. ‘Full Faith In Providence’ is an elegant ballad infused with brightness and hope: “The road is long, but I’ve got my good shoes on,” O’Brien quips in the first verse, and the rest of the track unfolds like a love letter. “May the road rise to meet you, darling/ And you learn to love it all,” he intones, his serenity heightened by the ethereal falsetto of guest vocalist Rachael Lavelle. The title track proffers meandering xylophone melodies and layers of dissonant electronics that create a whimsical underwater feel as O’Brien hums, “Fever dreaming of love/ Fever dreaming of home/ All will be well.” Though the fulfilment he craves may seem elusive, it thrives in these tracks, and it is at once refreshing and utterly hypnotic. Reality casts a long shadow, but the luminosity of this record remains.