Sub Pop has signed Aeon Station, the new project of The Wrens’ Kevin Whelan, whose debut album, Observatory, is set for release on December 10, 2021. Today’s announcement comes with the release of the new single ‘Queen’, which you can hear below.

According to a press release, the 10-track LP came together over the course of 14 years and consists of demos and sketches that were assembled and recorded largely by Whelan himself, with help from his Wrens bandmates Jerry MacDonald and Greg Whelan, as well as co-producer Tom Beaujour. His wife Mary Ann provided backup vocals on the record, too.

“It’s the best I’ve done and may ever do frankly,” Whelan stated. “It’s written over such a long period of my life. Music I did in the past was tinged with expectations or presumptions, but this time, it was just for me.”

The title of the album was inspired by Whelan’s relationship with his now eight-year-old son. “The moment you’re told your child is not ‘neurotypical,’ your whole world expands in ways you never imagined,” he explained. “Even though he doesn’t speak much at all, or look at anyone directly, you can see him observing everything around him. The album title reflects upon the stories within the songs — each one observing a certain situation or feeling.”

Of the new single, he said, “This song was inspired by one of my all-time favorite songs, ‘The Winner Takes it All’ by ABBA. It’s about betting on the real you. Like a game of high-stakes poker, you push all your chips to the center of the table and aren’t afraid to go “all in.” It starts with a solo vocal, framing the story to come, the drums then propel the song forward, with a force working its way to a climax of a repeating line – “You said it was all in.”

After forming in the late ’80s, The Wrens released two critically acclaimed albums, 1994’s Silver and 1996’s Secaucus, which were followed by 2003’s The Meadowlands. In a New York Times profile published yesterday, Whelan said Observatory resulted from the protracted process of making the follow-up to that album. Earlier this year, the group’s Charles Bissell said the album was finished, but no album materialized.

Observatory does not feature contributions from Bissell. “Charles wanted to feel more understood, more heard about what he contributed,” Whelan told NYT. “I was never against that, but when we started talking about how to do it, it got very drawn out and complicated.” 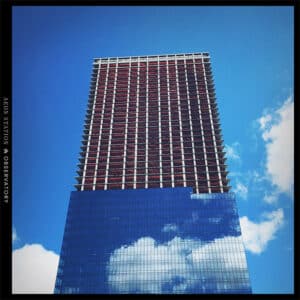