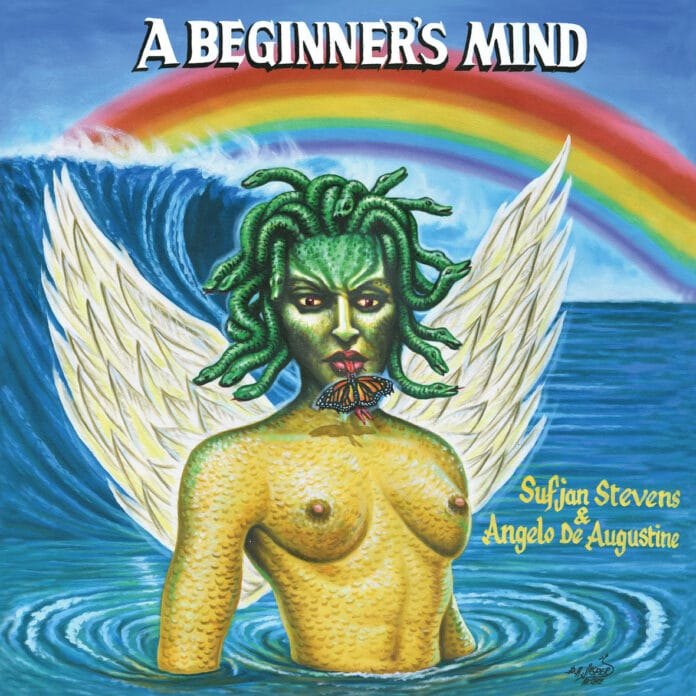 Sufjan Stevens and Angelo De Augustine’s first collaborative album is billed as less a “cinematic exegesis” than a “rambling philosophical inquiry,” according to press materials, which isn’t necessarily the most enticing description for a record whose 14 tracks are loosely inspired by a selection of films you may or may not have seen. But A Beginner’s Mind is much more than an incoherent exercise in film commentary disguised as songwriting, and nor does it serve its source material in the same clear-cut way as Stevens’ own soundtrack work for films like The BQE and Call Me By Your Name. Instead, the project is more devoted to the Zen Buddhist concept of shoshin, literally “beginner’s mind,” which prompted the pair to go into each film with an open, empathetic mind and cast out any preconceived notions concerning good and evil.

Musically, A Beginner’s Mind has all the sonic markers of Stevens’ indelible folkier material while also evoking De Augustine’s 2019 record Tomb, a perfect match that makes as much sense on paper as it does on record. It’s also refreshingly lighter turn for Stevens, whose releases in the past couple of years alone include the five-volume instrumental collection Convocations, which was recorded in the wake of the death of his biological father, the ambitious but messy The Ascension, and Aporia, a synth-wave journey made with his stepfather, Lowell Brams. But though A Beginner’s Mind returns to the style that has defined much of his and De Augustine’s discography, the guiding principles that marked its creation also make for a looser and endlessly pleasant listening experience, free from the emotional weight of albums like Carrie & Lowell.

The simplicity of the duo’s approach is almost as essential to the album’s success as its organically collaborative nature: Stevens and De Augustine decamped to a friend’s cabin in upstate New York for a month-long songwriting retreat, where each night they would watch films ranging from All About Eve to Night of the Living Dead to the direct-to-video Bring It On sequel Bring It On Again. The fact that the films served as both a source of comfort and potential inspiration is evident in the album’s endearing, heavenly melodies and poetic but unpretentious lyrics, which can mostly be enjoyed and appreciated outside the confines of narrative thanks to the duo’s effervescent, undeniable chemistry. Opener ‘Reach Out’ is an early highlight that manages to channel the beauty of its source material (Wim Wenders’ Wings of Desire) while creating something all the more transcendent and fragile in its humanity. Even when the reference points are immediately recognizable, like on the tender piano ballad ‘(This Is) The Thing’, the lyrics ruminate on broader philosophical questions (“This is the thing about fiction/ How everything feeds on its paranoia”) without ignoring – and in fact, sharply drawing from – the film’s particular sociocultural resonance.

Though not experimental in the way that some of Stevens’ more ambitious, electronic-focused releases have been, A Beginner’s Mind leaves a lot more room for the kind of playfulness that has been lacking in his recent output. ‘Back to Oz’ is driven by a lively rhythm section that makes it stand out among the album’s serene arrangements, while the cinematic ‘You Give Death a Bad Name’ attempts to deliver some of the underlying political messages of George A. Romero’s work through a cheeky Bon Jovi reference: “Shot to the heart, God bless America/ Failed from the start, what are you waiting for?”

Throughout, you get the sense that none of this would work were it not for the subtlety and earnestness Stevens and De Augustine naturally bring to their performances, their angelic voices weaving into each other to seamless and stunning effect. “I just wanted you to know me/ I just wanted to love myself,” they sing on ‘Cimmerian Shade’, a gorgeous ode to Silence of the Lambs director Jonathan Demme, to whom the album is dedicated. “Beauty resides where your spirit dwells.” What A Beginner’s Mind evokes is less a “rambling philosophical inquiry” than a casual and frequently poignant conversation between two artists escaping into and trying to make sense of other people’s art, briefly allowing their voices to be subsumed by their subjects before emerging with something uniquely their own.

Album Review: Sufjan Stevens & Angelo De Augustine, 'A Beginner's Mind'Sufjan Stevens and Angelo De Augustine’s first collaborative album is billed as less a “cinematic exegesis” than a “rambling philosophical inquiry,” according to press materials, which isn’t necessarily the most enticing description for a record whose 14 tracks are loosely inspired by a selection...