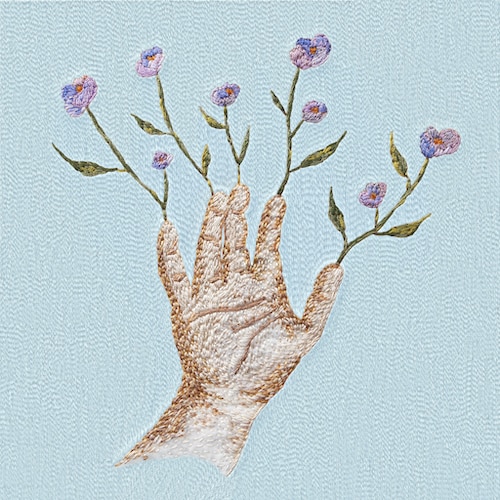 Ohio quartet The Ophelias, composed of vocalist-guitarist Spencer Peppet, drummer Mic Adams, bassist-videographer Jo Shaffer, and violinist Andrea Gutmann Fuentes, made their breakthrough in 2018 with sophomore album Almost. Since then, the friends have welcomed individual growth and important changes – in fact, they now live in different cities – but unity and enthusiastic collaboration have remained a priority. Though in some ways less diverse than its predecessor, the indie rock band’s third album Crocus is an impressively cohesive and emotionally resonant project, a collection of lyrically candid and sonically intricate songs that deftly explores the many faces of heartbreak.

The title track makes for a piercing, complicated introduction to the album, with tender guitar strums welcoming the half-sung, half-spoken recollections of relationship snippets blurring the line between arbitrary and meaningful. The singer wishes their ex a bright future, yet not one free from an enduring nostalgic ache: “I hope that you can’t bear the thought of how my body looked the first time/ And I hope that maybe in your chest you’ll always get a little worked up about it.” The direct yet poetic lyricism that engulfs the entire album also serves as one of its strongest attributes. ‘Neil Young on High’, with floating harmonies delivered by Julien Baker, offers a warmer, more remorseful glance at a once-blooming relationship: “I regret never celebrating smaller victories that we saved/ I would do that part over,” Peppet mourns with a sharp vulnerability. Sting as they might, there’s an underlying thread of liberation carrying the raw confessions of Crocus; an openness that allows itself to unfold when there’s nothing left to lose.

Although the album’s lyrics constantly linger on the darker side, ‘Sacrificial Lamb’ quickly confirms that the band’s project is far from musically homogeneous. Picking up the album’s pace with clean drums and confident guitars, the track makes space for a warranted anger: “I am leaving your party, I’m not having fun anymore,” declares Peppet in a state of disappointment and self-loathing, before diving into the bouncy chorus, “At my best, I’m a sacrificial lamb.” Fuentes’ artfully layered violins, which stand out throughout the LP, add a sense of texture and brightness to the piece. ‘Vapor’, on the other hand, offers initially sparse production mixed with soothing, hypnotising vocals, steadily introducing strings, drums and keyboard that culminate in a hopeful, grandiose atmosphere. Something different altogether arises in ‘Spitting Image’, a country-like tune in which sunny violin and buoyant rhythms merge with an eerie, unnerving lyrical tone: “I was happy with the you in my head/ You cut cold and left me out for dead.” Much like in Almost’s ‘General Electric’, the track’s optimistic energy cloaks dark realities.

Gentle yet ominous “ha ha ha”s embedded in ‘Spitting Image’ are later echoed in ‘Biblical Names’, notably one of multiple songs on the record incorporating religious references. Peppet’s vocals hover atop the heavy, lethargic piano chords, repeatedly delivering the heart-breaking line “I know you loved me more than you said you did” in a dizzying, Mitski-esque fashion. In the second half of the album, the electric guitar, cymbals, and fast, punchy phrases on ‘Becoming a Nun’ following the slower tracks are refreshing and memorable, the quivering strings adding a horror-like dimension to the storytelling.

Crocus is an album that learns to embrace not just the heaviness of a break-up but the process of reflection that it often requires, whatever this may entail: destruction, regret, exhaustion, fondness. While slow and muted at parts, the project is worth a patient listen, not least for its dynamic instrumental arrangements. In their sentimental and at times brutal honesty, the songs stand as proof that no ending is ever one-dimensional, and that its aftermath can be both messy and beautiful.

Album Review: The Ophelias, 'Crocus'Ohio quartet The Ophelias, composed of vocalist-guitarist Spencer Peppet, drummer Mic Adams, bassist-videographer Jo Shaffer, and violinist Andrea Gutmann Fuentes, made their breakthrough in 2018 with sophomore album Almost. Since then, the friends have welcomed individual growth and important changes – in fact, they...