Album Review: illuminati hotties, ‘Let Me Do One More’ 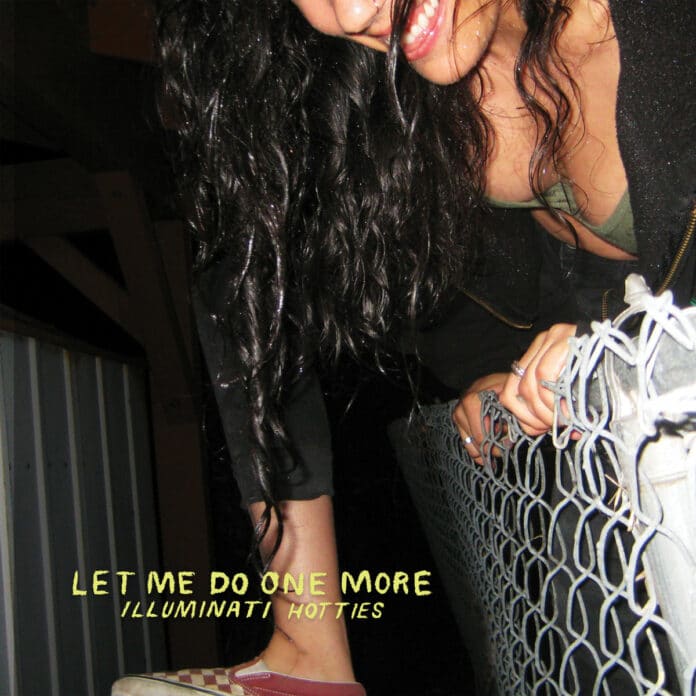 The most revealing and affecting track on illuminati hotties’ new album arrives, unsurprisingly, at the very end. Sarah Tudzin, the studio wizard and mastermind behind the project, has always had knack for sneaking in moments of hushed brilliance in between bursts of irreverent energy and humor, but rather than serving simply as a showcase of her dynamic capabilities, a contrast to everything that came before, the stripped-back ‘Growth’ feels like an acknowledgment of the heaviness that underlies even illuminati hotties’ most driving, hyperactive songs. “I guess being an adult is just being alone,” she sings in a half-whisper, forgetting about her guitar for a moment, the way only the truest revelations come. “I’ll go back to the couch/ Let you stare at your phone/ We’ll pretend this is normal/ We’ll pretend this is growth.” The final guitar notes invoke a familiar lullaby before her voice recontextualizes the album’s title to suggest an uneasy kind of excitement: Let Me Do One More.

Tudzin has never shied away from vulnerability – it’s why the self-coined genre descriptor “tenderpunk” still feels apt – but ‘Growth’ offers a peak behind the curtain in a way that brings the rest of the album to life. One of her attributes as a writer and performer is a keen self-awareness that ensures every biting remark and quiet confession feels like an honest, full-bodied expression of her personality; as an engineer and producer whose credits range from Pom Pom Squad to Macklemore and Weyes Blood, she has the ability to skilfully arrange various moods and sonic textures into a cohesive vision. Her latest LP follows her boisterous 2018 debut Kiss Yr Frenemies and delivers on the promise of her 2020 mixtape, self-released amidst label drama and titled FREE I.H.: This Is Not the One You’ve Been Waiting For. More than any of her previous releases, the way Let Me Do One More integrates several styles under the indie rock umbrella feels both natural and deliberate, resulting in illuminati hotties’ most gratifying effort yet.

You wouldn’t necessarily imagine that to be the case based on the series of singles that preceded it, all of which were outstanding in their own right but hinted at the possibility of an uneven album. The electrifying ‘MMMOOOAAAAAYAYA’ highlighted Tudzin’s versatility as a singer capable of playfully and convincingly sneering her way through lines like “Love me, fight me, choke me, bite me/ The DNC is playing dirty/ Text me, touch me, call me daddy/ I’m so sad I can’t do laundry!,” all while packaging its chaotic absurdity in an insanely catchy song. ‘Pool Hopping’ was perfectly timed as a summer song that was just as infectious if slightly more accessible, but also worked to disguise and rid herself of the pain of going through a breakup. Things took another wild turn with the surf rock-inflected ‘u v v p’, which features a cheekily laid-back spoken word segment from Big Thief’s Buck Meek, while the final pre-release single, ‘Threatening Each Other re: Capitalism’, is a heartfelt love song that becomes a vehicle for her politically charged lyrics.

But considering Tudzin’s gift for bringing out different sides of herself in the span of a single song, it’s no surprise that the rest of the tracks on Let Me Do One More, rather than a ceaseless emotional and creative outpouring, help form a more complete picture. Between ‘MMMOOOAAAAAYAYA” and ‘Threatening Each Other re: Capitalism’, ‘Knead’ presents a brand of alt-rock that falls somewhere between unnerving, soaring, and reliably auspicious, with lyrics about “Pouring my sludge down the sink drain/ Sweepin’ the crumbs of the graceful and grain.” The record’s back half consists entirely of unreleased songs, with ‘Toasting’ returning to food imagery as a conduit to Tudzin’s internal world. It’s not just the brief intro on ‘Joni: LA’s No. 1 Health Goth’ that connects its sneering, riot grrrl-esque attitude with the gentle balladry of previous track ‘Protector’; Tudzin’s songwriting remains incisive and evocative throughout, injected with a sense of vitality that makes every move feel both urgent and sincere.

But you can be earnest in your attempt to hide what’s beneath the surface, or the threat of what’s looming ahead. Whatever anxieties and fears Tudzin has managed to release in these songs, to call them liberating would be to ignore the tragedy that defined her life as she was readying the album: her mother died of cancer on the eve of FREE I.H.’s release. There are ways that Let Me Do One More could be interpreted as a plea to try again, to do it better, to capture or simply be more herself, a means of undermining its own value in light of a more promising future. But it’s that hunger, more than any role she chooses to perform, that’s projected onto the listener and makes the experience all the more riveting. “Takes gumption to be brave and empathic,” she sings on ‘The Sway’, and when she takes stock of just a few of life’s small miracles, you might not even notice.

Album Review: illuminati hotties, 'Let Me Do One More'The most revealing and affecting track on illuminati hotties’ new album arrives, unsurprisingly, at the very end. Sarah Tudzin, the studio wizard and mastermind behind the project, has always had knack for sneaking in moments of hushed brilliance in between bursts of irreverent energy...