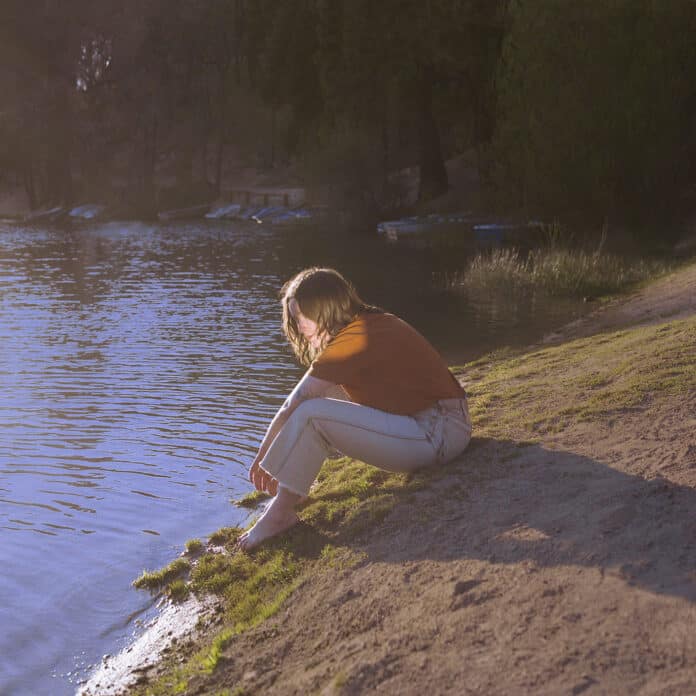 The wistful, lilting harmonies that permeate Boy Scouts’ music might trick you into thinking it exists in some kind of dream state, but oftentimes, what it more closely mirrors is the sun peeking through your window in the morning; the way consciousness creeps up on you, slowly rendering your surroundings in full view. It’s how we encounter Taylor Vick, the Oakland-based songwriter and multi-instrumentalist behind the project, on her latest album, Wayfinder: attempting to situate herself in the not-quite-real world, asking questions, remembering. On ‘Not Today’, warm acoustic guitar wakes her from a dream she’s not ready to let go, repeating the word “dream” as if to actively latch onto it, the place where she’s still grieving the loss of a friend. Soon we find her escaping to the coast to clear her mind, though, she admits, “It isn’t long before I’m thinking again.”

In the midst of lockdown, and despite the challenges it presented, Vick and her longtime collaborator decided to travel to Anacortes, Washington to record a new Boy Scouts album at The Unknown, the converted church studio operated by Nicholas Wilbur and Phil Elverum. It arrives two years after her Anti-/Epitaph debut, Free Company, a gorgeous album chronicling the dissolution of a relationship that was also her most collaborative and polished effort to date. A prolific artist with a decade’s worth of home-recorded material before what qualifies as her first studio outing, Vick has a gift for retaining a rich, mesmerizing quality across her recordings, regardless of where they took shape. Wayfinder ostensibly continues down the path she embarked on Free Company, inviting a dozen collaborators, most prominently Steinbrink and Vick’s brother Travis, to join her without ever disrupting its natural flow. Vick understands the pressures of taking center stage, but does so anyway: “Now that I have the floor/ I want nothing more/ Than to open the door/ That I shut before,” she sings on ‘The Floor’, the rhymes making it sound all too easy.

Some of the additional flourishes that may not have graced Boy Scouts’ earlier work are often what elevate the songs on Wayfinder. Sometimes it’s the instruments that hang in the background: on ‘Charlotte’, a poignant song reflecting on a 50-year romance, the aching tenderness in Vick’s voice is echoed by soft ripples of strings, cymbal, and supple bass. The sound of a mellotron sways through ‘Didn’t I’ as the singer reminisces on pondering existential questions with a friend, underlining the sense of nostalgia before the cello brings it to a dramatic climax. Backing vocals from Vick’s tour mate, Melina Duterte of Jay Som, enliven ‘Big Fan’, a groovy meditation on friendship. On at least one occasion, the record catches you off guard completely, as with the hard rock riff that suddenly bursts through the opener ‘I Get High’, coexisting briefly and semi-harmoniously with the nylon guitar and gentle harmonies that preceded it.

Whether or not that detail works, it’s a potent evocation of the kind of chaos Vick attempts to sift through in her music. As she spends much of the album navigating conversations both imaginary and real, her strength as a songwriter remains its most compelling attribute. Her playful sincerity shines through on ‘Lighter’, in which she cleverly relays an argument where one accuses the other of borrowing their light: “You’d say, ‘Do you even try to remember the good times?’/ And I’d say, ‘Only every night when I’m still without your light’.” The fact that music serves to counter the darkness that’s left behind is evident in both her writing and performances. The admission, on a track called ‘A Lot to Ask’, that “Nothing’s funny in this aftermath” would purely be a somber one if her songs weren’t filled with such a vibrant sense of humour, which highlight ‘That’s Life Honey’ frames as the only antidote to life’s tragedies. By the end, Vick is lucid enough to know she doesn’t have the answers, but is once again lost in thought, wondering if the feeling even got through. “Maybe things are just as they seem,” she muses, followed by a promise we can hold onto: “I’ll see you in the next dream.”

Album Review: Boy Scouts, 'Wayfinder'The wistful, lilting harmonies that permeate Boy Scouts’ music might trick you into thinking it exists in some kind of dream state, but oftentimes, what it more closely mirrors is the sun peeking through your window in the morning; the way consciousness creeps up...