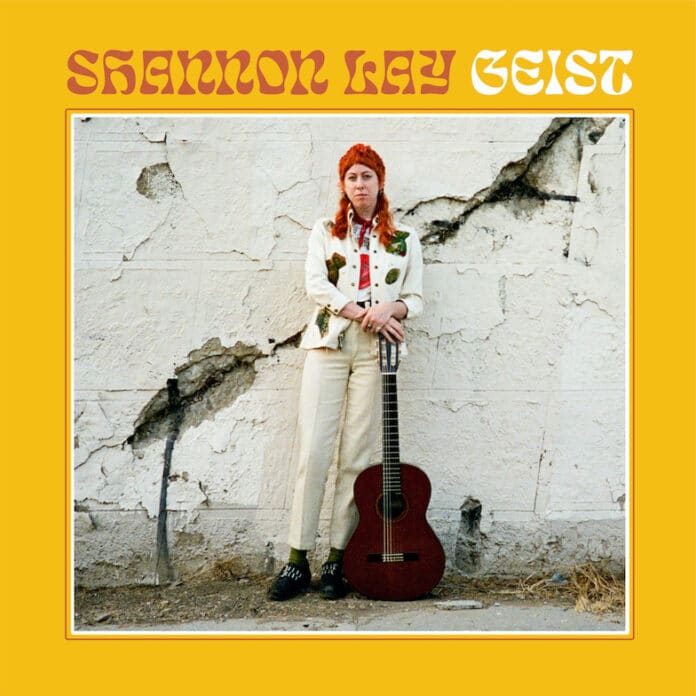 Geist, the new album by Shannon Lay, is named after the German word for spirit, a multifaceted term whose implications can be both philosophical and ghostly. And while the Los Angeles singer-songwriter’s music is reminiscent of the haunted, otherworldly folk of Nick Drake or Vashti Bunyan, it’s not so concerned with the supernatural as the title may imply; it’s also not intended as a meditation on, say, Hegel’s The Phenomenology of Spirit, though Lay does have a gift for shedding light on small yet profound truths in her own unique way. But for a songwriter so attuned to plumbing meaning from the peculiarities of the everyday ­– from her earliest releases to her 2019 Sub Pop debut, August – it’s no surprise she turned towards the self during a time of intense isolation, seeking a vastness within that’s not unlike the one conveyed by the titular word. It also makes for an entrancing, wondrous listen and what might be her most immediately affecting effort yet.

Opener ‘Rare to Wake’ finds the singer roused by the possibilities of the self, longing for a kind of unraveling. But her quest for growth includes others, too: “Something sleeps inside us,” she sings, ensnared by layers of hypnotic vocals that seem to confirm her revelation, before directing a question to whoever’s listening: “Have you always been who you are?” This spirit of self-actualization carries onto the rest of the LP. Mostly a capella, ‘Awake and Allow’ addresses the same themes but invokes them in the form of a hymn; while it alludes to Lay’s Irish roots and her personal ties to California, her embrace of a pure kind of self-discovery reaches toward something universal: “The more I learned the less I knew/ Allow the nature that is you.” Lyrically, it’s among Lay’s finest, most resonant moments, mirroring the stillness that fosters transformation; but the music, as mesmerizing as it can be, never falls into the type of dull comfort that, as she sings, can make you close your eyes to those changes.

Given its endearing, generous tone, it’s only natural that this theme extends beyond the self for the majority of the album. On ‘Thread to Find’, she urges us to follow the internal currents that can only be expressed through nature metaphors: “You see your wild sun move into night/ You feel the unseen hands reach out reach out for you/ They call us to melt away,” she sings, voice swaying as if subject to those same forces, dipping in and out of focus. The feeling of a hand holding you recurs throughout Geist, and on the following track ‘Sure’, it’s there to reassure the singer of the endurance of a love that has the power to eliminate fear. There are other tracks here that read as subtly variations on the same love song, repeating patterns as simple and familiar as forming a smile at the thought of a loved one – but rather than disrupting the flow of the album, they fit so gently that they help move it along.

After all, Lay’s journey is not without companions. After tracking vocals and guitar for the new album at Jarvis Tavinere of Woods’ studio, she sent out the songs to various musicians to help flesh them out, and their contributions exist in such harmony with Lay’s arrangements that they also highlight its central message. Multi-instrumentalist Ben Boye’s synths add a sense of fluidity and ethereality to Lay’s earthy acoustic guitar; Aaron Otheim’s keys accentuate the tenderness of songs like ‘Shores’; Devin Hoff’s standup bass has a stirring quality that embodies much of what Lay is singing about. Ty Segall, with whom she recorded her previous LP, also plays a transportive electric guitar solo on ‘Shores’. But the most dynamically immersive and spectral song on Geist, fittingly, is ‘Untitled’, where Lay’s direful lyricism is accompanied by ominous percussion from Jarvis Taveniere. Sudden bursts of unruly acoustic guitar disturb the song’s quiet but fragile composure as she sings, “The earth run over me.”

Curiously, though, it’s not one of Lay’s own songs but a cover that unites Geist’s shifting energies. Right after ‘Untitled’, she takes on Syd Barrett’s ‘Late Night’, from 1970’s The Madcap Laughs, recontextualizing its dour melancholy simply by including it on her record. Its language of affection isn’t all that different from the one Lay uses throughout Geist, dazzled by the stars yet falling for a deeply human kind of intimacy. When she sings Barrett’s refrain, “Inside me I feel alone and unreal,” it comes into contrast with the earlier affirmation that “You’re on your own but not alone,” not so much disproving it as framing it all as part of the same experience. It goes to show that the desire which animates Geist may not be that complicated, but it is as inexhaustible as it is timeless.

Album Review: Shannon Lay, 'Geist'Geist, the new album by Shannon Lay, is named after the German word for spirit, a multifaceted term whose implications can be both philosophical and ghostly. And while the Los Angeles singer-songwriter’s music is reminiscent of the haunted, otherworldly folk of Nick Drake or...