Elvis Costello has announced a new album with his band the Imposters, The Boy Named If. It’s set for release on January 14, 2022 (via EMI/Capitol), and the new single ‘Magnificent Hurt’ is out today. Check it out below and scroll down for the LP’s cover art and tracklist.

”The full title of this record is ‘The Boy Named If (And Other Children’s Stories)’,” Costello said in a press release. “‘IF,’ is a nickname for your imaginary friend; your secret self, the one who knows everything you deny, the one you blame for the shattered crockery and the hearts you break, even your own. You can hear more about this ‘Boy’ in a song of the same name.”

Co-produced with Sebastian Krys, the album is a collection of songs that “take us from the last days of a bewildered boyhood to that mortifying moment when you are told to stop acting like a child – which for most men (and perhaps a few gals too) can be any time in the next fifty years,” Costello added.

The Boy Named If Cover Artwork: 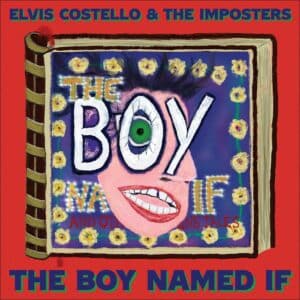 The Boy Named If Tracklist:

1. Farewell, OK
2. The Boy Named If
3. Penelope Halfpenny
4. The Difference
5. What If I Can’t Give You Anything But Love?
6. Paint The Red Rose Blue
7. Mistook Me For A Friend
8. My Most Beautiful Mistake
9. Magnificent Hurt
10. The Man You Love To Hate
11. The Death Of Magic Thinking
12. Trick Out The Truth
13. Mr. Crescent