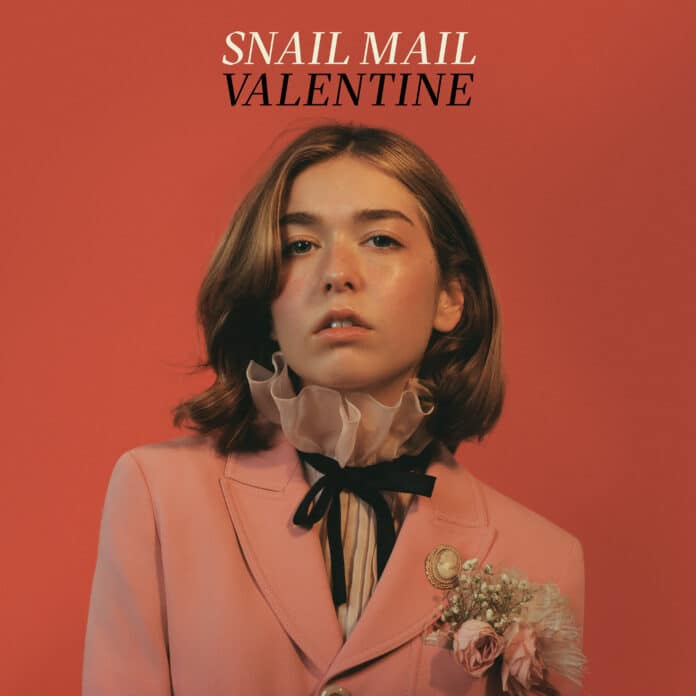 It’s hard to keep up a graceful appearance when the world seems to be slipping through your fingers. For musicians, leveling up your sound can provide an easy solution: it’s a move that’s going to be expected and likely respected, a refinement that can mask whatever turmoil is lurking underneath. But a successful sophomore effort usually requires a finer balance; retaining the urgency and intimacy that often marks an artist’s early material while expanding on their promise, and Snail Mail certainly does this on her second album, Valentine. At this point, however, the 22-year-old Lindsey Jordan is as familiar with the trappings of fame as she is with the musical templates of indie rock, and her relationship with both seems to be as volatile as the romantic attachments she documents in her music. Even if she wrote much of the album in the same bedroom where she penned her earliest songs and is still burdened by the same unrequited yearning, her perspective has evidently changed.

Following her blistering 2018 debut Lush and created “on the heels of life-altering success, a painful breakup, and 6 weeks in treatment,” every choice on Valentine represents a commitment, more than anything, to reflect that complicated feeling: of knowing you have to move on but standing with one foot in the past and the other in the future, of being torn between reality and fantasy, of craving stability but finding yourself falling back in limbo. Because whatever previously coloured your outlook on life and love – some potent combination of idealism and nostalgia that ended up harbouring a whole lot of toxicity – has been abandoned without something there yet to sufficiently replace it. Percolating in that space, Valentine becomes an album about the growth that happens when you just want to lie down and collect your breath, without even realizing it.

But first, Jordan lets out a storm: “So why’d you want to erase me/ Darling valentine?” she howls on the chorus of the opening title track, her voice seething with a desperation matched only by the explosive instrumentation around her. After this sudden jolt of catharsis, the album eases into moodier, groovier, yet consistently compelling territory, engaging your attention even with the tacit acknowledgment that nothing that follows can possibly come close – much like the memory of the subjects Jordan clings to throughout the album, a feeling once compact spreads out into a dozen imagined shapes. But it’s still impossible to ignore, much less contain; some version of all-consuming devotion reverberates through nearly every song on Valentine, and with help from co-producer Brad Cook (Waxahatchee, Indigo De Souza), each variation is rendered in vivid detail. The steady, infectious groove and ironic detachment of ‘Ben Franklin’ is undercut by a stinging awareness of heartache; the ghostly backing vocals that haunt the dreamy backdrop of ‘Headlock’ seem to follow directly from a brush with death.

In embodying the singer’s fixations, the album might be less stylistically defined than Snail Mail’s debut, but it feels all the more honest and powerful as a result. “I wanna wake up early everyday/ Just to be awake in the same world as you,” she sings on the acoustic cut ‘Light Blue’, a sweet proclamation that somehow isn’t darkened by everything that surrounds it. But its placement next to ‘Headlock’ does reveal the slippage of time, the way absence can have you reaching for that same feeling in impossible places: “Another world where we’re together/ Are you lost in it too?” Valentine asserts that being left behind sucks, but not as much as being the one who has to leave things behind; and as much as it moves towards acceptance, Jordan finds ways to briefly swim above it. With its interpolation of a 1979 song by Madleen Kane, ‘Forever (Sailing)’ mirrors the singer’s fading sense of self, fulfilling the desire behind her question: “Doesn’t obsession just become me?” Yet the pain is too pronounced to disregard: “So much destruction/ Look at what we did/ That was so real/ And you don’t just forget.”

Valentine resonates because it is direct without compromising on the blurry dynamics of the circumstances it revolves around. Even when tempted to build layers around a façade, her intense self-awareness grounds everything in an unresolved yet dazzling reality. Jordan’s voice exudes a newfound confidence and clarity that’s obvious in the R&B-inflected ‘Madonna’ or the enrapturing ‘Automate’ but slips into even the quietest, most unassuming corners of the album, like the stripped-back ‘c. et al.’, working towards vulnerability rather than against it. When the time comes for the string-backed finale of ‘Mia’, Jordan paints the scene of the morning after a breakup with such devastating weight it’s hard to believe she’s been tracing it this whole time, that we’re back to square one. Because when she assures her lover she’s older now on ‘Valentine’, the loudness sends a mixed message; but with ‘Mia’, the suggestion feels closer to the truth, itself inescapable. “I love you forever,” she sings over strings that flutter like flowers in the wind. “But I’ve gotta grow up now.”