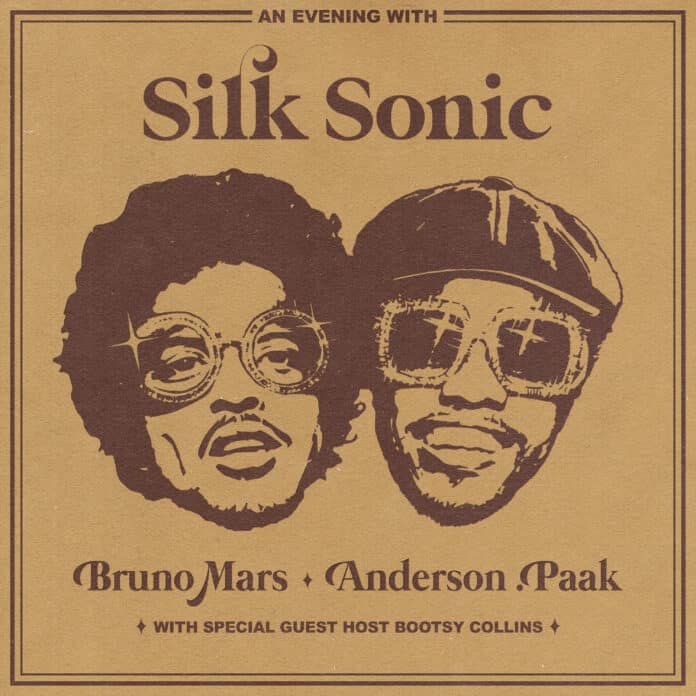 What do you get when you combine the retro-pop genius of Bruno Mars with the neo-soul, rap and R&B of Anderson .Paak? The question might never have been considered until the two artists teamed up to become Silk Sonic – and the answer, in the form of their debut album An Evening With Silk Sonic, is full-blown 70s revival.

Granted, this isn’t an unexpected move from Mars, whose previous release, 2016’s 24K Magic, is an acrobatics display of reverse-engineered 90s R&B. .Paak’s projects, however, are more firmly grounded in the 21st century, meaning that what emerges from the two halves of Silk Sonic is far more than the sum of its parts. An Evening With Silk Sonic is a commitment to pastiche, blending disco and R&B with 70s funk and 60s soul. At the core of this album is a kind of opulent nostalgia, veering very deliberately into cheesiness, but always with the aim of helping listeners to revel in the music rather than turn away from it. What Mars and .Paak have created, then, is an exercise in indulgence.

This becomes clear from the opening track, as acapella harmonies and kick drum thrusts give way to a sweeping brass section while synthesizers and strings jostle for attention. Renowned bassist Bootsy Collins introduces himself here as “blaster of the universe” and reappears throughout the record to offer morsels of wisdom; his very position as the album’s ‘host’ grants Silk Sonic’s entire project instant validation.

The artists, however, don’t appear to require any reassurance. ‘Leave the Door Open’, the first single, is a tribute to soul, complete with rippling keys, an ambling beat, and playful flickers of glockenspiel that hover behind Mars’ exquisite, billowing falsetto. It is to his credit that he can carry the earnestness of lines such as “Every word that I say is coming straight from the heart” into those affirming, “If you’re hungry, girl I got filets.” Such is the power of confident vocal delivery, and .Paak follows suit amid a skidding beat in ‘Fly As Me’ as he immortalises his superstar status. “Don’t need a spatula, everything catered, extra flavor,” he gleefully half-raps. “Go ahead, sprinkle some truffle on your mashed potatoes.” This is comedy refined by charisma; these absurd declarations land because Mars and .Paak make you want them to. As the call-and-response bridge of this track suggests, An Evening With Silk Sonic is a record that compels its listeners to devote themselves entirely to the world of funk and sentimentality that it so painstakingly produces. And if this succeeds, everything – including some ridiculous writing – begins to feel effortless.

Though the pace slows in ‘After Last Night’, the nostalgia only intensifies. Mingling harmonies as well as sumptuous bass, courtesy of Thundercat, create an old-school disco feel. After Collins drops in to accentuate the steaminess of the track (“Normally I don’t stutter, but you d-d-d-d-do it to me,” he confesses) it finds intensity in the bridge with grittier guitar riffs and some spectacular ad libs. What might seem sickly, then, is impressively crafted. ‘Smokin Out the Window’ trades devotion for bitterness, stealing in with a smattering of ominous strings before funk is reinstated by a slick beat and ever-seductive bass. The lyrics may be yet more laughable (“Must’ve spent thirty-five, forty-five thousand up in Tiffany’s,” Mars begins, while .Paak simply wails, “Oh, no!”) but the track demands surrender to its infectious energy.

The rest of the record extends this glorious offer of escape. ‘Put on a Smile’ chronicles heartache by channeling 70s R&B, with frantic drums dispersing into melancholy keys and airy strings that foreground a particularly brilliant vocal performance from Mars. ‘777’, meanwhile, sees the pair’s hedonistic tendencies provide another dose of inspiration: buzzing guitar crumples into sounds reminiscent of an ascending aircraft as .Paak proclaims, “Moonwalk to the money like I’m Mike Jack,” before beckoning an exuberant brass section. There is no shortage of luxury here.

Even in between ostentatious descriptions of gambling and champagne, the record’s extravagance remains. The swirling strings of ‘Skate’ and dreamy, soaring key changes across the final track, ‘Blast Off’, only further a sense of whimsical recollection. “Wе’re up so high, we’d be fools to look down,” Mars professes, but as the album closes, this very realisation cues a descent back to Earth – and back to the present. Perhaps Silk Sonic’s retro utopia was never destined for permanence, but it certainly makes a lasting impression.