The Best Football Movies Of All Time 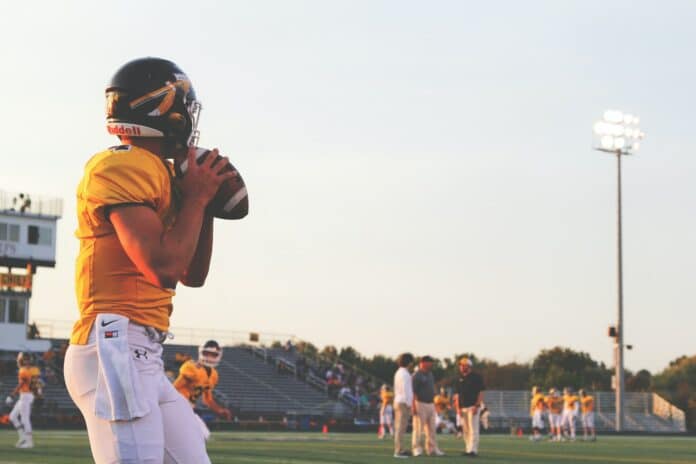 Baseball might be America’s favorite pastime, but there is nothing more unique and exciting than football. Think about this, we cheer for men in tights and giant pads crashing into each other and stuff our mouths with snacks and beer. Taking American’s love for football into consideration, Hollywood has made many films about the sport.

You have Adam Sandler, zany comedies, a la The Waterboy. But on the other, there are football dramas that will make you cry and laugh, such as Friday Night Lights. From being crowd-pleasing to empowering, these films will have you jump out of your seat and cheer for the leads. So, if you are looking to enjoy some football movies, here are the best football movies that were ever made.

A great football movie, Rudy talks about a young man who has always been told that he was too small to play college football. However, he remains determined to overcome the odds and realize his dreams of playing for Notre Dame.

If you are looking for some inspiration, this sports movie will keep you enthralled. It will show you the value of hard work and commitment. There are only a few football movies that will make you feel accomplished with very little playing time. However, that is the beauty of this sports film. The way Rudy uses a great sports program to achieve his dream shows us how passion can lead to great things.

Rudy isn’t as flashy as other movies on the list. However, it is a true story that is inspirational, realistic, and a testimony to the power of tenacity. In addition, it features some great acting, excellent gameplay, and some memorable score.

Friday Night Lights is based on H.G. Bissinger’s book, which portrays the economically miserable town of Odessa, Texas, and their favorite high school football team, The Permian High Panthers.

The movie puts forward a reasonably authentic look at west Texas football and how the sports affect not just the players but also their families and the community members. It can be pretty overwhelming for a child to carry the weight of their town on their shoulders while figuring out who they are as a person. While the movie doesn’t necessarily make you feel bad for the children or pity them, it focuses on suitable topics.

In our opinion, Friday Night Lights is a pretty excellent football film that presents the Texas high school football culture in a straightforward manner without excess glamour. It is also great on-field gameplay and features excellent storytelling.

A movie set during the NFL draft, Draft Day narrates the story of GM Sonny Weaver. He is given a chance to rebuild his team when he trades for the number one pick. He is tasked with choosing between what he can sacrifice on a life-changing day for a handful of young men with NFL dreams.

An exciting football movie, Draft Day is almost entirely about the behind-the-scenes of the NFL draft and portrays the events that happen in a single day. The movie leverages a built-in ticking clock which is something that a lot of films don’t take advantage of. This helps make it all the more exciting and worthy as a football movie.

If you love professional football, this happens to be a perfect option to learn more about how the teams operate behind the scenes. In case you are into betting, you might also want to check out the NFL odds for the 2022 Super Bowl.

When the members of the Marshall University football team and some of its fan dies in a tragic plane crash, the team’s new coach try to keep the football program alive with the surviving players.

We Are Marshall is an intense football movie that sheds light on the entire team and the spirit of a whole school instead of a single athlete. This is, in fact, the factor that makes this movie unique. In addition, it teaches you some essential lessons on taking a step back and rebuilding your empire when it seems like nothing is working out.

We Are Marshall does an exceptional job in inspiring the viewer and communicating a confirming message about carrying on with your life after a tragedy. There is also some great gameplay on display.

To put it short, The Express is an excellent football movie that demonstrates how sports can be an environment that promotes social progress. The film shows that though it wasn’t an easy road, but it was one worth fighting.

Do you know which of your favorite celebrities love playing Bingo?

How to Shop Fashion Sustainably and Affordably

The Best Movies for Students Not About Studying

Expanding Your Reading Selection is Easier Than You Think