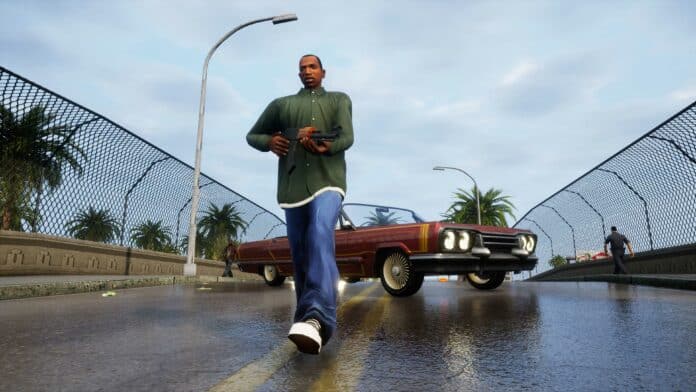 However, upon its release, many noticed many flaws within a game, from bad character redesigns to rain that looks badly overlayed with minimal editing and thought for the player.

The most annoying aspect of the remaster is probably the horrible choice of rain that Rockstar developed to make it appear more “realistic” and high-definition. Because of its dreadful and robust appearance, it looked like a university student made it during a weekend project. Unfortunately, this lousy choice appears to have passed Rockstar’s game testers and anyone with a sense of quality and taste.

Rockstar decided to include the fun first-person camera view for players in the new remaster. This feature became more prominent in the GTA series with GTA V, commercially the most successful game in the franchise. However, it did not work out so well; the first person camera seemed to have tons of bugs that made it unplayable. Hopefully, Rockstar will fix this as soon as possible.

Another bug within a game is prominent in GTA Vice City. This bug happens when players use Tommy to ride a motorbike and are about to try a wheelie. While it seems minor, the bug does make for some hilarious gameplay. This bug asks the question, how much money and time did Rockstar put into this remaster?

Glassy Games released a video that showcased a significant bug within GTA 3 remaster version. Whilst some glitches seem minor, this one seems to break the game’s enjoyment. The glitch is game-killing but straightforward, as it stops the player from moving forward due to a blank wall or a transparent object.

Lastly, to finalise the last small list of bugs in the new GTA release, we have this hilarious glitch that appears throughout the three games where a player gets stuck within an object or scenery. Whilst this type of thing happens throughout many video games; you’d expect Rockstar to do a little better when GTA 6 seems to be decades away.

5 Reasons Clash of Clans Remains Such a Popular Game