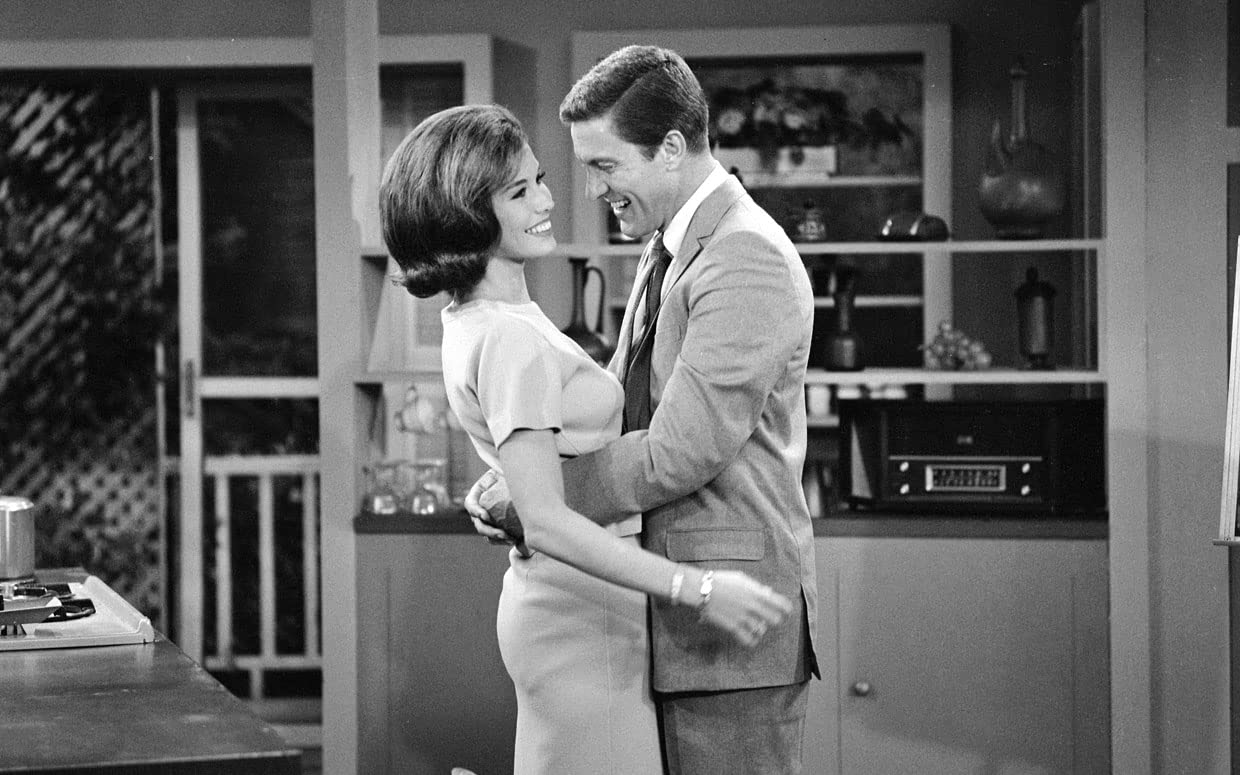 I became interested in The Dick Van Dyke Show when it had recently ended its prime-time run and was just beginning a second life in reruns. I was much too young to ascertain the difference between prime time and reruns, erroneously assuming that the show was filmed on a daily basis.

Shortly after I began my faithful viewing, my European-born father—who paid scant attention to the American vernacular—passed by the TV and, uncharacteristically, paused to watch. And then he did something even more uncharacteristic: He laughed out loud. There is almost something of biblical solemnity to this: And my father laughed. But laugh he did. It must have unconsciously registered that he was bestowing the imprimatur of critical respectability that would never be attached to Lost in Space or Lassie. The character of Buddy Sorrell, in addition, bore some facial expressions that matched my father’s. There was also Rob and Laura’s tendency to discuss things, a conversational back-and-forth, which loosely reminded me of my parents and their own way of conversing.

By the time I was an adolescent I came to possess the extremely dubious expertise of turning my back to the television screen when the show aired and—by dint of sound alone—being able to identify that specific episode.

The Dick Van Dyke Show is studded with dialogue and plot developments that I distinctly remember watching at the time and not comprehending. There is an episode in which the tyrannical Alan Brady is heavily tranquilized that completely mystified me. In another episode, Rob unwittingly winds up at a craps game; one of the motley gang is facing deportation, something I’d never heard of. There are also snatches that I remember as being riotously funny and are now, decades later, only slightly amusing. It is akin to going back to old issues of Mad magazine—another passionate interest that developed around the same time—and noticing how much I understood, how much I didn’t.

Television, in that pre-internet age, could be a communal experience in a way that today doesn’t exist.  A particularly memorable episode of a show or movie would be avidly discussed the next day at school. At a certain hour, millions of people would be simultaneously tuned to Johnny Carson.

Paradoxically, the medium could also fulfill a private, almost intimate slot. There was  the solitary ephemera of television-watching: the obscure movie that would suddenly pop up, a random show. (There are things I watched as a kid—which I remember quite well–that I still cannot identify all these decades later.)

The Dick Van Dyke Show, for me, slanted toward the realm of private watching. The show was no longer current and, as far as I knew, was ignored by my age cohort. It certainly didn’t merit discussion among my friends and classmates. Because I began watching at a young age and with such enthusiasm, it was, as irrational as it sounds, easy to think of the show as my own domain. It was such a part of my childhood that years later, when I finally realized that The Dick Van Dyke Show really and truly was an enshrined part of television history, I felt irrationally chagrined. This essay, in fact, presupposes a general familiarity with Rob and Laura, Buddy and Sally, Alan Brady.

Intellectually, of course, those feelings of chagrin made no sense. But only intellectually.

As obvious as it sounds, the show has endured because it is viscerally, often brilliantly, funny. The principals are all odd in their own way; the dialogue is consistently literate. The Dick Van Dyke Show, to an unusual degree, abounds with idiosyncratic, oddball ancillary characters. (Frank Adamo, Dick Van Dyke’s real-life assistant, appears—à la Alfred Hitchcock– in a myriad of walk-on roles.)

For all its emphatic focus on suburbia—Rob and Laura are, after all, unambiguously entrenched in New Rochelle—the show is surprisingly inflected with that wisecracking, pugnacious, bagel-with-a-schmear New York City. And at the risk of inciting the wrath of anti-Semitic conspiracists, the show’s nooks and crannies bubble up with Jewish rhythms. There is the famous (and genuinely moving) episode in which Buddy receives an adult bar mitzvah, but the series as a whole is undergirded by Jewish characters. Buddy, in the midst of an inane prank phone call, makes a nonsensical reference to the “shah of zol zein”—zol zein shah, he concludes, Yiddish for “be quiet,” which he tosses off without translation. My mother had to explain this to me. One wonders who out there in television land would have understood that.

The Jewish aspects of the show were familiar enough to me as not to merit notice—the opposite of not understanding what it meant to, say, deport someone, but basically yielding the same result.  My family spoke Yiddish; I underwent an Orthodox bar mitzvah. It didn’t seem notable that Buddy would appear in a synagogue, wearing a tallis. It escaped my attention that the proprietor of the office lunch cart who pesters the Alan Brady staff would speak with a noticeable Jewish intonation. It’s the idea that your quotidian is the world’s quotidian—a childhood misapprehension that one should grow out of. (Should being the operative word.)

The caveats? Larry Matthews, as the sporadically appearing son, Richie— left, it seems, to his own devices most of the time—is in the running for television’s least-convincing child actor. The show’s song-and-dance numbers are embarrassingly corny. Mary Tyler Moore, in earlier episodes, is wooden. As expansive as the character of Laura is, she and the show are still lashed to the era’s prevailing sexist tropes.

For all of The Dick Van Dyke Show’s iconic status, critical glosses are few and far between, mostly coming from the peerless writer-critic David Marc. It is Marc’s accurate postulation that one of the show’s subtextual constants is the battle between (supposed) high and low culture. Rob, TV comedy writer that he is comes up against the highfalutin gatekeepers of highbrow culture who turn up their noses at the déclassé medium of television. Rob himself internalizes some of these attitudes by sporadic endeavors to be a “real” writer and write a “real” book.

He experiences a different sort of disparagement—but equally virulent–from the bohemian Greenwich Village set, rendered in very broad strokes as kooky, pretentious hucksters. Rob gets it from all sides.

For all my long-standing interest in Dick Van Dyke—the italicized title of a show–my curiosity about Dick Van Dyke—the non-italicized, flesh-and-blood person–has always been minimal. With some degree of sheepishness, I did read his memoir, My Lucky Life In and Out of Show Business, which is surprisingly compelling and reveals an activist political streak.

But it is the show that is, for me, an enduring touchstone: A moveable feast metaphorically redolent of suburban fondue pots, pastrami on rye, and my mother’s oatmeal cookies.