Ex-Vöid, the band formed by Joanna Gruesome singers Lan McArdle and Owen Williams, have announced their debut album. Bigger Than Ever arrives March 25 via Don Giovanni. Today’s announcement comes with the release of the new single ‘Churchyard’, which you can check out below.

“I wrote it when I was like 24 and living in Brighton,” Williams said of ‘Churchyard’ in a statement. “My friend and I were unemployed and we used to spend a lot of time drinking cans of lager and taking legal highs in a pet graveyard. It was boring so at the end we sing: ’I get so bored’ over and over etc.”

Bigger Than Ever will follow two EPs, 2018’s Ex-Vöid and 2019’s Only One. Along with McArdle and Williams, Ex-Vöid features Laurie Foster on bass and Jonny Coddington on drums.

Bigger Than Ever Cover Artwork: 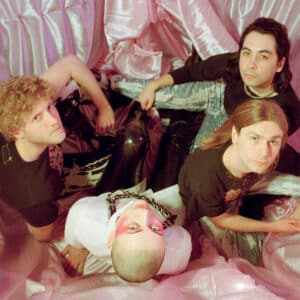 Bigger Than Ever Tracklist: