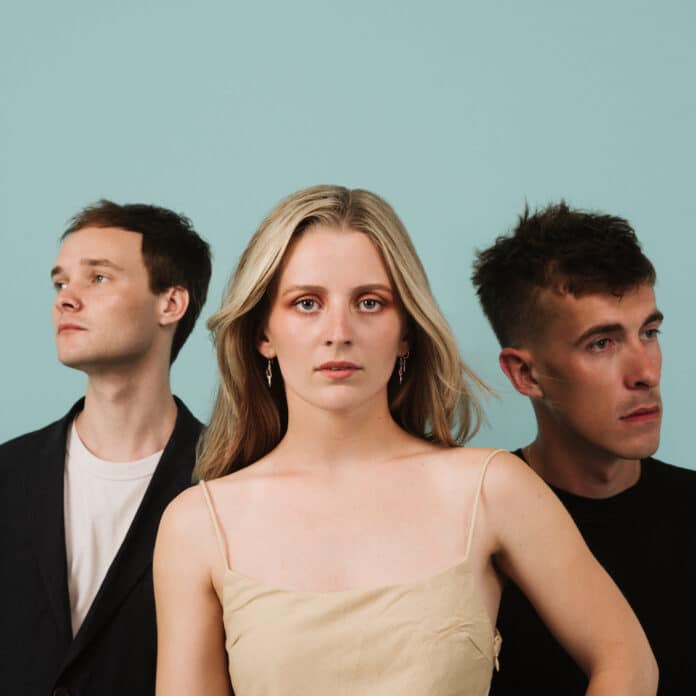 Thyla specialize in soaring, larger-than-life choruses, but some of their stormiest melodies stem from a place of anxiety – a festering feeling of insignificance. “I tend to write a lot from insecurity, because I’m always scared that it’s not going to be good enough, because it’s all self-taught and a bit untamed,” frontwoman Millie Duthie said in an interview with Stereogum back in 2018, when the Brighton trio were still considering the prospect of releasing their first EP. With their debut album now out into the world, it’s obvious that the band’s steady evolution has not been about pushing that quality out of the music, but rather mining the constant turmoil to keep it as dynamic and engaging as their blend of dream pop, post-punk, and alt-rock. Any young band could confidently churn out songs armed with the kind of questions that bookend Thyla’s self-titled LP – “Don’t you need real friends?” and “Who am I?”, the latter of which also appears about halfway through – but few could make it sound so desperate and defiant at the same time, let alone consistently anthemic.

Ever since Thyla burst into the scene with a series of singles including ‘Pristine Dream’, ‘Ferris Wheels’, and ‘I Was Biting’, they kept building momentum by being the kind of band whose latest single was almost always favourably compared to their previous material. Each offering was catchier and more hard-hitting than the last, and that upward trajectory continued across their first two EPs, 2019’s What’s on Your Mind and 2020’s Everything at Once. Although that kind of buzz can put pressure on any rising act, Thyla seem less interested in the looming question of what direction they should go in next than – you guessed it – who they are in the first place. When asked about their apparent shift towards a more pop-leaning sound around their second EP, Duthie told Our Culture they see it “more as an expression of that side of us.” It’s this self-reflective approach to songwriting that makes Thyla brim with personality even as its sonic touchpoints are easily identifiable; they treat it less as an opportunity to collect some individually great tracks than a space to explore that question more closely.

Still, many of the album’s songs would have no problem standing out on their own; even the one presented as an interlude has a unique air, its wispy mood unfolding over two full minutes. ‘3’ is a prime example of how masterfully Thyla can create tension and then release it in a grand explosion that might be expected but feels no less sudden for how uproarious it is. Though they hint at the inner conflict that burbles underneath, you can never really tell if those choruses here are meant to be cathartic, mournful or unhinged (at their best, they’re all of the above), and that emotional ambiguity makes listening to the album most interesting without a lyric sheet in front of you. But the force of Duthie’s voice, playing off against bassist Dan Hole and drummer Danny Southwell’s propulsive yet equally volatile rhythm section, ensures the intensity of the experience always comes through, like on the outwardly euphoric ‘Making My Way Through the Skyline’. On a track like ‘Amber Waits’, when the guitars grow to be less aqueous than tidal, they all struggle to rise above a mix that’s surprisingly chaotic for how pristine the band’s aesthetic can often seem.

But Thyla have a way of utilizing pop melodies to drive a song closer to its emotional source rather than as a means of externalizing it. ‘Gum’, a track seemingly about the frustrations of growing up, erupts through its dancy groove, while the CHVRCHES-esque ‘Breathe’, about finding yourself in the wake of a relationship, shimmers with a quiet confidence. Although Thyla stay more or less in a familiar lane throughout the record, they offer a few surprises along the way, even if some of the quirkier experiments, like the vocal processing on ‘Dandelion’, don’t really pay off. And while closer ‘Rabbit Hole’ doesn’t answer any of the album’s burning questions, it captures them in the titular metaphor that the band is more than capable of evoking. They keep running and soaring, searching not for a way out but a deeper look within.

Album Review: Thyla, 'Thyla'Thyla specialize in soaring, larger-than-life choruses, but some of their stormiest melodies stem from a place of anxiety – a festering feeling of insignificance. “I tend to write a lot from insecurity, because I’m always scared that it’s not going to be good enough,...