Sound on Sound, a new festival from the organizers of Governors Ball, has announced its inaugural lineup. Taking place September 24 – 25 on the bank of the Long Island Sound at Seaside Park in Bridgeport, Connecticut, the festival will feature Dave Matthews and Tim Reynolds, the Lumineers, Stevie Nicks, Brandi Carlile, and the National, with Father John Misty, Ziggy Marley, Gary Clark Jr., Black Pumas, The Head and the Heart, Band of Horses, Spin Doctors, Jenny Lewis, Geese, and more also set to perform across two stages. Tickets go on sale on February 18 at 12:00 pm EST here. Check out the full lineup below. 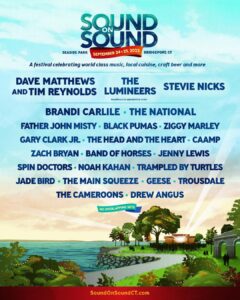