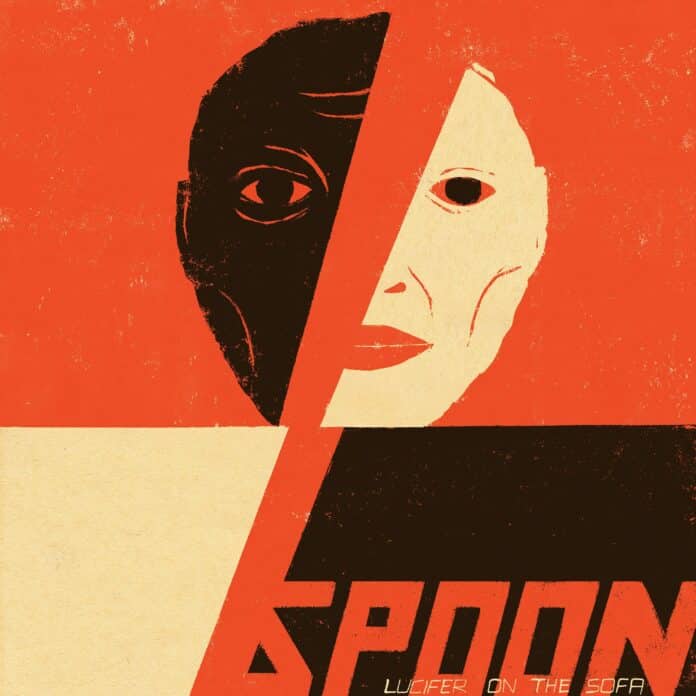 Few bands are able to maintain a reputation for being both consistent and consistently great – one is the highest form of praise, the other a curse disguised as a compliment – and you’d wonder how Spoon have kept at it for so long. Maybe it’s the fact that they’ve developed a sound that’s distinctive enough for it to make sense when critics twist the band’s name in all sorts of peculiar ways (the cover of Smog’s ‘Held’ that opens their new record? “Spoonified”), or that they’ve spent the last 20 years refining their formula so that it doesn’t become an easy means of discrediting them. But what’s always refreshing about their approach is that it can be at once messy, measured, and meticulous without losing its character, so that it doesn’t really matter if their latest effort could be classified as an artistic left turn or a straightforward rock n’ roll affair. As long as it sounds like Spoon, there will be something fresh and compelling about it.

That said, Lucifer on the Sofa would sound like a complete shift in style even if it hadn’t been five years since the release of its predecessor, the somewhat divisive Hot Thoughts. After experimenting with electronic textures and artfully drawn-out song structures, Spoon wanted to make something more immediate while retaining some of the added freedom that record allowed for. They returned to a method that would help the songs evolve with precision and focus: touring behind Hot Thoughts made them realize they preferred the live versions of the tracks that appeared on the album, so they set out to capture the energy of the band playing together in a room, rehearsing until the song reached its ideal form. The result feels equal parts urgent and relaxed, with just the right amount of eeriness that’s hinted at by the album title. Song titles like ‘Wild’ and ‘My Babe’ point to the record’s back-to-basics approach, too, but the strength of its ragged guitar riffs and sleek grooves is enough to keep up the tension – especially when paired with atmospheric flourishes and welcome surprises like the studio chatter that kicks off the album.

Of course, it doesn’t hurt that Lucifer on the Sofa houses some of Spoon’s sharpest, most memorable material. Lead single ‘The Hardest Cut’ references the stylings of ZZ Top to encapsulate the album’s gritty, swaggering aesthetic, which frontman Britt Daniel has described as “the sound of classic rock as written by a guy who never did get Eric Clapton.” The rest of the singles are also some of its strongest offerings: ‘Wild’ was co-written by Jack Antonoff, who is likely responsible for elevating its chorus into one of the band’s loudest and most euphoric to date, full of hunger to explore the world around him. Treasuring new and familiar comforts is a fitting theme for Spoon, one whose resonance is amplified by the simple earnestness of songs like ‘My Babe’ and ‘On the Radio’; you don’t really need to read much into it to get what kind of love songs those are. Daniel’s lyrics may be vaguely reflective, but there’s enough genuine passion in his delivery to really sell it.

Thankfully, Spoon don’t coast on the same mood for the entirety of the album. There are sparer, more meditative moments that evoke the loneliness that pervaded the early days of the pandemic, when some of the songs here took shape. ‘Astral Jacket’ is a lovely highlight, its languid intimacy accentuated by the subtlety of the production. But the nervousness that might have seeped through otherwise nondescript tracks like ‘Feels Alright’ appears to have been smoothed over, and some of the quieter moments don’t fully embrace the kind of vulnerability that would allow for greater emotional investment. The somber title track is undeniably one of the most beautiful and poignant songs on the record, but it would hit harder as a closer had we spent more time getting to know who the titular villain really is. Still, the tone is suggestive: “What are you gonna do with your last cigarettes? All your old records, your old cassettes?” Daniel asks, as if addressing some part of himself he’s trying to leave behind. Lucifer on the Sofa recognizes that moving forward isn’t always about trying new things; sometimes, it’s about finding the best, most joyful ways to simply move them around.

Album Review: Spoon, 'Lucifer on the Sofa'Few bands are able to maintain a reputation for being both consistent and consistently great – one is the highest form of praise, the other a curse disguised as a compliment – and you’d wonder how Spoon have kept at it for so long....