Irish artist Sinead O’Brien has announced her debut album. It’s called Time Bend and Break the Bower, and it’s set for release on June 10 via Chess Club Records. It includes the 2021 singles ‘Girlkind’ and ‘Kid Stuff’, the latter of which landed on our Best New Songs segment, as well as the new single ‘Holy Country’. Check it out below, alongside a video directed by Chloé le Drezen.

The 11-track LP was produced by Dan Carey and recorded in his south London studio Mr Dan’s. Talking about the record, O’Brien said:

The story of the album is built up in layers; one song giving context to the next. I thought about becoming undressed; testing my ideas, my voice. Working myself out across themes of identity, curiosity, creative process. Experimenting with the form and shape of language, using tone and delivery to get to the immediate centre of what I am saying. The record opens and closes with poems, these tracks have a really clear direction – a form which is set apart from the ‘songs’. I hold stops in different places, moving emphatically through the lyrics, changing the meaning. No punctuation – only the voice mapping out the way.”

“The album title “Time Bend and Break The Bower”, from the song ‘Multitudes’, came into my head and made its demands, an idea that pressed on me throughout the record. It has a very active role. The clock symbol is enlarged, it looms like a moon over my activity watching, counting me down to zero. Dripping with self-sabotage and the feeling of being chased; it pulls and pushes against the verses which talk of ’Multitudes’; the things that faithfully come back – the images, the words, creativity. It is creativity itself. 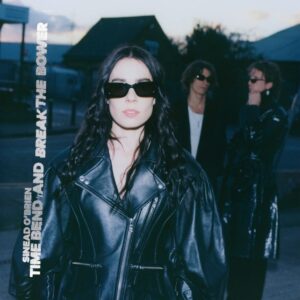