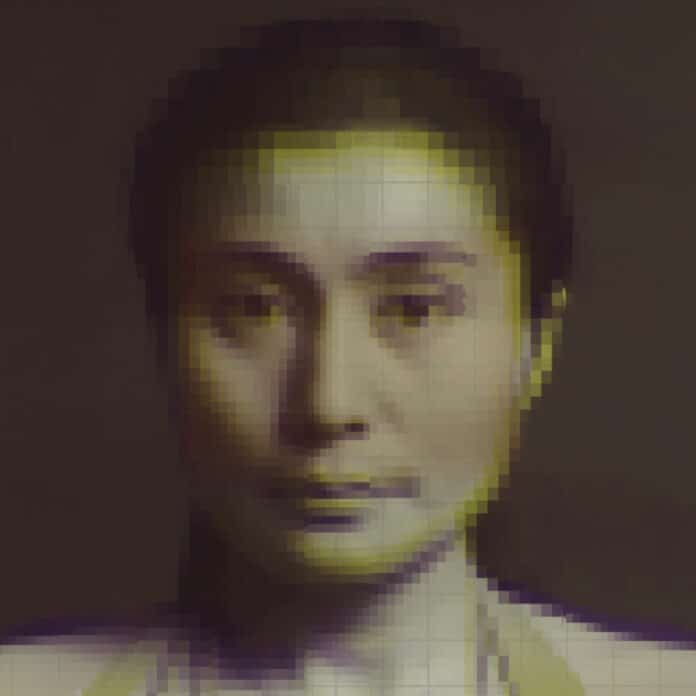 On the cover of Ocean Child: Songs of Yoko Ono, the titular artist’s face appears in a pixelated portrait. She’s instantly recognizable, yet the details of her visage remain obscure. This cover artwork encapsulates Ono’s legacy: a figure deeply entrenched in the history of rock music, yet with a tragically underexplored body of work. Ono’s music career, often overshadowed by her relationship with John Lennon, is rich and varied, including explosive avant-garde experiments (e.g. her Plastic Ono Band record, released alongside Lennon’s sister album of the same name) to experimental rock epics (e.g. Fly, a soundtrack to her film of the same name) to piano pop (e.g. her lovely, underappreciated Feeling the Space). The project of Ocean Child: Songs of Yoko Ono, a tribute album spearheaded by Death Cab For Cutie’s Benjamin Gibbard (donating all proceeded to WhyHunger), is to excavate Ono’s music from relative obscurity and illuminate the long-ignored genius of her songwriting. While the album assembles a host of talented musicians, these covers lack the creativity which backbones Ono’s work as an artist. Yet ultimately, it’s effective as a tribute album, highlighting the uniqueness of Ono’s music which its (mostly) mediocre renditions lack.

The album begins with Sharon Van Etten’s stab at ‘Toyboat’. Van Etten rewrites the original’s idiosyncratic production into a stripped-down soft rock track. Her vocal performance feels lazy and impersonal singing Ono’s words: a recurring problem throughout the album. For instance, Death Cab For Cutie’s ‘Waiting for the Sunrise’ translates the song into a modern indie rock context, but the results are bland and sung without an ounce of charm. While many of these artists (other prime offenders include Amber Coffman, Jay Som, and Stephin Merritt) succeed in transplanting Ono’s songs into a new musical genre, they fail to capture the emotion, peculiar instrumentations, or sincere vocal performances which define Ono’s music. These are trite covers, playing the right notes with no zest and little apparent affection.

Not every track on Ocean Child is lifeless. Japanese Breakfast’s minimalist piano-and-voice rendition of ‘Nobody Sees Me Like You Do’ is heartbreaking, achieving the same tenderness as Ono’s original with an added rawness. Sudan Archives’ ‘Dogtown’ re-imagines the song as a tense, string-heavy pop song. The track is always developing, yet anchored by a staccato violin melody. Sudan Archives’ voice feels at home singing Ono’s simple-yet-enigmatic words, injecting a certain suaveness into the song. Most noteworthy on the album is Thao (of Thao & The Get Down Stay Down)’s interpretation of ‘Yellow Girl (Stand By For Life)’. The original song is a bittersweet soft rock tune, a highlight from Ono’s most accessible album. Thao’s version, however, is an experimental and jarring deconstruction, built around a glitchy drum pattern and disconnected vocal tracks which often fall out of sync. Janky and occasionally cacophonous, Thao brings one of the few traces of Ono’s own bold and boundary-pushing sensibilities, a carefree originality Ocean Child otherwise lacks.

In the end, Ocean Child raises questions about what constitutes a great tribute album. Few of these artists’ interpretations are memorable. They sing the same words and play the same chords as Ono’s originals yet lack the attention to detail, the sincerity (or the irony) of Ono’s vocals, and the rich, unpredictable production. These songs inadvertently reveal the genius of Yoko Ono: a highly conceptual and eclectic musician, always evolving, poetic yet unpretentious, and with a seemingly effortless ability to mine emotion from even the simplest lyrics. While the songs on Ocean Child are largely vanilla throwaways, Ono’s absence is the ultimate evidence of her genius. Without her, these songs simply don’t work.