David Byrne, Mitski, André 3000, and More to Feature on Son Lux’s ‘Everything Everywhere All at Once’ Soundtrack

David Byrne, Mitski, Moses Sumney, André 3000, and Randy Newman are among the artists who have contributed to the soundtrack for the upcoming A24 film Everything Everywhere All at Once. The sci-fi film is scored by Son Lux, whose 49-track album also features Nina Moffitt, Chris Pattishall, Rob Moose, yMusic, Surrija, and actor Stephanie Hsu. Mitski and David Byrne duet on ‘This Is A Life’ and ‘This Is A Life (Extended)’, while André 3000 plays flute on multiple tracks. Check out the full tracklist below.

“Even though we knew from the moment Daniels asked us to score this film that it would push us in new and unexpected directions, we couldn’t have predicted how much we’d learn from the project,” Son Lux said in a statement “What emerged was our most ambitious undertaking to date, over two years in the making, resulting in two hours of new music. It was an opportunity for us to play, to infuse humor into our work, and to experiment from and beyond our various musical backgrounds.”

Everything Everywhere All at Once is directed by Daniel Kwan and Daniel Scheinert and will hit theaters on March 25, following its premiere at SXSW Film Festival on March 11. The soundtrack is out on April 8. 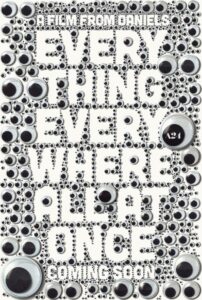 Everything Everywhere All at Once (Original Soundtrack) Tracklist: