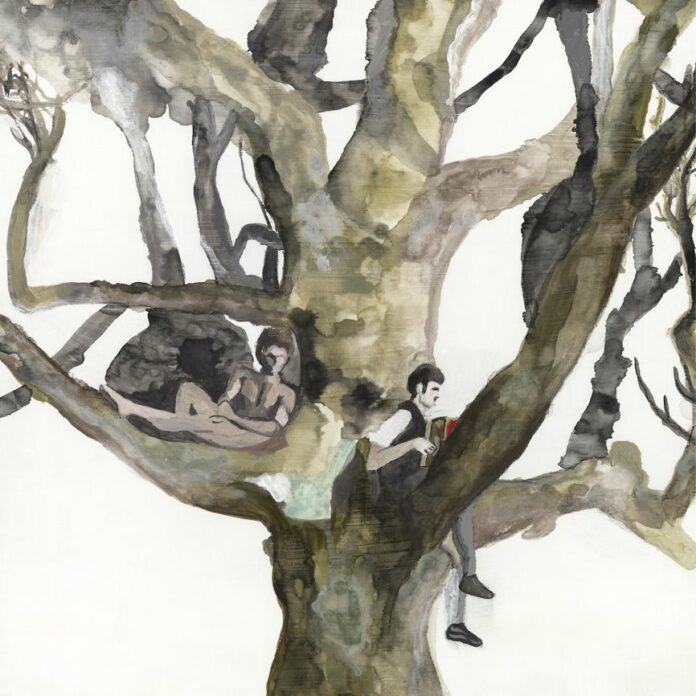 You don’t connect with Destroyer songs so much as you’re inexplicably drawn to them. Whether you’re a longtime fan or have just discovered Dan Bejar’s music, you’ve probably already given up on relating to his writing, and the title of his thirteenth album, Labyrinthitis, certainly doesn’t help – a word that’s so weird it surely has to be made up, which isn’t the kind of thing that tends to make a songwriter more approachable. It does make more sense when you find out it’s actually a term for an inner ear disorder that Bejar may or may not have, not only because the album is best described as “dizzying” but because it dwells in this state of disorientation – like when you find yourself scouring the internet for an explanation to a medical issue and end up completely lost in the abyss. This is closer to what the title came to mean for Bejar, who told Uproxx it might allude to someone “who’s addicted to mazes, or someone who chronically takes the wrong turn.”

Starting down one path and then going in a few different directions is an apt metaphor for Labyrinthitis, which Bejar and his frequent collaborator John Collins began working on during lockdown in 2020 with the intention of making a straightforward techno album. Traces of that original vision, however sincere it may have been, are still present on the album; but this being Destroyer, there’s something slightly off-kilter and elusive about even the smoothest cuts here, as if they’ve been fractured and fragmented through obsessive tinkering. In the grander scheme of Destroyer’s catalog, it fits right in with 2017’s Ken and 2020’s Have We Met as the final in a trilogy of albums that have generally leaned more towards pop. But it’s a testament to Bejar’s uniquely eccentric voice as an artist that he can make his most accessible record to date and still sound profoundly strange, at once hopeful and haunted.

The songs on Labyrinthitis can mostly be described as sort of or anti-something, which isn’t really solid ground for a cohesive, engaging listen. But that’s not to say the album is a misstep. It keeps finding ways to pull you in – whether it’s by serving lush, elegant grooves (‘It Takes a Thief’, ‘All My Pretty Dresses’) or contemplative atmospheres to sink into, like on the instrumental title track. A lot of the songs can be categorized as danceable, but they don’t exactly make you want to get up and dance; it’s what you’d play at a party that’s already nearing its end, when dancing seems like an impossibility and forming coherent sentences is even harder, but you can still kind of have fun. There are still parts that stand out, even if you’re not used to Bejar’s theatrics; listening to the album for the first time, a friend was struck by the “Ruff ruff goes the beagle to the terrier” line on ‘Eat the Wine, Drink the Bread’, while another likened the immaculately fuzzed-out guitar sound on ‘It’s In Your Heart Now’ to a whale. (There’s your pitch: Destroyer, more animal songs.)

What’s captivating about Labyrinthitis is not its overarching theme (there really isn’t one) or sonic palette (it’s all over the place), but just how many surprises Bejar and his collaborators manage to throw into the mix, whether consciously or subconsciously. As someone who’s fairly familiar with Destroyer’s prior work, I was shocked by just how many bizarre turns it takes – but they never felt wrong. For one thing, Bejar has such an incredible ear for melody that he often seems to be stumbling upon a hook. There’s a lot to say about ‘June’ that’s probably better left unsaid, but it’s not such a coincidence that one of the album’s longest and most absurd songs is also its catchiest, as Bejar turns a reference to the Fall (“Everyone’s happy to strike for more pay”) into a line that is, in his words, “potentially academic, which means it is potentially despicable,” but is nevertheless one of the most memorable refrains of the year so far.

Of course, just because an album has some noteworthy, incomprehensible moments doesn’t make it a great one. But there’s something genuinely exciting about Bejar’s commitment to trying new ideas, the way he’s been consistently changing up his sound while retaining a distinct musical identity – yet never really revealing too much about himself. What draws me to Labyrinthitis is just how unfiltered, even personal it is. Despite everything I’ve talked about, there is still an arc to the album that, as vague as it is, is also quite moving. Bejar has referred to the main character of the album as “the singer,” and he further removes himself by portraying him as a kind of cartoonish villain. But whoever he is, you can’t help but resonate with a guy who turns to the music of his youth yet doesn’t derive much comfort from it, who’s past the point of censoring his art but still clearly cares. Even if the middle section is quite abstract, the album begins with the sweeping emotionality of ‘It’s in My Heart Now’ and comes back around with the penultimate track, ‘The States’, where Bejar addresses a younger version of himself, stuck at some bus stop in the middle of nowhere. That person might seem distant, but his deep, obsessive heart stretches all throughout Labyrinthitis.

Album Review: Destroyer, 'Labyrinthitis'You don’t connect with Destroyer songs so much as you’re inexplicably drawn to them. Whether you’re a longtime fan or have just discovered Dan Bejar’s music, you’ve probably already given up on relating to his writing, and the title of his thirteenth album, Labyrinthitis,...