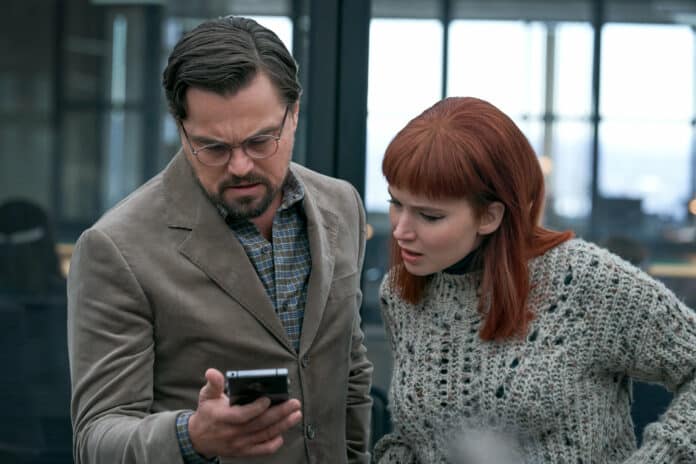 Adam McKay’s Don’t Look Up premiered on Netflix in December 2021 after much anticipation. With an A-list cast and an exciting premise, the satire was primed to be a hit. However, critics and casual viewers were left divided by the end of its two-and-a-half-hour runtime. Nevertheless, the film scored an Oscar nomination for Best Picture, as well as Best Original Screenplay, Best Original Score, and Best Editing. The script in particular jumps off the page, with a slew of memorable quotes, both serious and funny.

The film follows two scientists (Leonardo DiCaprio and Jennifer Lawrence) who discover a very large comet on course toward Earth. If it hits, it will destroy the entire planet. Unfortunately, nobody seems to take their concern seriously – not the president and her Chief of Staff son (Meryl Streep and Jonah Hill), nor a pair of talk show hosts who could give the issue more exposure (Cate Blanchett and Tyler Perry), nor the general public. Whatever criticisms the film may receive, it brings to life a terrifyingly real situation, reflecting the struggles scientists face in trying to bring the world’s attention to pressing issues like climate change.

Dr. Teddy Oglethorpe: … [the comet] is roughly five to ten kilometers wide. Which…

Dr. Randall Mindy: This isn’t happening, right? Kate, this isn’t real, right? This is just some sort of alternate reality, right? Say something.
Kate Dibiasky: I gotta go get high.

Kate Dibiasky: The general – he charged us for the snacks. But they’re free … Why on Earth would he do that?

Dr. Randall Mindy: … about 36 hours ago, Ph.D. candidate Kate Dibiasky here discovered a very large comet.
President Orlean: Oh, good for you.
Dr. Randall Mindy: A comet between five and ten kilometers across, that we estimate came from the Oort cloud, which is the outermost part of the solar system. And using Gauss’s method of orbital determination …
President Orlean: Woah, woah, woah, what?
Jason Orlean: I’m so bored.

Kate Dibiasky: What Dr. Mindy is trying to say is there’s a comet headed directly towards Earth. And according to NASA’s computers, that object is going to hit the Pacific Ocean at sixty-two miles due west off the coast of Chile.
Jason Orlean: Then what happens? Like a tidal wave?
Dr. Randall Mindy: No. It will be far more catastrophic. There will be mile-high tsunamis fanning out all across the globe. If this comet makes impact, it will have the power of a billion Hiroshima bombs. There will be magnitude ten or eleven earthquakes.
Jason Orlean: You’re breathing weird. It’s making me uncomfortable.
Dr. Randall Mindy: I’m sorry. I’m just trying to articulate the science.
Jason Orlean: I know. But it’s, like, so stressful. I’m trying to, like, listen.

President Orlean: Okay, funny story. When I was running for president, I had to sneak cigarettes for the whole first month of the campaign because, you know, photographs of me smoking went for a hundred grand a pop … eventually, I just got sick of it. And I just said, “You know what, I’m going to smoke whenever I want to.” Guess what happened. I went up three points in the polls.
Jason Orlean: They loved that she kept it real. They love watching a smoke show smoke. I can’t think of another president that I’d ever want to see in Playboy.

Dr. Randall Mindy: I’m sorry, but not everything needs to sound so goddamn clever or charming or likable all the time. Sometimes we need to just be able to say things to one another. We need to hear things! … there is a huge comet headed towards Earth … We saw it with our own eyes using a telescope. I mean, for God’s sake, we took a f**king picture of it! What other proof do we need? And if we can’t all agree at the bare minimum that a giant comet the size of Mount Everest, hurtling its way towards planet Earth is not a f**king good thing, then what the hell happened to us? I mean, my God … how do we even talk to each other? … I’m sure many of the people out there aren’t even gonna listen to what I just said ’cause they have their own political ideology, but I assure you, I am not on one side or the other. I’m just telling you the f**king truth.

Kate Dibiasky: They found a bunch of gold and diamonds and rare sh*t on the comet. So they’re gonna let it hit the planet to make a bunch of rich people even more disgustingly rich!

Jason Orlean: But I also want to give a prayer for stuff. There’s dope stuff, like material stuff, like sick apartments and watches, and cars, and clothes and shit that could all go away and I don’t wanna see that stuff go away. So I’m gonna say a prayer for that stuff. Amen.

Dr. Randall Mindy: The thing of it is, we really did have everything, didn’t we? I mean, when you think about it.

Jason Orlean: What’s up, y’all? I’m the last man on Earth. Sh*t’s all f**ked up. Don’t forget to like and subscribe. We out here.