Built to Spill have announced a new album: When the Wind Forgets Your Name will drop on September 9 via their new label, Sub Pop. Lead single ‘Gonna Lose’ is out today alongside a video directed by Jordan Minkoff and featuring animations from Minkoff and Lee McClure. Check it out below and scroll down for the album’s cover art (designed by Alex Graham) and tracklist.

When the Wind Forgets Your Name marks the band’s first album of original material since 2015’s Untethered Moon. It was produced by Doug Martsch, who recorded the album with two members of the Brazilian psychedelic jazz-rock band Oruã, Le Almeida and João Cases. Oruã will support Built to Spill on tour this year, while Martsch will be backed by his new lineup of Melanie Radford, and Teresa Esguerra.

“Making When the Wind Forgets Your Name was such a great experience,” Martsch said in a press release. “I had an incredible time traveling and recording with Almeida and Casaes. I also learned so much about Brazilian culture and music while creating it. My Portuguese was terrible when I first met Almeida and Casaes, but by the end of the year it was even worse.”

When the Wind Forgets Your Name Cover Artwork: 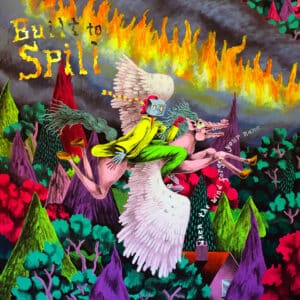 When the Wind Forgets Your Name Tracklist: