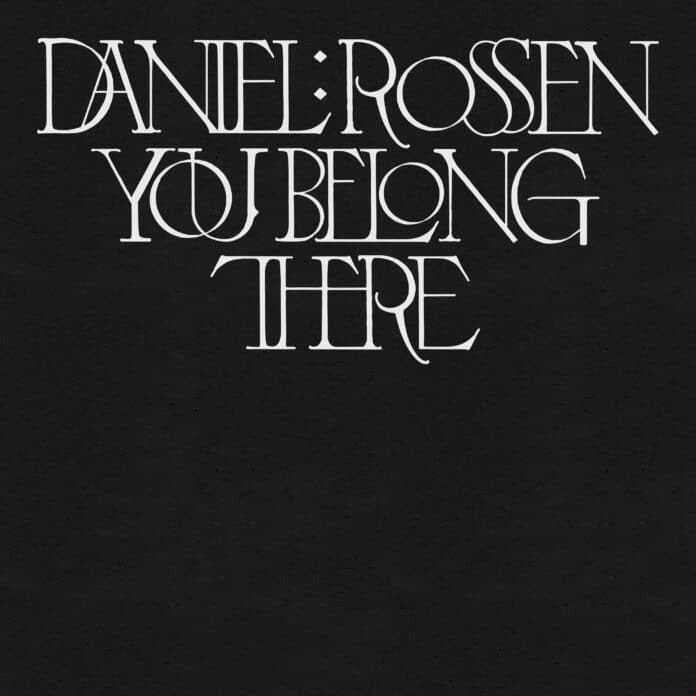 You Belong There, the debut studio album from Grizzly Bear’s Daniel Rossen, strikes a delicate balance. Its richly intricate arrangements and airy vocals aren’t such a great departure from the lush chamber folk of the group he made his name with – whose last album, Painted Ruins, came out half a decade ago, though it’s 2006’s Yellow House that more often echoes through this record – but it also feels like a deeply personal statement. Having learned to play different instruments during lockdown, including the cello, clarinet, and other woodwinds – while also reacquainting himself with upright bass, an instrument he last played as a child – Rossen handled most of the instrumentation on You Belong There, with Grizzly Bear’s Christopher Bear contributing drums and percussion throughout. On one hand, it serves as an opportunity to showcase his musical virtuosity, particularly as a guitarist capable of harnessing the instrument’s unique ability to evoke a state of solitude. On the other, it stands as a work of enchanting vulnerability that contemplates the turbulence of life during periods of change and constant motion, reflected as much through Rossen’s emotionally direct lyricism as in his propensity to mold, stretch, and fill out the songs in meticulously considered yet unexpected ways.

The album arrives ten years after Rossen’s Silent Hour/Golden Mile EP, which emerged from a time of isolation following his move out of the city to rural upstate New York. The musician now lives in the hills of Santa Fe with his wife and young daughter, and it’s in this new environment that You Belong With Me took shape. Perhaps as a result of these transitions, the songs avoid a romanticized view of the wilderness and self-exile, drifting instead with a sense of complex fluidity. Although the overall effect is unusually revealing, Rossen’s songwriting is far more ambiguous than it is purely confessional: “Chased out to a stolen range/ The red plains beyond the fence/ They’re dead calm but there’s solace here/ It’s a choice to live that way,” he sings on ‘Celia’, as if haunted by the ghost of something familiar yet out of reach. Elsewhere, he fixates on the empty remnants and lingering anxieties of the past, lamenting wasted time and purpose: “Nothing’s lost/ When there’s nothing there/ Whatever was and whatever will/ We belong here now,” he declares on the magnificent ‘Unpeopled Space’, but the busyness and warmth of the composition anchors the song in the present, lifting it into a shimmering space.

The music never quite settles in one place; at times, in the absence of a concrete narrative, it seems to respond directly to the evocative power of phrases like “relentless drifting” and “mindless movement.” Even shorter tracks like ‘Celia’ and the title track are rife with tension, thanks in part to the dynamic interplay between Rossen and Bear, as well as Rossen’s haunting use of vocal harmonies. ‘Tangle’, which is almost half the length of the album’s longest track, is a spectacular highlight; it begins with waves of eerie, manic dissonance but quickly finds beauty at the eye of the hurricane – “Terror kept us shaking but it was something to behold” – before ultimately landing on a note of strange intimacy, unveiling a quiet but simmering passion. When the songs do dwell in that ominous space for longer, it’s less about musical ambition than curiosity and freedom to explore where it might take them: ‘I’ll Wait for Your Visit’ moves at a languid, dreamlike pace that mirrors its stream-of-consciousness flow, while ‘Keeper and Kin’, a song seemingly about struggling to let go of your youth, becomes something of an exercise in restraint.

‘Repeat the Pattern’ is an interesting if slightly odd place to end You Belong There. It is the most straightforward and melodic track on the album, almost unburdened in its simplicity, though still coloured by tasteful embellishments. For an album that thrives in such an insular environment, where all that’s heard is the echo of one’s self, there’s something liberating about the way it adopts an external, almost impersonal approach to nature and all that lives through it: “Set yourself to the side and admire this anonymous place/ Ice that blankets the hills and beats the bramble down to the clay.” If nothing magical truly lasts, then all that’s left is to witness how things grow and decay, escape and return over years and years – and the lighter it all seems, the more unreal, less alone, the more you’ll be able to give back.