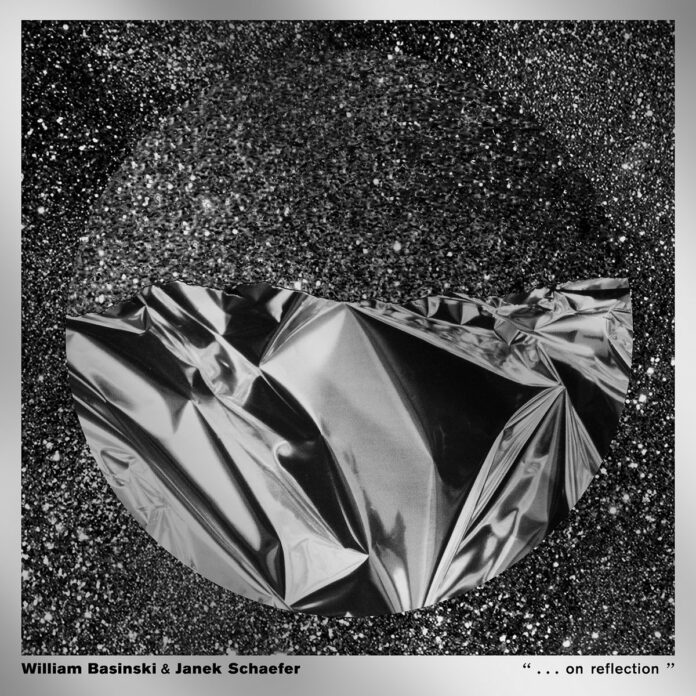 William Basinski is an esteemed documenter of gloom. In his earlier works like The Disintegration Loops or Melancholia, he repurposed his personal archive of tape loops, lingering on the breakdown of sounds lost in time. The Disintegration Loops, which records a gradual deterioration of looped tapes, was finished on the rooftop of a Brooklyn apartment on September 11th, 2001. The album’s bleak, slowly collapsing sound became emblematic of the harrowing future which followed 9/11. Consequently, the project found a cultural relevance rare for an ambient album. Yet Basinski’s body of work is far more varied than the pure moroseness he’s often associated with. In their new work “ . . . on reflection ”, Basinski and his collaborator Janek Schaefer, the avant-garde composer and a fellow master of repurposing bygone sounds, return to ideas of retrospection with results that prove unexpectedly bittersweet.

“ . . . on reflection ” is a minimalist assembly of sounds extracted from both Basinski and Schaefer’s musical archives. The album, crafted long-distance between L.A. and London over an eight-year span, structures around fragmented piano melodies. Over the course of five tracks (essentially one piece broken into five movements), the piano glides along, more romantic and less atonal than typical Basinski projects. The melodies themselves are unstable, with no coherent structure. Yet they remain central to the track: an omnipresent voice. In the background, a variety of disparate field recordings waft in and out. They simmer quietly, sometimes gaining prominence and rising to the same volume as the piano. The sounds range from gentle birdsongs to the roar of vehicular engines. Basinski and Schaefer use field recordings to situate the spaceless sound of the heavily reverbed piano in transient physical environments. Sounds recorded over a long span of time in an array of distinct places merge into one work based around the tension between unity and disconnect.

However, unlike with The Disintegration Loops, the re-interpretation of a personal music archive doesn’t result in a bleak portrait. Basinski and Schaefer produce a tranquil ambient work, reminiscent of new age artists like Yutaka Hirose. Unlike recent Basinski albums like Lamentations or On Time Out of Time, there’s an ease to “ . . . on reflection ” and its archival sounds. On those previous records, the music’s spacelessness feels burdensome. Bassy reverberations echo endlessly into a sphere of infinite disquiet. With “ . . . on reflection ”, Basinski and Schaefer situate their archival sounds in soothing environments; the persistent call of bird tweets almost feels cliché in its pleasantness. Ultimately, the timelessness of the music isn’t a gateway to existential doom but, rather, to something more peaceful and meditative.

“ . . . on reflection ” is dedicated to Harold Budd, the seminal ambient artist (though he’d reject the category of “ambient”) and pianist. Budd’s influence on Basinski and Schaefer is undeniable. “ . . . on reflection ” shares a similar approach to soft, piano melodies: notes soaked with reverb, until the space of their recording feels abstract. The album is a humble tribute to a master who passed away a year and a half ago and also a spiritual exercise, prompting us to find pleasure in becoming unbound from space and time.