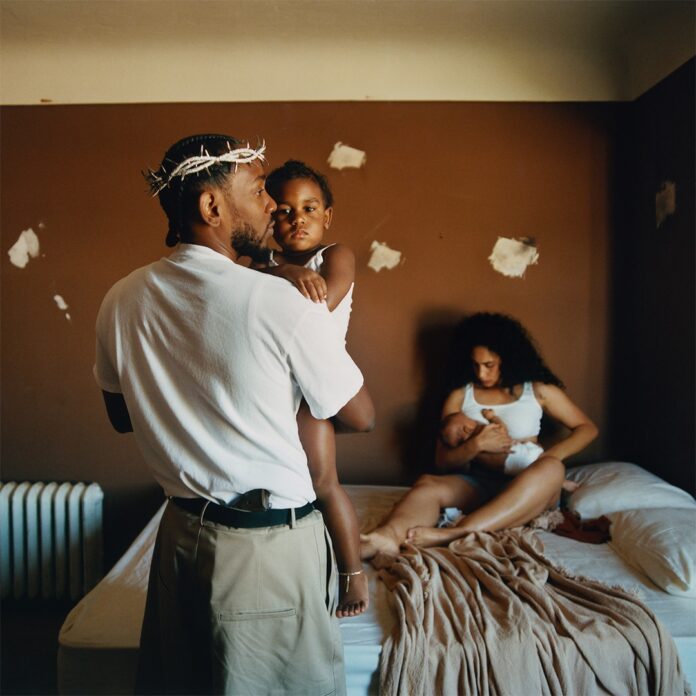 How do you return from nearly five years of off-the-grid remoteness after a string of instant-classics, a Pulitzer prize, and renown as an infallible wordsmith? Kendrick Lamar’s reputation is larger-than-life. In his absence, it’s only bubbled to newer heights, sculpting a mortal man into a messianic figure. Mr. Morale & the Big Steppers, the long-awaited follow-up to his 2017 victory lap DAMN., reckons with his newfound status as savior figure. Unfolding as a 73-minute therapy session, the album incorporates strokes of genius, blandness, and baffling misguidedness into a self-portrait equally moving and frustrating. Both deliberately and incidentally, Mr. Morale is a refutation of Kendrick’s purported immaculateness, capturing him as a flawed human and artist.

Overall, Kendrick’s lyricism is blunter than ever. Whereas To Pimp a Butterfly mixed direct addresses with cryptic metaphors and narratives, Mr. Morale flocks towards the former. On ‘We Cry Together’, Kendrick re-imagines Ice Cube’s back-and-forth, battle of the sexes-type dialogue with Yo Yo on ‘It’s A Man World’s’ as a domestic altercation. Kendrick and actress Taylour Paige (in her rap debut) hurl insults at each other. Petty and venomous disses swirl around until the argument extends beyond a quarrel between two individuals, into a gendered dispute. In the end, the volatile argument deflates into sex (a resentful “fuck you” becomes a lustful “fuck me”). The performances are a little histrionic and the final note of bathos undoes some of the dramatic resonance. Though awkward in delivery, it’s a welcome change of pace in the tracklist’s driest stretch.

On ‘Sing About Me, I’m Dying of Thirst’ off good kid, m.A.A.d city, Kendrick narrated as side characters from his personal odyssey. In one verse, he raps as a female sex worker detailing the minutae of her work. She critiques Kendrick’s own ‘Keisha’s Song (Her Pain)’ from Section.80: a didactic tragedy about a sex worker, ending with her abrupt rape and murder. ‘Sing About Me…’ marked growth in Kendrick’s storytelling, exploring peripheral characters and even using their voices as self-critique without reducing them to icons of his own maturity. On the other hand, Mr. Morale’s ‘Auntie Diaries’ is a full regression, posturing his trans relatives as vessels for a personal journey towards acceptance. It’s a terrible song, devoid of ‘Sing About Me…’’s decentering of the self. Sprouting from a Macklemore-ian cocktail equal parts well-intentioned and tone-deaf, Kendrick wrestles with his long-delayed understanding of his trans uncle and cousin’s struggles. Rhyming through a minefield of deadnaming and misgendering, he treats his arrival at baseline compassion as a revelation. The undeserved, climactic orchestral swell does no favours, positioning his feeble gesture of acceptance as a roaring act of courage.

The album finds its emotional zenith on ‘Mother I Sober’, the penultimate track. Here, Kendrick traces reverberations of violence and abuse across his life, his family, and larger Black communities. The song’s intimate yet epic in scope, punctuated by a tearful chorus from Beth Gibbons (of Portishead). Mr. Morale is a personal album, its therapeutic framing device allowing Kendrick to speak freely of guilt and traumas. This is hardly different from his other albums (To Pimp a Butterfly’s ‘u’ is a particularly volcanic and eruptive confessional). Yet here, there’s a directness to the autobiographical elements: a need to be understood. Fearful of metaphors’ tendency towards abstraction, Mr. Morale uses them sparingly. As a standalone song, ‘Mother I Sober’ is a towering achievement rivaling Kendrick’s best work. Yet as a track within a larger album, its earnestness and meditations on sexual abuse are muddied by rapist-and-rapper Kodak Black’s presence throughout the album, in both features and allusions alike. Kendrick’s incorporation of Kodak Black is a hamfisted rebuke against “cancel culture,” ultimately eroding the empathy of songs like “Mother I Sober”.

On ‘Mirror’, the album’s bouncy finale, Kendrick reveals a decision. He renounces the fantastical expectations leagues of fans constructed around the image of Kendrick Lamar. He’s neither a Christ figure nor a revolutionary; he’s a father and a husband. “Sorry I didn’t save the world” and “I choose me, I’m sorry”, he remarks: a half-hearted apology to preachers of his mythological status. His dismissal of political duty is confused by the album’s fixation with commenting on major events transpired during his self-imposed isolation (from COVID to Kanye/Drake beef). Yet, ultimately, Kendrick’s concluding admission is an act of shattering delusions. On Untitled Unmastered’s ‘untitled 01’, Kendrick spoke of profound obligation: “I made To Pimp a Butterfly for you/Told me to use my vocals to save mankind for you”. On ‘Mirror’, Kendrick confesses that he’ll never live up to this duty. Mr. Morale is a product of his coming to peace with this acceptance.

Album Review: Kendrick Lamar, ‘Mr. Morale & The Big Steppers’ How do you return from nearly five years of off-the-grid remoteness after a string of instant-classics, a Pulitzer prize, and renown as an infallible wordsmith? Kendrick Lamar’s reputation is larger-than-life. In his absence, it’s only bubbled to newer heights, sculpting a mortal man into...