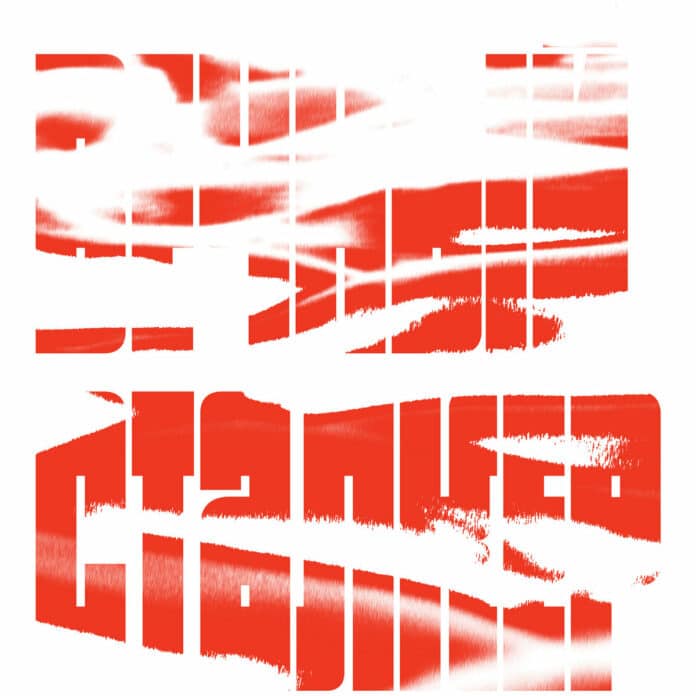 Eternal Stalker, the first collaborative album from Japanese noise legend Masami Akita (aka Merzbow) and Australian sound philosopher Lawrence English, is a merger of their obsessions and techniques. Unfolding through field recordings of a massive industrial warehouse and its environment, the album rests at the intersection between nature and industrial space. The sounds are both exhausting and impressively dynamic, illustrating a transformative liminality through the medium of field recording.

This is an irresistible collaboration. Merzbow’s music encapsulates the roaring ethos of an industrial world: true metal machine music. His extensive oeuvre of harsh noise records (spanning over forty years and hundreds of releases) unleash volatile waves of mechanical sound, all-consuming until all traditional conceptions of “nature” are distant memories. Caverns of feedback scream back into more caverns of feedback. The rare inclusion of any standard musical conventions (ie. rhythm or melody) feels jarring in Merzbow’s work. His sounds evoke an air of self-sufficiency. It’s easy to forget an artist has (often meticulously) crafted these sounds, since Merzbow’s music feels entirely removed from anything biological. Consequently, he leans into the post-human potential of Noise.

Yet for Merzbow, whose experimentations and re-inventions unfold primarily within the admittedly limited parameters of industrial cacophony, collaboration with other artists allows for an invigorating re-adaptation of his sound. Merzbow’s work with musicians (from Boris to Xiu Xiu to Full of Hell) treat his harsh noise as an instrument amongst other instruments, crafting less monolithic pieces and reaching further into musical contradiction.

On the other hand, much of Lawrence English’s work positions him as a sonic nature documentarian (though he’d likely contest the perceptions of objectivity often attributed to documentation). Last year’s A Mirror Holds The Sky was sculpted from English’s fifty-hour archive of Amazon rainforest nature recordings, recorded almost fifteen years prior. Each track embodies different spaces English visited during his Amazonian residency. The incredibly detailed soundscapes echo with rushing water and the constant cries of insects: personal experiences of spaces archived in sound. While English’s prolific catalogue contains multitudes (including dark and distorted, Tim Hecker-esque drone records like Wilderness of Mirrors), his recurring relationship to nature recordings is seemingly antithetical to the industrial screeches of Merzbow’s work.

Eternal Stalker begins with bursts of thunder and rainfall. They clash against the metallic surface of the Australian warehouse where the entire album was recorded. The rain sounds nothing like it does on A Mirror Holds The Sky. Here, downpour is metallic and bassy, like some over-amplified tape hiss. Yet slowly, as the album evolves, mechanical sounds from within the warehouse mix with the noise of weather. The line between the mechanic and organic becomes blurred. By the back half of ‘A Gate of Light’, the second track, the mix has been subsumed in noise: rainfall indecipherable from the grating cries of machinery. As a collaboration, it’s a pure mixture of Merzbow and English’s fixations. Nature and machinery weld together through the platform of field recording.

The music is also unexpectedly narrative. There’s no cohesive arc, yet the sounds exist in flux, moving across a vast assortment of noises and telling the story of an overnight factory. While primarily a representation of a liminal space and its unnerving atmosphere, there’s dynamism to the sounds. The space evolves from eerie silences to the all-encompassing howls of a room full of machines. Sounds fluctuate from foreground to background. In the stretch from ‘The Visit’ into ‘Magnetic Tapes’, the mechanical caterwaul of machines begins as a distant rumble and then grows overpowering. There are even peaceful moments along the way (e.g. the gentle background hissing on ‘Black Thicket’ or the slow fade out which concludes the album on ‘A Thing, Just Silence’, as once abrasive sounds become a mere hum). Sometimes everything sounds richly textured. At other points, it’s a singular wrecking ball of assaultive noise.

Eternal Stalker is transitory music, plunging into the depths of unknown spaces: a harsh noise odyssey. The album’s title is a nod to Andrei Tarkovsky’s sci-fi classic Stalker, a movie about three men wandering through “the Zone”: a bleak and other-wordly landscape. Like Stalker, Eternal Stalker is a work about inhabiting alien spaces and becoming overpowered by their ambiance. It’s a transcendental album, moving towards a new post-human relationship through sound and decentering our own biology.