Archers of Loaf have announced their first new album in 24 years. Reason in Decline is slated for release on October 21 via Merge. Today’s announcement comes with the release of a new single, ‘In the Surface Nois’, alongside an accompanying video. Check it out below and scroll down for the LP’s cover artwork, tracklist, and the band’s upcoming tour dates.

Reason in Decline marks the band’s first studio album since 1998’s White Trash Heroes. “For Archers lyrics, songs, everything, I had to imagine I was this angry white curmudgeon college guy who hates capitalism and consumerism and has a broken heart,” Erich Bachman explained in a press release. “He’s bitter about relationships, so he makes fun of things to seem cool. As I’ve aged, I’m far less like that anymore, but it is a part of my personality. I just wasn’t excited about re-energizing it. I used that guy as a starting point to get myself out of the gate, but in the course of writing the actual songs, he eventually went away.”

He continued: “What I really think about going back to the Archers and doing a new record is that the three other members of this band are awesome. It’s not about responding to the past or whatever our bullshit legacy is. I just wanted to work with these guys because I knew the chemistry we had and that we still have. I knew that was rare.” 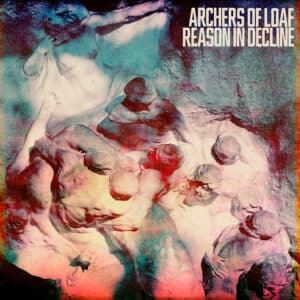 1. Human
2. Saturation and Light
3. Screaming Undercover
4. Mama Was a War Profiteer
5. Aimee
6. In the Surface Noise
7. Breaking Even
8. Misinformation Age
9. The Moment You End
10. War Is Wide Open