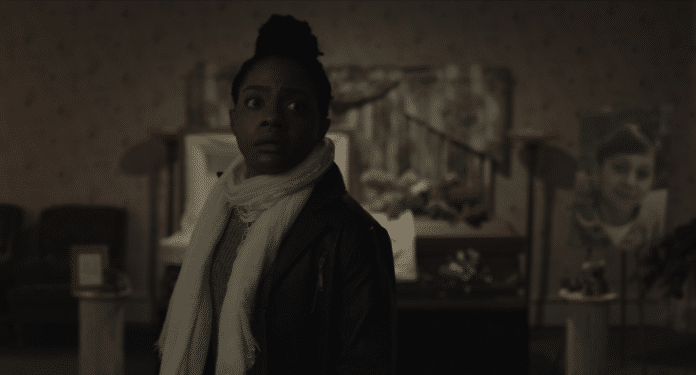 Back in 2016, Andy Mitton received acclaim on the international festival circuit for his breakout feature We Go On (co-directed with Jesse Holland), an oddly life-affirming horror movie about a man so terrified of his own mortality that he is willing to give thousands of dollars to anyone who can prove to him that there is life after death. His follow-up The Witch in the Window (2018) cemented him as one of the most exciting independent genre filmmakers working in America today: a deeply effective blend of horror and family drama that follows a father and son trying to flip a haunted house. Mitton’s fourth film, The Harbinger, is his best yet – and by far the finest horror movie to emerge from the covid pandemic. Our Culture reviews the film here as part of its selection from the 2022 Fantasia International Film Festival.

The Harbinger takes place in 2020; the pandemic is raging and America is in lockdown. Monique (Gabby Beans) is isolating in upstate New York with her family. That is, at least, until she receives a phone call from her old friend Mavis (Emily Davis). Mavis is living on her own in a crumbling and sparsely furnished New York City apartment and, though she has not seen Monique in years, she asks her to breach lockdown restrictions to come and keep her company. Mavis is lonely and afraid, but not just because the pandemic has turned the world upside down. She claims that she is being stalked in her dreams by a malevolent entity – one that wants to keep her sedated so that it can feed on her negative emotions. Monique is understandably skeptical until she sees the Harbinger in her own nightmares, and the friends soon come to realise that the demon isn’t just dangerous, it’s infectious.

So The Harbinger very obviously draws its horror from the pandemic; as Mavis wearily states early in the film, ‘Even when I manage to wake up I’m still in a fucking nightmare – we all are.’ But to think of the film’s eponymous entity as a metaphor for disease would do a disservice to its subtextual complexity. After all, covid is ever-present in its narrative. Monique arrives at Mavis’s apartment block to see a mother carrying her sick son into the building, and is able to hear his vicious coughing through the ceiling from the moment she steps foot in her friend’s apartment. The abject horrors of contracting coronavirus need no further embellishment, then; the Harbinger functions not as a metaphor for the damage the virus might do to our individual bodies, but rather a manifestation of its wider impacts on human society.

For this is a film less about infection than isolation, social disconnection and an acute fear of being forgotten by the world beyond our four walls. The Harbinger targets the lonely and vulnerable, disconnecting them from their support networks and drawing them into one long, continuous nightmare. Its modus operandi is the perfect metaphor for the traumas of lockdown, especially for those who endured endless months without meaningful human contact (as Monique asks Mavis, ‘Wouldn’t it help just to know you’re not alone?’). That by itself is a powerful metaphor, but the ultimate fate of the Harbinger’s victims – who seemingly disappear without trace – carries even more of a thematic punch. It speaks to our deplorable tendency to put those who have died from covid out of our minds, or at the very least to reduce them to a statistic. No longer people with lives, hopes and dreams, but just another number on a graph.

A sense of disorientation is aided by the film’s disquieting dream sequences. Typically, horror films concerned with monsters that plague our dreams, such as The Slayer (1982), A Nightmare on Elm Street (1984) or Dream Demon (1988), tend to lean into lurid and surreal aesthetics to realise their dreamscapes on the screen. On the other hand, The Harbinger – lensed by Italian cinematographer Ludovica Isidori – renders the unconscious mind in exactly the same desaturated colour palette that pervades the rest of the film, and as the narrative progresses it becomes increasingly difficult to tell what is a nightmare and what is waking life. The film slowly descends into one long dream that recalls our collective experience of those months spent in lockdown, when days bled together and time lost all meaning. That spell is only broken when the Harbinger makes itself known.

And when the demon does appear, it is a truly unnerving presence. Mitton’s previous horror films have been unfairly accused of not being ‘scary’ enough, but that criticism certainly does not apply to The Harbinger. The entity at the centre of the narrative is flawlessly realised, combining the hideous visage of a plague doctor with the kind of shadowy humanoid shape so often seen by sufferers of sleep paralysis. It’s a creature design to stand with some of the best in twenty-first century horror cinema and perfectly underscores the film’s existential dread. And – as if to silence his detractors – Mitton uses his monster to stage one of the most effective jump scares in the history of horror, rivalling even the infamous jolt in The Exorcist III (1990).

So The Harbinger deftly captures the collective trauma of the pandemic era, and will undoubtedly emerge as the finest genre film to engage with the real-world horrors that have defined the last few years. But perhaps the film’s most terrifying message is that the pandemic is only the beginning. The word ‘harbinger,’ of course, refers to a messenger who signals something yet to come. And, according to the folklore outlined in its narrative, the film’s demon is best understood as an omen (or a ‘bad idea’). So this shapeshifting figure is not just representative of the havoc wrought by covid, but any number of other things that threaten to destroy us even once the pandemic has passed: the threat of an even deadlier outbreak, an increasingly desperate climate emergency, ever-widening political divisions or any number of other issues that are turning our everyday lives into a nightmare.

Fantasia 2022 Review: The Harbinger (2022)Back in 2016, Andy Mitton received acclaim on the international festival circuit for his breakout feature We Go On (co-directed with Jesse Holland), an oddly life-affirming horror movie about a man so terrified of his own mortality that he is willing to give thousands...