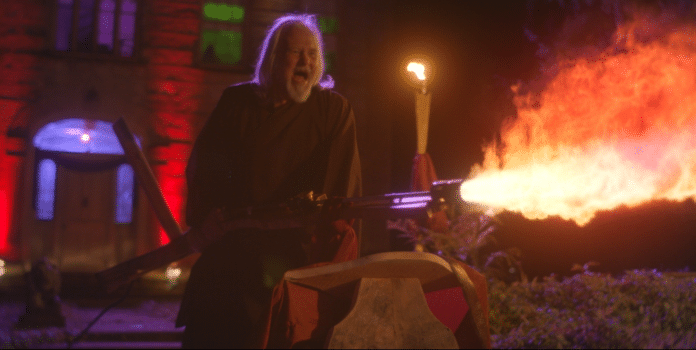 Cult Hero is the new feature from prolific Canadian filmmaker Jesse Thomas Cook, the director of no less than seven low-budget horror pictures (most notably Monster Brawl, which premiered at Fantasia in 2011). Cook’s latest – an over-the-top horror-comedy that tells the tale of a washed-up celebrity ‘cult buster’ desperate to restore his reputation – is hilariously self-aware, delightfully gratuitous and consistently fun. Our Culture reviews the film here as part of its selection from the 2022 Fantasia International Film Festival.

Dale Domazar (Ry Barrett) was a reality television star whose show Cult Buster saw him track down and expose dangerous fringe groups (until he accidentally triggered a mass suicide during a live episode, anyway). Kallie Jones (Liv Collins) is a struggling realtor who needs Domazar’s help – not to sell a house (though that might come later), but to rescue her submissive husband Brad (Justin Bott) from the enigmatic Master Jagori (Tony Burgess). Brad checked into Jagori’s wellness centre to try and get his life back on track, which is a shame given that it is actually a front for a death cult. Together, Domazar and Kallie set out to rescue Brad, and maybe just get Dale back on TV.

As its title suggests, Cult Hero aims to evoke the low-budget, high-concept genre films common to the 1980s: the kind of midnight movie that played flea-bitten grindhouses or, after the VCR became widely available later in the decade, went straight-to-video (often accompanied by lavish cover artwork that vastly missold the film itself). In that regard, it is part of a larger movement in independent Canadian genre cinema. Like Father’s Day (2011), Hobo with a Shotgun (2011), WolfCop (2014), Turbo Kid (2015) and Psycho Goreman (2020) before it, Cult Hero wants to capture the fun of a cult classic watched too late at night on a grainy VHS tape.

And, for the most part, it succeeds. A lot of the film’s retro charm comes in its first and third acts, where the majority of the film’s action (or, more accurately, ‘cult busting’) takes place. It is in the film’s opening and closing scenes that Cook is able to stage some gloriously entertaining set pieces and allow special-effects supervisor Jonathan Craig to offer the kind of gratuitous violence one expects to see in a genre throwback like Cult Hero, as Domazar (and later Kallie) takes on sinister cult leaders and their brainwashed followers with pleasingly gory results.

The film certainly slows down in between, but what keeps it consistently engaging despite a slower pace is its performances. Ry Barrett is the clear standout here; better known for playing straight-faced roles in the likes of The Demolisher (2015) and Lifechanger (2018), he is cast gloriously against type as the utterly ridiculous Dale Domazar. A beer-swilling egotist who speaks in an affected half-whisper and offers running commentary on the film’s events with laughable sincerity, Domazar is a scathing send-up of D-list reality stars. Through Barrett’s pitch-perfect comic turn, he comes across like a hilarious cocktail of second-rate action hero, TV ghost hunter and a background extra torn straight from an episode of Miami Vice (1984–1990). Liv Collins, too, is often laugh-out-loud funny in her role as the uptight Kallie, a caricature of the sort of stereotypical middle-aged woman who constantly wants to speak to the manager.

Barrett and Collins are, of course, greatly aided by Kevin Revie’s screenplay, which is filled with witty one-liners and non-sequiturs. But the writing isn’t only funny, it’s also very clever. While the best word to describe Cult Hero might be ‘fun,’ it isn’t just superficial entertainment. The film’s narrative concern with cults – and people who are trying to find some kind of meaning and belonging in these groups – is also its thematic preoccupation. Everyone in Cult Hero is looking for something: Domazar craves fame, fortune and adoration; Kallie wants to ‘fix’ her broken husband; Brad, in turn, is wiling to try anything that might make his monotonous life worth living; and Master Jagori’s followers are seeking nothing less than ascension to a greater plane of existence.

What all of them forget to do is appreciate what they already have – to stop desperately searching for something more and live in the here and now. The film makes the point that it is exactly the misplaced feeling that something is missing in life that drives vulnerable people into the arms of exploitative cults led by spiritual predators like Jagori. So Cult Hero is ultimately a film that offers its viewers an important message about living in the present and a deranged cult leader wielding a flamethrower – what more could you want?

Fantasia 2022 Review: Cult Hero (2022)Cult Hero is the new feature from prolific Canadian filmmaker Jesse Thomas Cook, the director of no less than seven low-budget horror pictures (most notably Monster Brawl, which premiered at Fantasia in 2011). Cook’s latest – an over-the-top horror-comedy that tells the tale of...