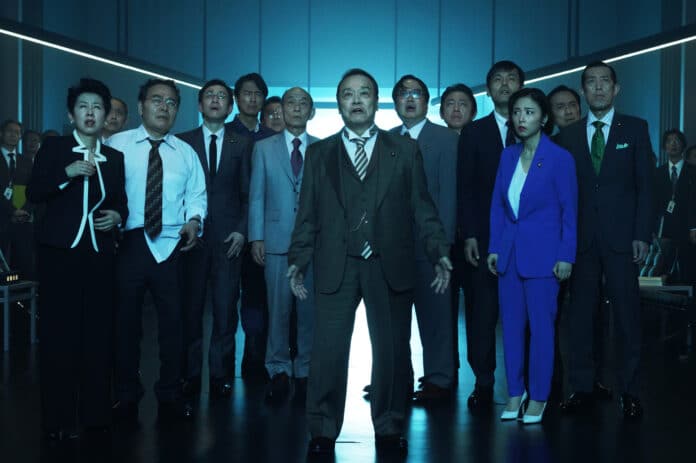 What to Do With the Dead Kaiju? asks, well, what do you do with a dead giant monster? It’s a novel premise, but one that’s squandered as the film unfolds. Despite a solid opening ten minutes which suggest a thoughtful exploration of life after a major crisis, the film loses itself to clumsy comedy and contrived endings.

A giant monster lies dead, apparently killed by a mysterious white light, its mammoth corpse now a problem for the Japanese government. Ministers squabble over whose department should handle the dead beast while the JSF (Japan Special Forces) is called in to assist. Among the JSF is Arata (Ryosuke Yamada), who has a troubled romantic past with Yukino (Tao Tsuchiya), secretary to the Environment Minister. Arata once disappeared for two years, leaving Yukino heartbroken, but the mystery of his absence may in fact herald a solution to the monster crisis.

The premise here is great. When the credits roll on a giant monster film, after the monster has been dealt with, what happens next? Who cleans up the mess? How do people adapt? Does society go back to business-as-usual? Can it? It’s a shame that these questions ultimately go unanswered.

Nevertheless, let me praise those first good ten minutes. The monster immediately evokes several real-life disasters. Talk of an “exclusion zone” around its carcass recalls several nuclear tragedies; the imagery of soldiers returning home deliberately frames the monster as if it were a conventional war; various voices also ask when life will return to normal, bringing up familiar reactions to covid-19 lockdowns.

At the same time, we have the Prime Minister (Toshiyuki Nishida) eagerly awaiting the day when he can announce the crisis is over. Half-truths and lies are given so he can declare the all-clear, framed by myriad backroom deals to further careers at the expense of public safety. All of this provides terrific ground on which to explore what happens after a major crisis– and is therefore timely as ever.

But then the film doesn’t follow through. What we think will be a film about the aftermath of a giant monster attack is betrayed by its eventual plot. As the film develops, the monster’s corpse throws up new problems from mysterious mould to noxious gas. The movie becomes a series of crises caused by the monster’s body which the JSF must solve, with government ministers scheming away in the background.  In that sense, the monster may as well be alive – it’s still the number one threat in the film. And we’ve seen that elsewhere many times before; this was a chance to explore something new and unique. What do people do in the aftermath? We never find out because the monster is still the focus.

It makes the film’s scope a lot smaller. We never get to see what the wider impacts of the monster’s existence are, or how its rampage has affected society. Maybe this is me getting hung on what I wanted the film to be versus what it actually is, but what it actually is isn’t all that interesting, either. After we’ve been introduced to the scheming, backstabbing ways of careerist politicians, the film doesn’t do anything more with that setup. It’s another good idea that the movie doesn’t quite know what to do with.

The movie also peppers unfunny comedy throughout, and a great deal of it is toilet humour. Don’t get me wrong, I’ll laugh at the bean scene in Blazing Saddles (1974) just like the next guy, but the delivery of the toilet jokes in Dead Kaiju just falls flat. Most of the other jokes do, too. It feels as though the film isn’t confident in taking itself seriously and so undermines itself with daft humour.

Of course, before I finish the review, I must mention the ending. Without spoiling it, it’s a real let-down. The film deliberately draws attention to how contrived it is, perhaps as a get-out-jail-free card to stave off criticism. But criticise it, I will. Almost nothing the film covers in its near two-hour runtime is resolved or reflected on with the “twist” conclusion. It’s the biggest deus ex machina of them all.