Amsterdam seven-piece Personal Trainer have announced their debut album, Big Love Blanket, which arrives on November 4. Following their 2021 Gazebo EP, the record is led by the new single ‘The Lazer’. Check it out below, along with the album’s cover art and tracklist.

Talking about the track, the band’s Willem Smit explained in a statement:

“The Lazer” was one of the first songs we ever wrote together a band. To me “The Lazer” always felt like my big Personal Trainer anthem. We used to have this shifting line-up situation where I didn’t want to rehearse much, so I wanted to make songs that were very easy to play. “Can you play an A chord and a D chord? Do you want to be in my band?” was the vibe. And that’s “The Lazer.”

It’s easily the oldest song on the record, most trainers hate it – that’s probably because we play it nearly every show, and we played it for an hour straight during our 24-hour show last year – but it always stuck with me. It feels like a logical decision to put it on our first long record. 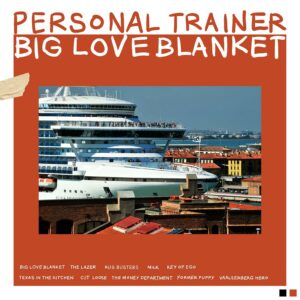