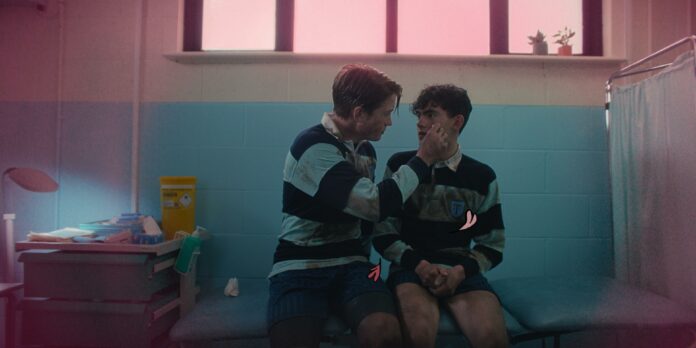 Heartstopper is a Netflix series based on the comic of the same name by Alice Oseman. The comics are set in the same universe as Oseman’s debut novel, Solitaire, as well as her other prose stories, which feature some of the Heartstopper characters. Like the comic, the Netflix adaptation is an uplifting, wholesome story that celebrates queer youth. At the center of the story is Charlie Spring (Joe Locke), a high-strung, openly gay overthinker with low self-esteem. Despite the negativity in his life, including bullying at his all-boys grammar school, Charlie is, for the most part, cheerful and optimistic. When he meets Nick Nelson (Kit Connor), the school’s star rugby player, it’s love at first sight for Charlie, even though his friends insist that Nick’s definitely straight.

Nick and Charlie quickly become friends, much to the chagrin of Charlie’s best friend Tao (Will Gao). Tao is sure that Nick is just like the other boys he hangs around, most of whom have been bullying Charlie since he was outed at school the year before. While Nick grapples with figuring out his sexuality, his rugby lad mates pressure him to date Tara Jones (Corinna Brown), who attends the girls’ school across the road. Tara has just come out as a lesbian, but she’s finding the constant judgment from her classmates difficult to deal with. Meanwhile, she and her girlfriend Darcy (Kizzy Edgell) befriend new student Elle (Yasmin Finney), a friend of Tao and Charlie’s who has transferred from the boys’ school. Some of the most joyous moments of the season see these characters all come together.

The upbeat soundtrack matches the bright tone sustained throughout most of the show’s first season. UK based artists Baby Queen, who wrote “Colors of You” for Heartstopper, and beabadoobee feature prominently across the eight episodes, along with these other fantastic tracks: