Hailey Beavis has announced her debut album, I’ll Put You Where The Trombone Slides, which arrives November 4 via Ok Pal Records. To accompany the announcement, the indie folk artist has shared a new single called ‘Crow’. Check it out, along with the LP’s cover and tracklist, below.

“Looking back at my life, I could suddenly see the pattern, and I felt like the wrong type of animal, always trying to fit the mould and be something for somebody else,” Beavis said of ‘Crow’ in a press release. “But at some point you have to accept your own true nature instead of trying to make it small and hidden. You have to be uncompromising and you have to walk away from things.”

Talking about the album, she added: “I want to throw a rope around every feeling, every moment and haul it around with me just as much as I want to set it all on fire and be free. Making an album seems like the perfect compromise. A place to put it all. I like the idea of all of this abstract emotion perpetually suspended in the act of the trombone being played. It’s quite a surreal thought, yet it’s comforting to me.”

I’ll Put You Where The Trombone Slides Cover Artwork: 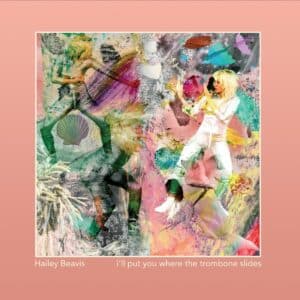 I’ll Put You Where The Trombone Slides Tracklist: