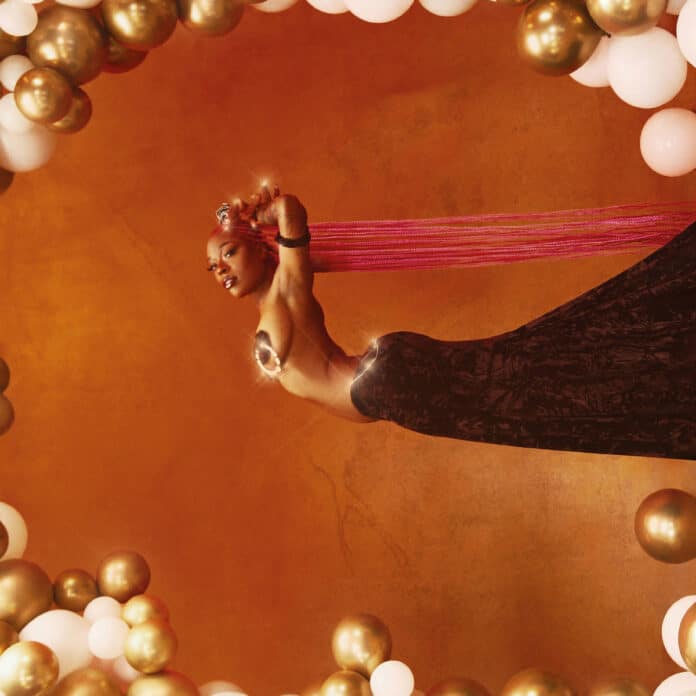 “I got big plans for this home I made,” Sudan Archives proclaims on the opening track of her sophomore album, Natural Brown Prom Queen. She has a whole album’s worth of songs to prove her point, but wastes no time flaunting her conviction. There’s already a strange magic in the air when she invites us to “step inside my lovely cottage,” leaving you to wonder if the description is plucked from a dream – and in the span of five minutes, the song conjures the sense of chaos and comfort of having a space of your own, real or imagined, as well as the pain and loneliness that often sharpens when it’s exposed to others. As shapeshifting percussion, rollicking synths, and fragmented backing vocals populate the scene, the LA-via-Cincinnati artist, also known as Brittney Parks, sounds at home through all of it. In the landscape of her disorienting yet expertly arranged music, messiness is not only a crucial part of the mix, but the only place where it starts to make sense.

In art as in life, things really get complicated when you try to venture out and project some version of yourself into the world – and that’s exactly what the protagonist of Prom Queen, a semi-autobiographical record that follows a Cincinnati girl’s journey to Hollywood, yearns for: a big break, for sure, but also the kind of belonging and intimacy she can’t find in her self-contained bubble. The cinematic scope of Sudan’s work has clearly expanded since her full-length debut, Athena, itself an impressive and forward-thinking fusion of pop, R&B, and hip-hop, and she finds startling new ways to apply her frenetic, genreless approach. The narrative framework allows her to dissect personal struggles without necessarily attaching them to her own self, an exploration that’s as complex and puzzling as it is, for the first time in Sudan’s career, revealing. The album’s dense, lavish opening stretch in particular underscores just how much of her vision is an idealized or fractured projection. Nowhere is this more apparent than on the restless ‘NBPQ (Topless)’, which goes through multiple transformations, and yet, much like the record as a whole, never fully abandons its musical ideas.

At this point, Sudan – or Britt, the character she takes on – is eager and ambitious, steering the way but unsure how to orient herself through every opportunity and expectation coming at her. “Do you know what you feel? Is it even real?” she ponders, in a rare moment of stillness, on the following interlude. As it vacillates between moments of manic expression and lucidity, each song on Prom Queen sets the stage for the next, but not one of its tracks purvey a single mood. On ‘ChevyS10’, the album’s six-minute centerpiece and its most dynamic cut, Sudan drifts through a wide expanse of space, but the closer she pulls a lover looking for escape, the more it locks itself in a groove that’s driving yet unorthodox. After a couple of tracks that are thrilling yet unruly, ‘FLUE’ arrives like a “rude awakening,” and the singer firmly stands her ground: “Why can’t we stay at home/ And find out where we’ve gone?”

The album revolves as much around Sudan’s search for home as it does the sharing of it, both as a reflection of one’s present and the promise of a future. “I gave you my home/ When you was alone,” she sings on ‘Loyal (EDD)’, and it’s that feeling of aloneness that comes back to haunt her on ‘Yellow Brick Road’; both songs end with dreamy, shimmering outros that sound like she’s dozing off into the past. But Sudan never loses focus, whether blazing through insecurities on ‘Selfish Soul’ or steadying herself on ‘TDLY (Homegrown Land)’, where her determination lifts her, however briefly, into a state of rapture. The effect, both dizzying and dramatic, comes into contrast with less heady tracks like ‘OMG BRITT’ and ‘Freakalizer’, which are not only infectious but serve their own purpose in the story. On the surface, ‘Freakalizer’ is playful and flirty, yet also houses some of the album’s most vulnerable confessions (“I don’t wanna be alone,” “I just wanna be real close”) before ‘Homesick (Gorgeous and Arrogant)’ lays them out in the open.

The last section of Natural Brown Prom Queen is fuelled by desire in ways that highlight the album’s progression, moving from dizzy ambition to true self-assurance. But not even the final track, ‘#513’, which is named for her hometown area code, attempts to tie it all together – perhaps an unsurprising choice for an artist who rarely settles in one place for too long, but still a bold one in the context of a sprawling 18-track LP. Yet in a satisfying, almost endearing way, it feels like a kind of homecoming, that constant process of sweeping out all the obstacles blurring your visio. “I’m too rooted in my ways,” she admits, which comes off as anything but a constraint: it’s only by knowing exactly where she stands, and where she’s been, that she’s able to carve her path forward.