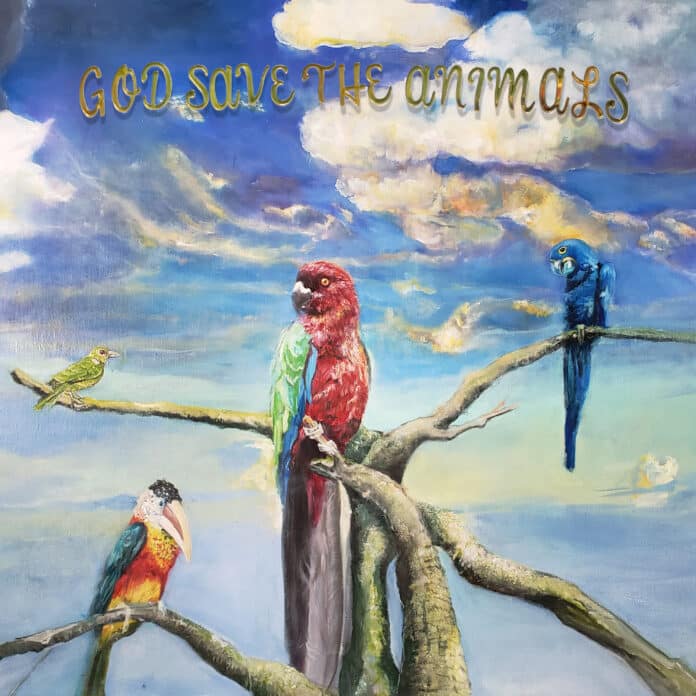 Most people find it hard to reconcile mystery and meaning. You can spend hours obsessing over the thing that beguiles you, but often that doesn’t say much about your personal investment in it, the kind of thoughts and feelings it really stirs up – or how these might vary from one person to another. In Alex G’s music, as in most great art, those qualities are intertwined; you can’t get to the truth without obscuring or distorting it a little bit. But because of the perceived cryptic nature of his songwriting, as well as his own reluctance to decode it, Alex G’s discography has been subject to intense scrutiny and analysis that usually sidesteps the role of the subconscious, of absurdity, and even feeling. Since his debut on Domino, 2015’s Beach Music, the musician otherwise known as Alex Giannascoli has brought more structure and focus into his craft, refining it so that the immediacy of his melodic and aesthetic sensibilities shine through. His latest album God Save the Animals is the natural culmination of this, a mesmerizing record that’s replete with questions but never shrouds itself in them. As difficult as it is for its cast of characters to carve a single path, it’s never been easier for the listener to follow along.

God Save the Animals circles around a lot of the same themes that have percolated in Alex G’s music in the past – morality, innocence, hope – but rarely with such vivid clarity and wholeheartedness. Mirroring the sweet psychedelia of 2019’s House of Sugar but inching closer to pop, it stands as his most approachable set of songs to date without diluting his eccentric personality. Catchy melodies abound – especially in the album’s pre-release singles – but hand the stems of ‘Runner’ or ‘Miracles’ to any other writer and they might instead come up with bad copies of Soul Asylum’s ‘Runaway Train’ or any Sufjan Stevens song, respectively. Alex G renders them distinct not just through his left-field production choices, but by stripping them of their nostalgic potential and weaving them into the sonic fabric of the album. You might be able to trace ‘Blessing’ back to a time when Christian rock and alternative metal thrived harmoniously in the mainstream, but I’d venture it’s because you’ve come across the New York Times profile where he talks about God and Audioslave; taken on its own, it’s a disorienting outlier that uses biblical language to evoke the murky line between impending catastrophe and transcendence.

The album is full of character and emotion, but as with Alex G’s previous releases, there’s more than just one of them, even within the span of a song. Sometimes the vocal layers are characteristically mutations of Giannascoli’s own, sometimes there are others creeping into the frame – the distinction is hardly significant, and is often downplayed. On opener ‘After All’, he duets with Jessica Lea Mayfield, their voices folding and fading into each other to otherworldly effect, introducing the record’s spiritual crux: “People come and people go away/ Yeah but God with me he stayed.” To the extent that Giannacoli has discussed the influence of religion, it’s through the lens of someone paying witness to, and becoming curious about, how it manifests in the people close to him. Switching perspective in the chorus, he gets to the core of how faith illuminates a person’s life: “In the years you feel the most alone/ You will build the walls I climb.”

God Save the Animals paints devotion as a possible antidote to horrifying dread, whatever its source might be – the stifling comforts of isolation, the loss of innocence, the dangers of escapism. On ‘Mission’, Giannascoli’s girlfriend, the violinist Molly Germer, jumps in with a meta comment, singing, “Hey, look in the mirror/ Ain’t gonna right your wrong with a stupid love song.” The songs on the record aren’t exactly inward-looking or contemplative, but their wondrous demeanor does reflect the openness that comes with a certain kind of soul-searching, which is reinforced by the more pristine quality of the recording. For the first time, Giannascoli recorded the album in several professional studios, and its playfulness has a different flavour than the kind that’s defined his prior output; it feels more purposeful. The characters are either lost, on the go, or caught in a spiral, but whenever fear or shame threatens to swallow them whole, as in ‘Cross the Sea’, the music pushes back, striking through the dissonance.

At this point in his career, Alex G seems equally enthralled by the power of vulnerability and subversion. “Naked in my innocence/ Tangled in my innocence,” he warbles on ‘S.D.O.S.’, his voice ghastly and unrecognizable, capturing a tension that runs throughout God Save the Animals. He revels in the directions the songs take him in, like when the simple affirmation of ‘No Bitterness’ – “My teacher is a child/ With a big smile/ No bitterness” – lends itself to hyperpop glee. ‘Ain’t It Easy’ finds a similar kind of joy in the mundane, in the routines and conversations that keep a relationship alive. God might not be an explicit part of the picture the way he was at the start of the album, but there’s less of a burden to love and forgiveness. There are questions, too, and still: “Haven’t I given enough? When will I run out of love?” Rather than chasing them down, though, Alex G invites us to ride a wave of infinite possibilities.

Album Review: Alex G, 'God Save the Animals'Most people find it hard to reconcile mystery and meaning. You can spend hours obsessing over the thing that beguiles you, but often that doesn't say much about your personal investment in it, the kind of thoughts and feelings it really stirs up –...