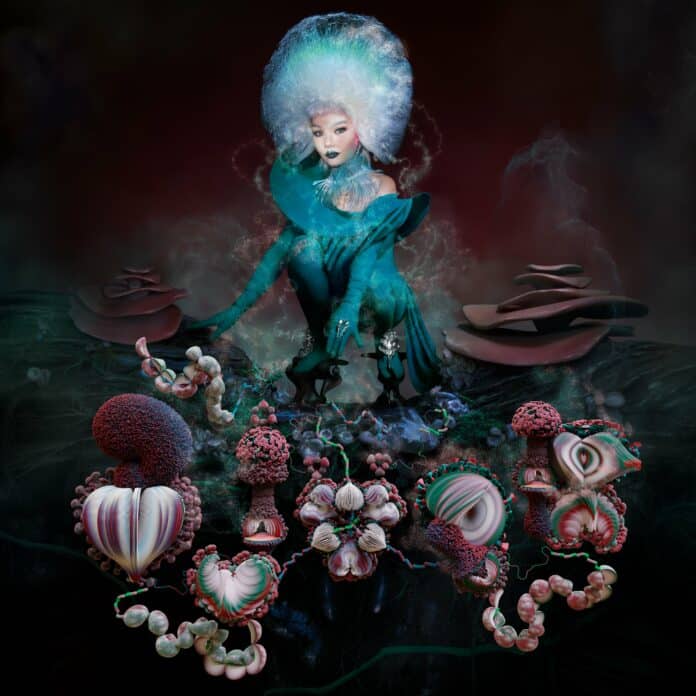 Fossora, in Björk’s own terms, means “she who digs.” The Icelandic iconoclast’s tenth album has been framed as her return back to solid ground, anchoring itself in earthy beats and dark, muddy textures after the kaleidoscopic fantasia of 2017’s Utopia. That album, too, was a dense excavation of feeling wrapped in the sounds of the natural world, taking flight without ever abandoning its aerial, free-floating perspective. In that sense, the journey to Fossora, which assumes a more evocative than literal relationship with its environment, isn’t hard to trace. Naturally, however, any attempt to describe the album through a single lens is likely to fall flat; Fossora is a particularly challenging and beguiling listen, and anyone anticipating a relatively “grounded” experience will find that Björk is, unsurprisingly, more interested in the thorny implications of the verb “digging.” She gives us a hint early on, titling the first song and lead single after the Greek word for placelessness.

But the world she fashions is still not impenetrable. Fossora‘s 13 tracks might feel disparate at first, both fizzy with curiosity and heavy with desire, unbound yet not entirely disconnected from the shadow of grief that hung over her previous albums. In her search for stability, she finds roots in each expression of herself and embraces them in ways that are fluid, inquisitive, bemusing, and at times devastating, but not quite as solipsistic or distant as Utopia, in its more explorative stretches, could be. There are moments that engage with the album’s mushroom theme through playfully unnerving musical experiments (‘Mycelia’) or knotted metaphors (‘Fungal City’) that, in isolation, don’t necessarily add much of substance. But strung together, and over repeated listens, it’s hard not to be enraptured by the discoveries that come alive as Björk and her collaborators burrow deep beneath the surface, unraveling in an underground network punctuated by bass clarinets and gabber beats.

‘Allow’, a song that dates back to the sessions for Utopia, could have easily felt out of place. Weaving Björk’s yearning vocals with the gentle cooing of Norwegian singer-songwriter Emilie Nicolas, its soft romanticism finds a home in the cradle of Fossora, which opens itself to the possibilities of new love. Earlier on the album, she maps out her definition love on ‘Ovule’, where hypnotic percussion made in collaboration with Sideproject clashes with majestic fanfare and El Guincho’s reggaeton production. Rather than getting lost in some futuristic vision, though, the song ultimately lands closer to the murky realities of the present: “Now with your romantic intelligence, the sensual tenderness/ We dissolve old habits and place a glass egg above us floating.” The language is symbolic and ambiguous, but its physicality also feels palpable, as does the horror of ‘Victimhood’, the track that precedes ‘Allow’. While her interrogation of the shadow self can seem alienating and guarded, the ominous and slippery landscape she builds around it feels inescapable as it transforms into a chaotic abyss.

Despite the aggressive techno influences that creep in on songs like ‘Trölla-Gabba’ and the title track, Fossora never quite erupts in the ways you might expect, but it never deflates or meanders too much, either. For all the signifiers that have been thrown on top of it, the album explores grand ideals – hope, connection, homeland – not as separate destinations but combined vessels for growth, which explains its intricate sonic architecture. “If we don’t grow outwards towards love/ We’ll implode inwards towards destruction,” Björk warns on ‘Atopos’, a guiding principle she uses to extend beyond the limits of herself and her past. This threat of self-immolation is embedded even in the safe haven of the heartfelt ‘Freefall’: “If we cling to what we used to be/ It will burn our soul.”

While she plays with perspective, Björk never loses sight of the heart of the record, whose two most moving songs are placed right at its center. ‘Sorrowful Soil’ and ‘Ancestress’ are both masterful tributes to her mother, the environmental activist Hildur Rúna Hauksdóttir; one is described as a eulogy, the other an epitaph. Here, Björk draws from and upends tradition in much the same way that she wrings emotion out of archetypal ideas and loose structures: through space, and with compassion. Instead of presenting a dry list of facts about her life, ‘Sorrowful Soil’ imagines a matriarchal obituary full of strangely resonant observations that transcend a single person, augmented by the surging voices of Björk’s childhood choir, the Hamrahlíðarkórin. “You did your best, you did well,” they insist, breaking up not in a show of hesitation but firm reassurance.

‘Ancestress’, which features vocals from Björk’s son Sindri, merges her fantastical poetry with more concrete and personal memories. Her remembrance is sparked by idiosyncratic detail that reveals a universal need to see herself through her lineage: “She invents words and adds syllables/ Hand-writing, language all her own.” Yet it is also a striking and uncompromising portrait of a dying rebellion – or rebellion toward death. The album, though, doesn’t end in a note of resignation. Mushrooms are known for relying on decaying matter to absorb nutrients and make their own food, a process that is key to their growth as well as the interconnectedness of the ecosystem. Fossora is the embodiment of this cycle. “There’s fear of being absorbed/ By the other,” Björk sings, and every so often, it is uprooted by hope.

Album Review: Björk, 'Fossora'Fossora, in Björk's own terms, means "she who digs." The Icelandic iconoclast's tenth album has been framed as her return back to solid ground, anchoring itself in earthy beats and dark, muddy textures after the kaleidoscopic fantasia of 2017's Utopia. That album, too, was...