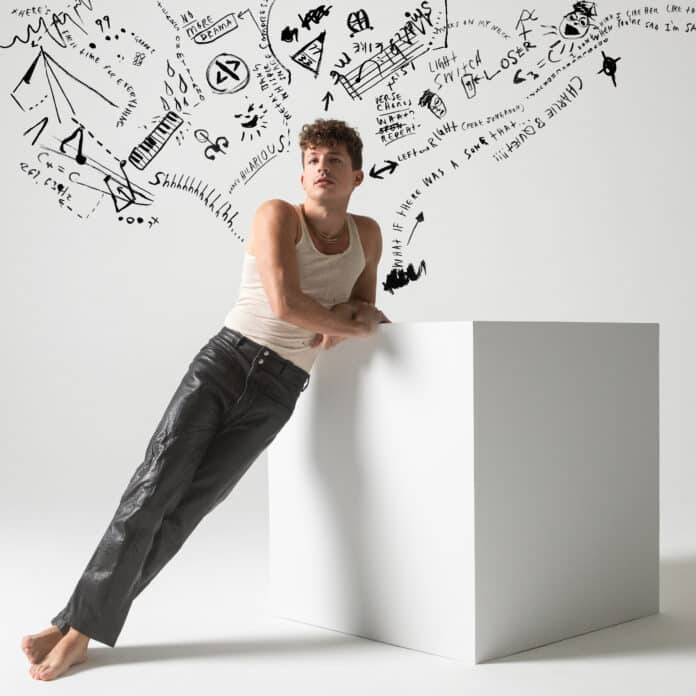 In his eponymous third studio album, Charlie Puth has decided to formally reintroduce himself. Some would say this is a smart move: although his first single, 2015’s ‘See You Again’, brimmed with promise, both his debut album Nine Track Mind and its successor Voicenotes garnered lukewarm reviews. In the hopes of finally dominating the pop scene in the manner he has long envisioned, Puth began to dominate TikTok, placing particular emphasis on his enthusiasm for transforming arbitrary audio into clever production (including, but not limited to, the sound of a plumber fixing his toilet). CHARLIE is certainly a masterclass in catchy, polished pop, but as a project conceived and tirelessly documented on the internet, it feels ultimately insubstantial, lacking the depth and illustriousness that would truly catapult Puth to stardom.

Recounting a tale of heartbreak, the album swings from longing to swaggering temerity, with Puth’s vibrant production engendering the constant assurance of his own resilience. The first track, ‘That’s Hilarious’, opens deceptively with despondent verses and slow, trembling synths, yet its choruses are propelled by a pulsing club beat and peppered with pitched-up laughter that replaces any anguish with contempt. ‘Charlie Be Quiet’, a particularly convivial track, follows much the same pattern, showcasing initial bashfulness with whispered vocals but erupting soon after into Puth’s trademark falsetto like a battlecry. “Won’t be putting my heart on display,” he announces, “I’ll just water my feelings down.” A combination of punchy drums and seething electric guitar recalls early 2000s pop rock, blurring the sharpness of Puth’s derision into a kind of jauntiness. Yet the energy of his production leaves no room for vulnerability, displaying just enough emotion to deepen the colour of his eventual confidence.

This record is, however, undeniably colourful, since Puth is so skilled at crafting high-octane radio hits. ‘Light Switch,’ the lead single, offers exuberant keys and a vigorous dance beat, but the track feels formulaic, almost frustratingly slick. Though this is perfect pop, Puth makes you wish for something messy rather than mechanical. A hint of tenderness surfaces in ‘Smells Like Me’ as he contemplates his lover’s loss, but the wistfulness of the plea, “Don’t forget about me ever” pivots into a forceful chorus as he admits, “I hope the memory’s killing you over there,” reasserting his own proud disdain. He opts for a more light-hearted presentation of longing in ‘Left and Right,’ joining forces with BTS star Jung Kook. Thanks to some clever audio panning, this track unfolds like a game of hide and seek as the pair try to shake off memories of heartbreak. Splashes of heavy kick drum, fraying slightly with distortion, bring some intensity but fail to inject much excitement. It begins to feel as if what was offered by Puth’s TikToks hasn’t quite materialized in the album itself.

The latter half of the project is nevertheless enjoyable, with ‘Loser’ standing out as one of its most engaging tracks. Emulating the superb bassline of ‘Attention’ – still Puth’s best single to date – ‘Loser’ is spurred on by subtle funk, with a hook that is enduringly catchy. The lament, “I’m such a loser/ How’d I ever lose her?” is orbited by swirling 80s keys and layered with harmonies as the track becomes a dizzying light show, all vibrancy without gaudiness. ‘I Don’t Think That I Like Her’ is similarly accomplished, with another delightful bassline coupled with a surprisingly gritty drumbeat. This feels like genuinely fresh pop, and there is a real narrative here, a story eager to be told: “Meet her parents, meet her brother/ Then she starts sleeping over the crib on weekends,” Puth recalls, before tragedy strikes as “the stars are aligning/ But for her, it’s bad timing.” He is at his best, it seems, when he leans into earnestness rather than flashy egotism – although earnestness doesn’t quite land in the album’s only ballad, ‘When You’re Sad I’m Sad,’ which betrays a sense of hollowness despite Puth’s honeyed vocals. The track floats, mournful and measured, requiring some gravity that Puth can’t reach, some solemnity to weigh it down. It is clear that he cannot truly commit to any ugliness, any unchecked feeling, making it difficult for his work to feel truly groundbreaking.

The project closes off with ‘No More Drama,’ a playful track turning from nostalgia to breezy optimism, unburdened by longing or bitterness, as Puth attempts to solidify his position as a pop powerhouse. But he hasn’t quite hit the mark here: between his feverishly energetic TikToks and the icy-cool songs behind them, he has sacrificed simplicity and raw feeling. Perhaps there’s a ruggedness that’s worth more than all the glinting edges and the shimmer of these tracks. For all its liveliness and glamour, CHARLIE seems to prove that capturing attention in thirty-second videos doesn’t always translate to a memorable full-length release.

Album Review: Charlie Puth, 'CHARLIE'In his eponymous third studio album, Charlie Puth has decided to formally reintroduce himself. Some would say this is a smart move: although his first single, 2015’s ‘See You Again’, brimmed with promise, both his debut album Nine Track Mind and its successor Voicenotes...