Neil Gaiman and Australia’s FourPlay String Quartet have announced their first collaborative album, Signs of Life. Featuring lyrics, music, and backup vocals by Gaiman, the record is due for release on April 28, 2023, via Instrumental Recordings. Two songs from the album, ‘Bloody Sunrise’ and ‘Credo’, are out today. Lara Goodridge takes on lead vocals on ‘Bloody Sunrise’, which is accompanied by a video from Australian director James Chappell. Check it out below.

Neil Gaiman and FourPlay String Quartet’s first collaboration came in 2010, when Sydney Opera House’s Graphic Festival commissioned the quartet to write a soundtrack to Neil’s novella The Truth is a Cave in the Black Mountains. In a press release, Gaiman said:

I’m not entirely certain when I fell in love with a string quartet. I remember our first date, though. It was a day spent in a tiny room somewhere in the backstage maze of Sydney Opera House. We played the next night on the stage of the Sydney Opera House. It was remarkable. It was so much fun we did it again. We did a tour together, but when we reached Carnegie Hall, we decided we needed something better than me reading a poem as our encore, so we stole some time from soundcheck and rehearsed a song. And then we performed our song on the stage of the Carnegie Hall, and that felt a lot like something special. We started to build a repertoire, and when I was in Australia we would make music together. These are some of the things we’ve made together. It’s been a long fallow winter, the last two and a half years. Here are signs of life.

FourPlay added: “Neil’s mastery of storytelling, and his crafting of words, is second to none. Among the members of FourPlay, we have been fans of Neil’s for many years, and t was a golden opportunity to work with him. Nevertheless, we could never have expected to find him to also be such a master of pacing, such a musical performer and wordsmith. We’re joyful to count him as a friend as well as a collaborator, someone we spend pleasurable time with and someone we never fail to create beautiful, glittering things with.” 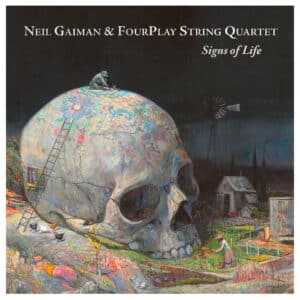