Black Honey  – the Brighton quartet comprising frontwoman Izzy Bee Phillips, guitarist Chris Ostler, bassist Tommy Taylor, and drummer Alex Woodward –  have announced their third album. A Fistful of Peaches is out March 17, 2023 via FoxFive Records, and lead single ‘Heavy’ is out today, alongside a music video directed by and starring Drag Race UK’s Dakota Schiffer. Watch and listen below.

“We wrote this song the day I found out the founder of our fan club passed away from Covid-19,” Phillips explained in a statement. “We were talking about the weight of grief and the way it holds you down, about the parallels between grief and depression. The weight of mental illness and how it brings you a deeper understanding of grief. There’s always a glimmer of light though and I love how Heavy has that kind glitter darkness. It’s in my nature to become co-dependant and I think in this song I’m reaching for someone to help me climb back out. I talk a bit about the never-ending story as it was my first dialog with death and depression as a child. Watching Artax the horse getting swallowed by the nothing whilst Atreyu screamed helplessly from the edges of a swamp really spoke to me.”

Commenting on the song’s visual, Dakota Shiffer said: “For my directorial debut it was crucial to me that Heavy centred around the themes of trans femininity. A self-portrait of a struggling trans person who’s exterior appears alluring and glamorous but is constructed out of a need for survival. That survival has led many trans people in history to endanger themselves in pursuit of euphoria. The showgirl aesthetic, the location, and the pastel colour pallet puts the creative firmly in a distinct era but everything is not as it appears. Writing the lipstick on the mirror as a reference to Butterfield 8, an infamously misogynistic movie starring Elizabeth Taylor, is the finale to a dreamscape of an evening in which the song narrates perfectly.”

A Fistful of Peaches will follow Black Honey’s 2021 album Written & Directed. “If the vibe of Written & Directed was creating this whole Tarantino world and this safe space of me almost refusing help and saying I was fine, then with this album it’s the opposite,” Phillips commented. “Lockdown had happened, I’d had two years of not writing anything and feeling like my entire purpose had gone down the drain, I’d been in intense therapy which was exhausting, and what came out was just me regurgitating things from my entire life and building my brain cells back to how they should be. I’ve had to be more honest and vulnerable with myself, but I feel like I’d be disservicing anyone who spends their time and passion and energy into this project to not fucking unveil it all.”

A Fistful of Peaches Cover Artwork: 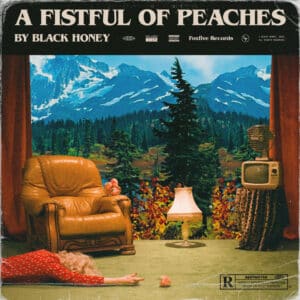 A Fistful of Peaches Tracklist: